Longtime community members fight for their neighborhood one block at a time in Harrowgate. Repelling drug dealers, moving addicts along and fighting opportunistic slumlords starts less with city-wide policy and more with in-person communication and leading by example.

Local civic association leaders like Shannon Farrell and Jim Ridgway do it neighborhood-wide. But it’s the block captains like Diane Smalls that fight the smaller battles to win the war.

“Somebody’s gotta do it,” Smalls said. 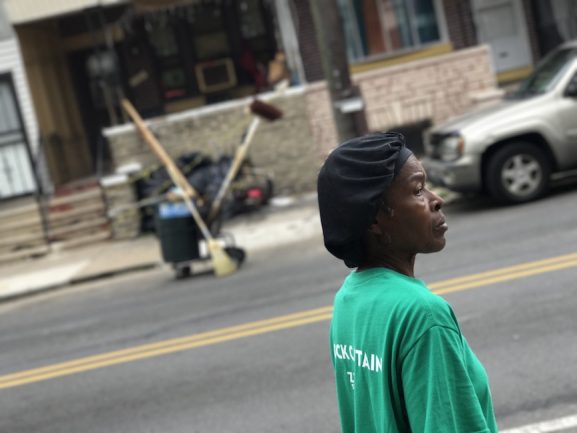 Smalls (above), 65, organizes the block cleanups for the 3600 block of Frankford Avenue. But while she was elected block captain by more than half of the block’s residents, she often finds just Ridgway (her assistant block captain, below) and herself for cleanups.

“I shouldn’t be out here with all the shit that’s wrong with me,” Smalls said, but she points out that others have it tough too. “A lady down the street [has] diabetes. She used to help. Then they cut some of her toes off. I have to tell her husband to keep her inside.”

“You don’t see my neighbors out here,” Smalls explained. “If you see them they’re walking in their doors … or sitting on their porch.”

She’s even seen them walking over trash to get there. 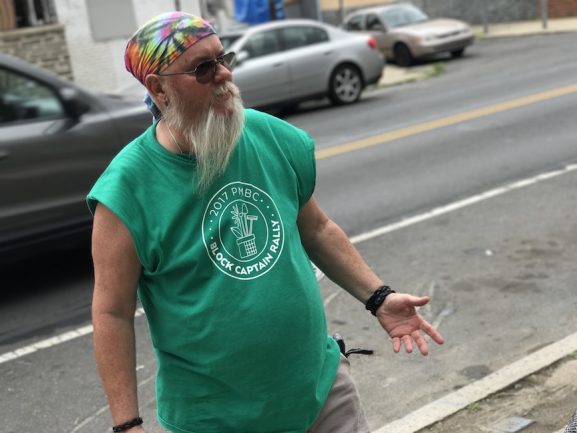 Farrell, whose own block gets good turnout for cleanup day, decided to call in reinforcements for Smalls and Ridgway.

Buddy Osborn, senior pastor at Rock Ministries, had already informed several community leaders that he intends to have his people help clean 25 blocks this summer. Farrell called him for assistance at 3600 Frankford, so there’s only 24 more to go.

Osborn said his group wants to be in the community to help anyone who needs it.

“We’re a fixture in the community,” Osborn said. “So when there’s a project that comes up we want to be a part of it. We want to be quiet but effective servants.”

“All throughout the year we have missionary teams come in from around the country,” Osborn said.

Osborn had a group visiting from Central Pennsylvania. They met up at Small’s house on Frankford Avenue, donned gloves and grabbed shovels.

Why come all the way to Philly to pick up cheesesteak wrappers rather than cheesesteaks? 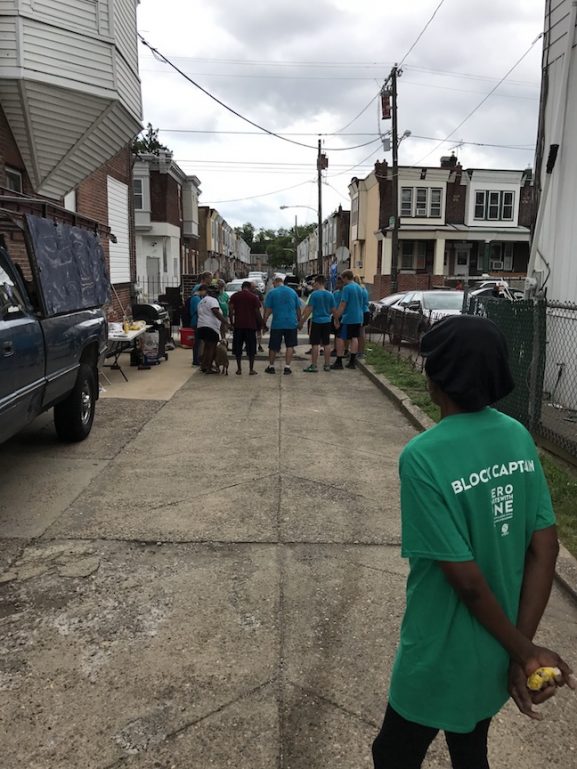 “They’re so amazed,” Osborn said. “Because I find that when you teach a kid to serve he becomes a better citizen. When you take your eyes off yourself and put them on somebody else it’s always a great training mechanism to teach a kid character and … good work ethics.”

Of course cheesesteak wrappers aren’t all that’s found. Harrowgate finds itself near ground zero for the opioid crisis.

“They found needles over there,” Smalls said, pointing up the street.

Sandra Miranda, a clean block officer with the Philadelphia More Beautiful Committee (PMBC), said citizens have to “fight the blight” one block at a time.

PMBC provides brooms and bags for block captains and arranges for trash pickup toward the end of the block cleanup.

Osborn said block cleaning is just part of it.

“If there’s a woman on the street that’s a prostitute, we can find them help,” he said. “An addict? He’s got help. A young kid up against it caught up with something? We have counselors, we have chaplains that are there at the drop of a dime. [And] It’s not only us here. There’s really fine organizations that do a lot of work in this area … and we’re just privileged to be one of them.”

Smalls’ work wasn’t done however. A house across the street from her caught fire the night before and the homeowners had all of their burnt belongs sitting outside the home waiting for an insurance agent.

Looking at Barbara Burnam, it’s hard to believe the 75-year-old woman has much influence and control over her community. However, for the past 50 years, “Miss Barbara” Burnam has served as block captain for the [continue reading…]

Fishtown: A Haven for Female Musicians

Tucked away on Frankford Avenue, there is a movement growing where girls can tune their guitars as well as tune up their girl power. Girls Rock Philly is the neighborhood spot where girls, ages 9 [continue reading…]