A bell rang in the distance.

The neighborhood was quiet at first, a cool breeze rustling fallen leaves through Stinger Park. Within minutes, the dynamic changed. Children and young teens came barreling through the quaint park from Alcorn Elementary across the street and their high school counterparts strolled casually down the sidewalk.

School was out, and the not-so-subtle bliss radiated through the neighborhood.

Specifically, he knows what happens when youths are left to their own devices after school hours. It is well-researched that following the final school bell is when youths are most likely to be involved with serious criminal acts. Nationally, the youth crime rate doubles during peak hours of 3 p.m. – 6 p.m. In Philadelphia, it nearly triples.

Holmes is the Center Director of the new Grays Ferry Police Athletic League (PAL) that opened inside the Salvation Army facility on 33rd and Reed Streets in October. PAL is a citywide program aimed at connecting police officers with kids in order to reduce juvenile crime in the community.

“A lot of times kids just want to be here because they know they don’t want to be in the streets and doing the things that their peers do,” Holmes said.

Holmes worked at the Audenreid PAL down the street from the new center until it closed in 2014. The new center PAL filled a need very specific to South Philadelphia, — a safe place to play basketball.

“This has been going on for generations, but the PAL isn’t generational, so now that it’s here hopefully we can break that cycle of the generational violence that they have been exposed to,” Holmes said.

Finnegan Playground is the only basketball court within a mile of the closed center, which is an unsupervised, public court. Vare Recreation Center is the closest drop-in center, located in the next neighborhood over, Point Breeze. 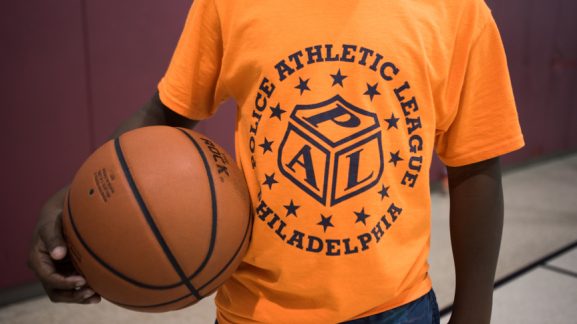 He was struggling in his senior year of high school before he joined the now Audenreid PAL Center when Holmes was the center director. Nelson said coming to the PAL helped set him straight, and he wanted to get back. Nelson now serves as the Attendance Director at the Grays Ferry Pal Center.

Grays Ferry comes in as the neighborhood with the seventh highest violent crime rate in Philadelphia, totaling 1.46 per 1,000 residents in 2016.

“Around my age bracket, 25 and under, that’s where all the trouble comes from,” Nelson said. “The young guys these days don’t know what to do but kill each other to get a name. When you come in here, it’s like more motivation.”

In 2013, the City of Philadelphia produced a Strategic Plan to Prevent Youth Violence. PAL is just one of the programs working towards the city’s goal to encourage youth development, education and meaningful engagement.

The plan outlines that by creating healthy relationships with adults, kids will keep out of trouble, and ultimately avoid altercations with the juvenile justice system.

According to the Afterschool Alliance, the community-based supervision provided by after-school programs is effective in improving personal, social and academic skills. 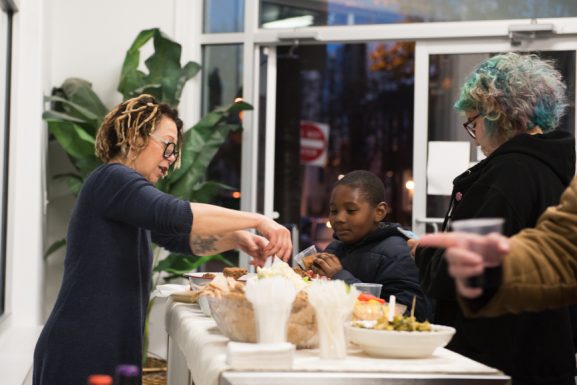 Maria Pandolfi, an art teacher at the Juvenile Justice Center, believes art enhances critical thinking skills because creating requires decision making. Whether it be choices of color, subject or medium, her students make a choice and stick with it.

“We want the kids to think on their own,” Pandolfi said. “To be rebels with a cause. I tell them they have to stop the school-to-prison pipeline, and the only way to do it is by fighting with your brain.”

Pandolfi says she was somewhat of a problem child – it took some time to find her path. For her, art was the catalyst to stay in school, and go on to college.

“Art taught me to use my inner rebellion,” Pandolfi said. “Instead of using it to do bad I get to use this energy in a way that helps instead of hurts.”

Pandolfi is also a former art teacher at Childs Elementary School in Point Breeze. After 26 years, she developed a relationship with her students who often hang out around her house.

When the art program was cut in 2013, the neighborhood kids were devastated, Pandolfi said, and she was determined to do something about it.

She and her former student teacher, Ron Kustrup, started the KIND Institute which stands for Knowledge Inspiring Non-Violent Decisions. The program began in Sept. 2013 though Ron Kustrup says it took two years of sitting around Pandolfi’s kitchen table, sketching it all out. 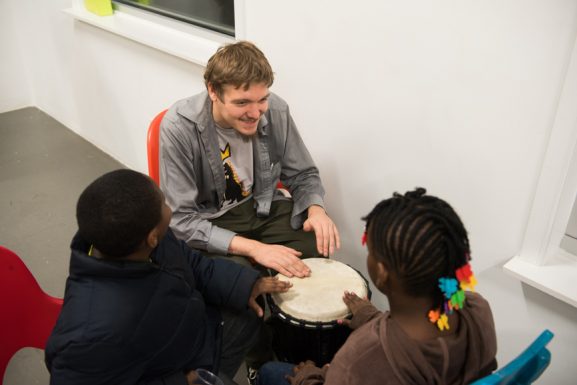 “Kids need an outlet after school to go to,” Kustrup said. “A lot of kids like to go to the park or the basketball court. Communal places. If it’s not a facilitated program or an event happening, the kids are all going there to meet up. It tends to be really rough.”

Kustrup, who also teaches art at West Philadelphia High School hears the evidence from his students. Even if it’s a good day, Kustrup’s students will tell him they can identify the violence in the neighborhood.

“There’s no one facilitating productivity,” Kustrup said. “So they all go out and make up ways to get creative on their own. Without facilitation as a youth, it often ends in violence.”

A study by the YMCA Teen Action Agenda, showed youths who do not participate in after-school programs are three times as likely to use drugs and alcohol.

Kustrup is a firm believer that the therapeutic nature of art provides youth with an outlet for their emotions. He often sees kids that come into the studio are going through tough times at home due to the incarceration of family members.

Point Breeze: Volunteers Pitch in for Cleanup Day at the Saved Me Dog Adoption Center

[vimeo:https://vimeo.com/52951427] Seniors in the Haddington section of Philadelphia recently attended the first annual Gospel Festival, hosted by the neighborhood’s Multi Services for Older Adults. Sudell Black, president of the choir, organized the festival. “I was chosen [continue reading…]