Since 1910, the Boys Scouts of America have been shaping young men from all over the nation into the next leaders of our country. At the Oak Lane Presbyterian Church, the scouts of Troop 19 are taught how to be responsible, knowledgeable, and self-sufficient with the help of their head Scoutmaster Alvin Mitchell and his assistant Scoutmasters, Thurmond Matthews and David Willis.

Troop 19 consist of 15 members that meet twice a week at the Oak Lane Presbyterian Church where they engage in community service activities and lessons that teach them about the elements of Boy Scouting. According to their website, the Boy Scouts of America exercise an advancement program that consists of seven ranks with specific lessons and requirements. Each rank has a series of merit badges, medals and patches that symbolize and embody what it means to be a Scout.

“There’s no physical fitness training in schools anymore and this program challenges the boys to have strength and responsibility,” said Mitchell. “My job is to help these boys build character and to be there for them whenever they need something. We’re like family.”

The Scouts of East Oak Lane belong to the Cradle Liberty Council that charters the group through the Oak Lane Presbyterian Church in East Oak Lane. There are approximately 28 million Boy Scout members all over the world that are working towards increasing their rank while developing into mature, young men.

According to Mitchell, being a Boy Scout from Philadelphia is a rarity that most people don’t know much about. Mitchell’s wife, Earlene Mitchell, has been a dedicated chair of the Scouts’ committee for over 25 years and said that she knows why there’s a lack of awareness and involvement with Boy Scouts.

“The boys are my passion and I say it’s some of the parents that don’t want to get involved in the activities with the boys because they figure ‘Boy Scouts is a girly group’—but it’s not,” said Earlene Mitchell. “They want them in basketball, baseball, football…but when you’re in Boy Scouts you don’t sit on the bench…you are involved from day one.”

The parents of Troop 19 meet every Saturday to discuss fundraising, finances, and upcoming events and activities for the boys. Tamika Beal, who is the Troop’s fundraising coordinator, enrolled her son, Tymeer A. Beal in Boy Scouts as an alternative extracurricular activity that would better suit his intellectual caliber.

“He isn’t a kid that’s into sports; he’s a thinker. A lot of boys play sports and I thought that because he’s a boy he should be doing that, too; but he likes to use his brain and his hands so when I heard about the troop, I immediately knew that I wanted to get him involved,” said Beal.

According to city data, in 2013, East Oak Lane had a dense population of 19,526. East Oak Lane is a predominately African American community that is commonly referred to as a suburban neighborhood of the city.

The Troop currently has 3 members from the East Oak Lane community while the rest come from surrounding areas within Philadelphia. With boys coming from different communities, they each have a different experience and reason for joining the East Oak Lane troop.

Danielle Hall is Troop 19’s financial advisor for the committee and is from North Philadelphia, where she claims the neighborhood isn’t safe. According to the Philadelphia Inquirer, 70 violent crimes were reported from May 10 to June 9 of this year, that involved homicide, rape, robbery and assault.

“I’m from North Philly and before meeting the Mitchells I never even grasped the concept of a black Boy Scouts group because that’s not what you hear about. I wanted to get my son involved in something that kept him off of the streets because where we’re from everyone’s on the corner and I wanted something different for my son.”

Mr. Mitchell said that the troop has been struggling with recruiting new members of their committee board.

In order to become a Boy Scout committee member, the organization requires the volunteers to go through a series of intense training programs and background checks to ensure the safety of the boys. The Mitchells plan on retiring within the next five years and are looking for dedicated parents to fulfill their positions.

“One of the biggest issues in scouting is recruiting new committee leaders; especially in black families,” said Mitchell. “They don’t want to get involved. You have to be dedicated and it requires a lot of time.” 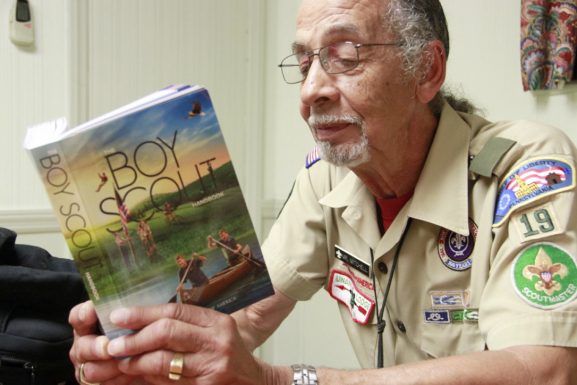 With Philadelphia’s crime rate being higher than the national average, getting the youth involved with Boy Scouts can serve as a solution to inspire and educate the youth while keeping them out of trouble.

The committee members of Boy Scouts Troop 19 work relentlessly on getting the community involved in their program. Every year, the Oak Lane Community Action Association host Oak Lane Day, where the committee members and scouts meet to set up a information table about what it is the Boy Scouts of America do to better the youth and the community. Unfortunately, throughout the years of joining OLCAA’s Oak Lane Day, the troop has only generated one new member from the annual event.

Despite the lack of initiative coming from the community, the current committee members of the African American Boy Scouts troop continue to inspire and teach the boys how to rise up against limitations through hard work and persistence.

https://vimeo.com/24782193] Assistant vice president of the Federal Reserve Bank of Philadelphia is a far cry from running a small business focused on organic tea. Howard James, the owner and operator of Tea Country, saw an [continue reading…]

West Oak Lane: Five Things That Bring The Community Together

West Oak Lane is home to many community centers, churches and offices that serve as gathering places for its residents. The West Oak Lane area is focused on building “community” by bringing residents together through different opportunities in the [continue reading…]

Homelessness is nothing new and for Raise of Hope, Inc. founder Habeebah Ali the issue resonates on a personal level. As a survivor of domestic violence and someone who was once homeless, Ali knows how [continue reading…]