Manayunk isn’t a neighborhood widely known for its role in the arts, but residents like Jane Lipton, executive director of the Manayunk Development Corporation (MDC), would like to see that perception change.

“We would like people to realize that art is everywhere in Manayunk,” Lipton said.

Portraits of people from Manayunk, painted by Mat Tomezsko can be found on buildings up and down Main Street, a business district with a growing number of art galleries, such as The Bazemore Gallery and Orbit Art. Though fading, paintings of turtles inhabit some crosswalks, and even the trashcans, lined with images of frogs and other wildlife, bear artistic merit.

But, some of the most extensive artwork in Manayunk lies beyond the attractions of Main Street. For example, an area mostly unfrequented by visitors to the neighborhood, the Fountain Street Steps, a connection between Umbria Street and the Manayunk Towpath, boasts an array of murals and mosaic artwork. 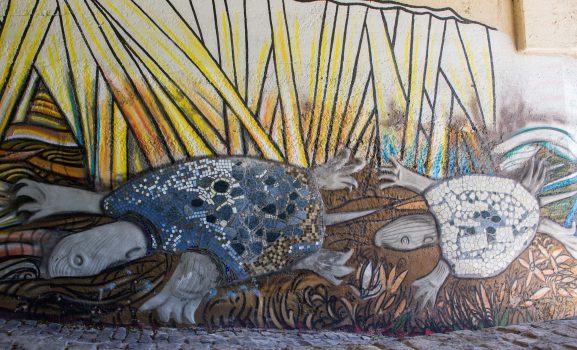 Blaise Syrnick, a local resident and member of the neighborhood association Ivy Ridge Green, remembers the rundown state that the steps were in 25 years ago.

“This was an urban jungle,” Syrnick said from the top of the steps.

Syrnick said people were afraid to use the steps, so he, his wife, and two of his neighbors took it upon themselves to do something about it.

“We basically started to clean this up to have a safe place for our kids to play,” Syrnick said.

During the group’s first cleanup, Syrnick said they hauled 42 pickup truck-sized loads to the dump in a single day.

Twenty-five years later, Syrnick still refers to the steps as his pet project. Water flows through unblocked gutters, weeds and vines have been replaced with shrubs and perennials, and the steps have become a popular means for joggers and dog-walkers to get to the Manayunk Towpath. 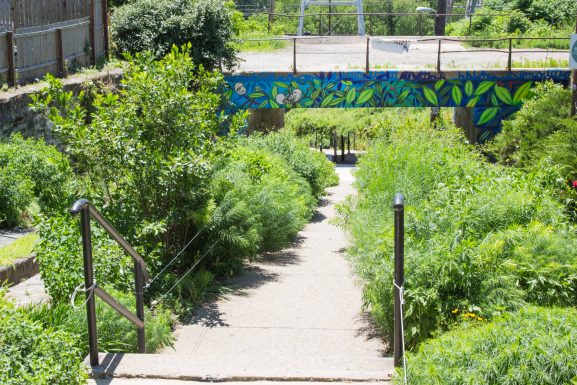 And, of course, murals and mosaics make the location an unmistakable work of art.

The idea for the artwork came in 2013 as an extension of the efforts of Kay Sykora, project director of Destination Schuylkill River, who advocated for the installation of murals along the Manayunk Towpath. 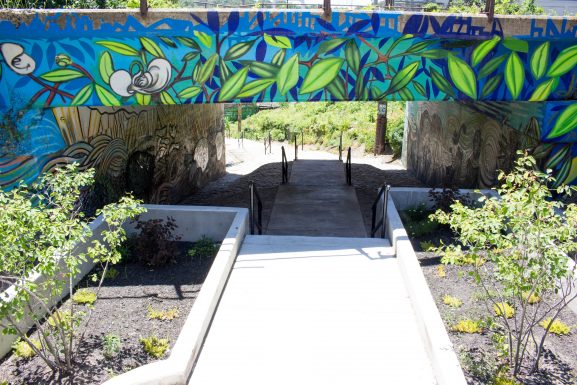 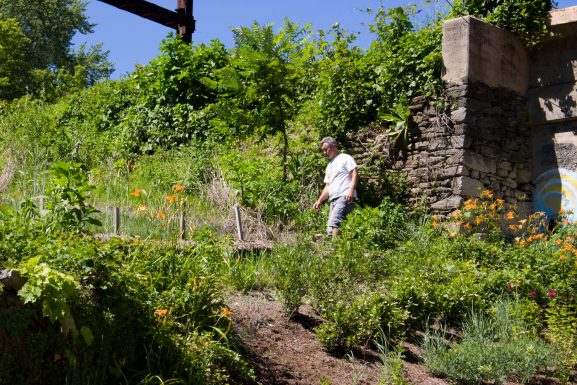 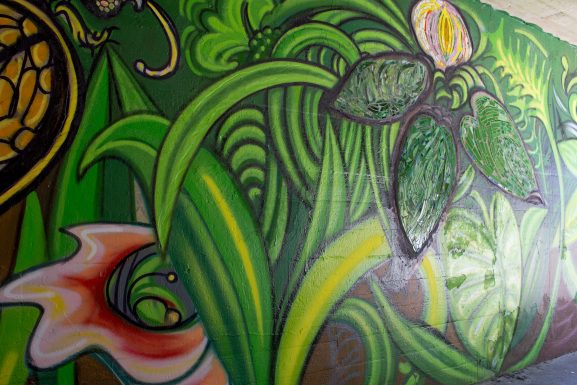 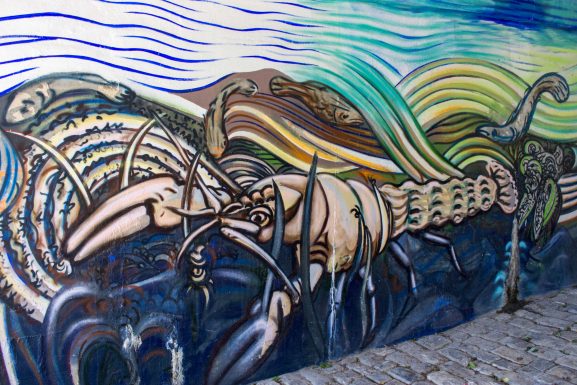 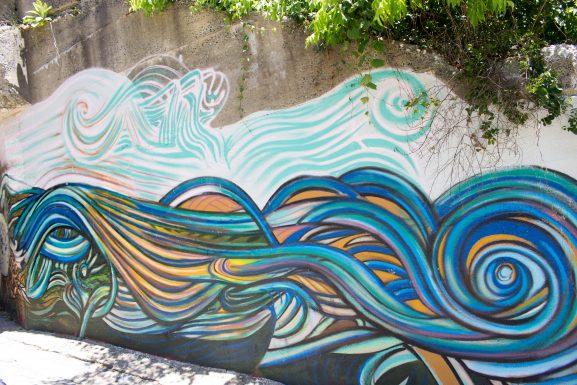 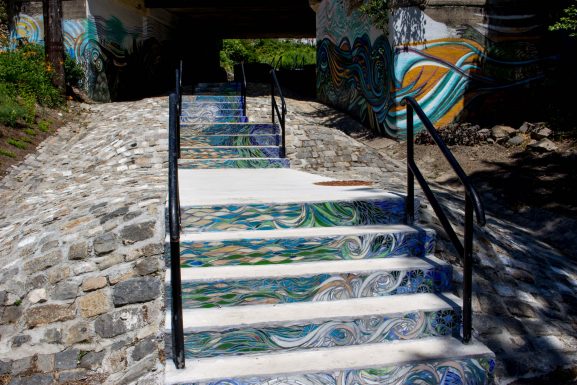 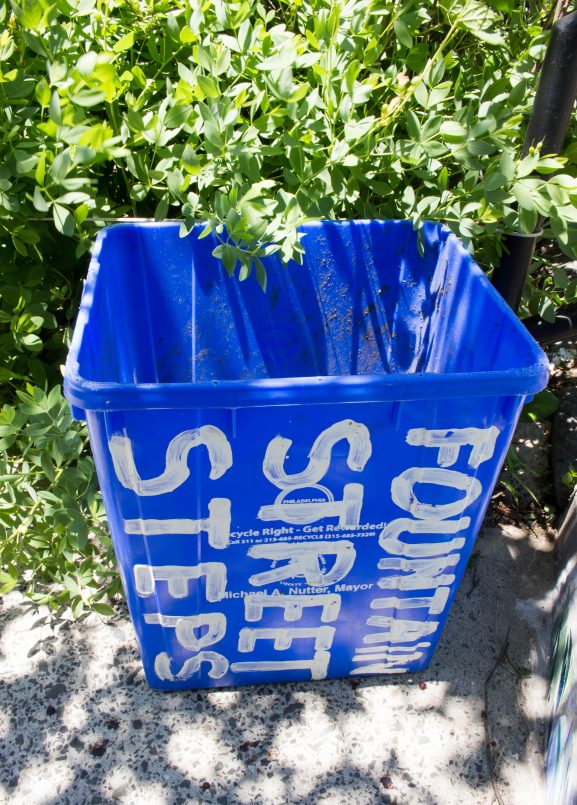 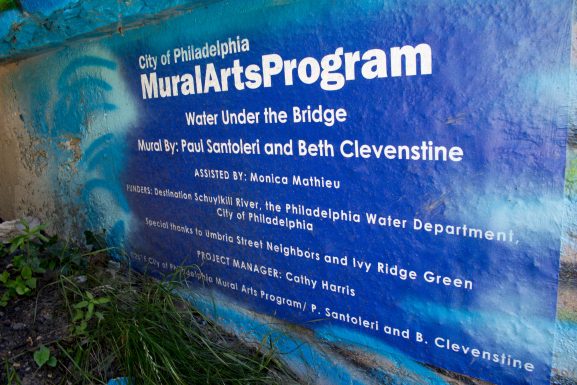 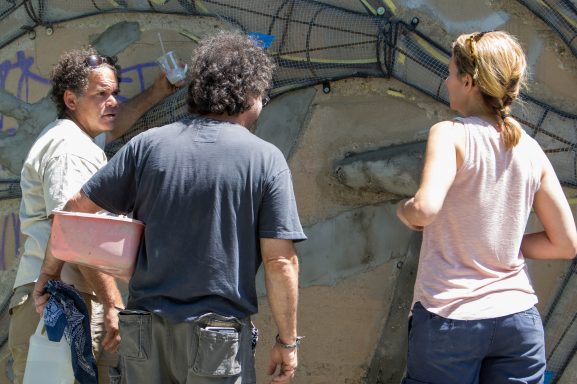 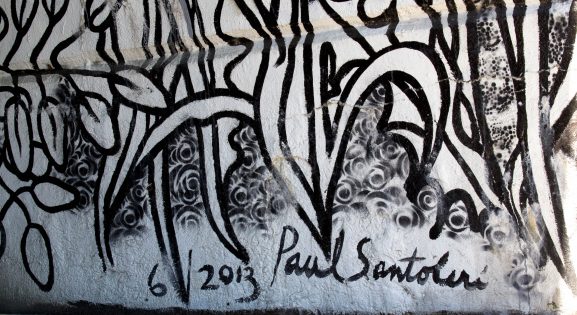 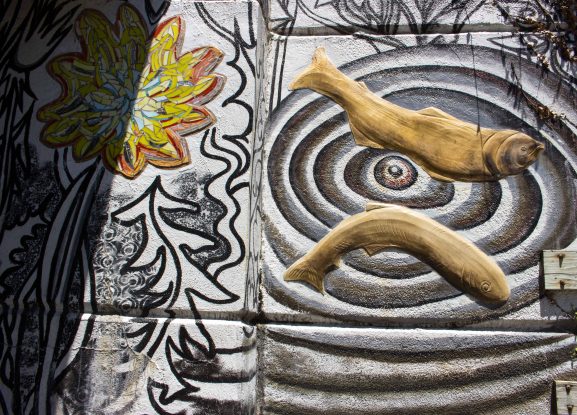 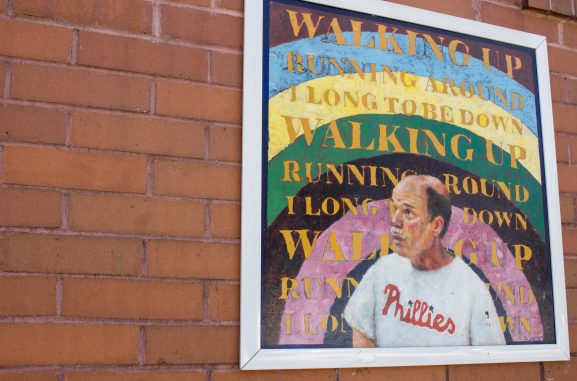 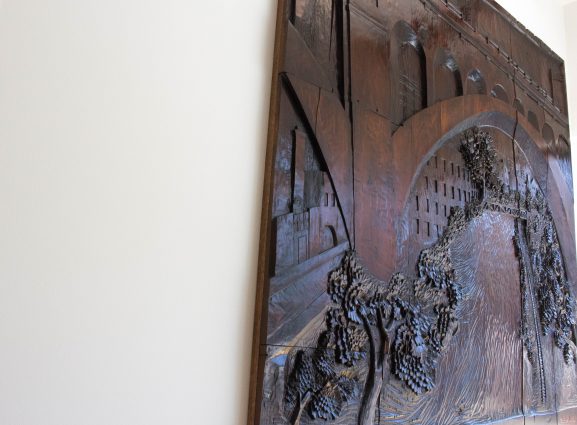 Syrnick was walking his dogs down the towpath one day when he came across muralist Paul Santoleri working on a piece under the Green Lane Bridge. Syrnick said he thought the vibrant, aquatic-themed mural was “fabulous.”

Syrnick asked Santoleri if the artist could do something similar for the Fountain Street Steps. Sykora worked to get funding for the project, and soon Santoleri was able to get started. The work was officially completed in September 2015.

“It worked out very well,” a proud Syrnick said. “The neighbors love it.”

David Stein, who has lived in the community for more than 15 years, can attest to Syrnick’s statement. After he noticed Santoleri being interviewed on the Fountain Street Steps, he stopped the artist to thank him for his contributions.

“I’ve noticed over the years that there have been more murals coming up, but this is really incredible to see,” Stein said. “I just love watching this neighborhood become more and more beautiful.”

Santoleri’s work can be found all over Philadelphia, including on South Street and near the Philadelphia Zoo, as well as places as far as Paris and Nicaragua.

For the Fountian Street Steps, Santoleri said he was inspired by the ideas of urban transformation and the revitalization of nature, stemming from the process of converting the Manayunk Canal from an industrial tool to a recreational area.

“That’s why I put things like crayfish and other animals like turtles that can naturally fight contamination and still survive,” Santoleri said. “We’re giving a bow to nature, in a way.”

Water has played an important role in Manayunk’s history, due to the neighborhood’s close relationship with the Schuylkill River. The Lenape word “Manayunk” even translates to “where we go to drink.” Running water can be heard flowing under the steps of the aptly named Fountain Street.

All these things inspired Santoleri to enlist the help of artist Beth Clevenstine to place mosaic tiling on the face of each step, creating the imagery of water cascading down the stairs.

Along with the Fountain Street Steps and under the Green Lane Bridge, Santoleri’s nature-themed murals can also be found along the towpath under the bridges at Leverington Avenue and Fountain Street, as well as on the concrete wall near Manayunk Self Storage. Here, sculptor Steve Garr is working on Santoleri’s idea to build a tree, extending across a large portion of the wall.

Santoleri said a magnolia tree in the backyard of his Northern Liberties home inspired the idea. Actual leaves from the tree will be cast in glass and included in the sculpture.

“These glass leaves (will) reflect and slow the bike traffic down to (let people) notice and take a moment of pause to recognize the nature that’s around, and the fragility of it,” Santoleri said. 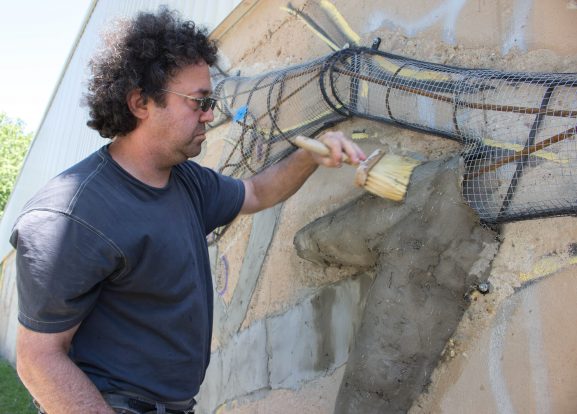 Garr said he’s excited to be a part of the project, especially because it reflects the community-driven efforts of people like Syrnick, Sykora and everyone else working to make Manayunk a better place.

“I think it’s important to have pride in where you’re living, and that’s a large part of why we’re doing what we’re doing,” Garr said.

Santoleri said he loves to see members of the neighborhood get involved to help complete the artwork. He remembers local residents volunteering to help mix concrete and cut glass for the Fountain Street Steps project.

“I feel energized by it, and that’s why I do it,” Santoleri said.

Clevenstine, who is currently in the early stages of another mosaic piece along the Manayunk Towpath, said she’s thrilled to contribute to the neighborhood’s revitalization.

“I feel like Manayunk is really starting to blossom,” Clevenstine said. “Being able to illustrate that with moments of beauty… That’s awesome.” 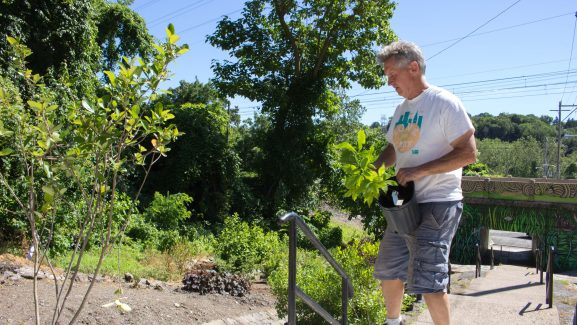 Syrnick said Ivy Ridge Green holds clean up days every other Tuesday to keep places like the Fountain Street Steps and the Manayunk Towpath in good condition. He stressed the organization is always looking for volunteers.

Along with recent art projects, Lipton discussed an annual event organized by MDC that has been a cultural staple for Manayunk for almost 30 years.

“So if you’re downtown and you’re in Philadelphia proper, Center City, you don’t think about Manayunk for the arts,” Lipton said. “However, we do have the largest outdoor juried show in the tri-state region.”

The Manayunk Arts Festival held its 27th event in June. A jury chose 300 artists out of 500 nationwide applicants to participate in the event, which runs the length of Main Street between Green Lane and Shurs Lane.

“I don’t know if you’ve seen any Arts Festival photographs of what it looks like with 40,000 people on the street at any given moment,” Lipton said. “But it doesn’t even begin to match what it feels like to be here and see this thing set up.”

Caitlin Maloney, MDC’s director of marketing and events, is a key organizer for the festival. She said she’s particularly excited about the Emerging Artist Tent, which is now in its fifth year. For a $100 fee, the tent provides a platform for about 30 local artists who may not have enough finished work or the funds to support their own booths.

“Most of them are all based in Manayunk, Roxborough, East Falls, Philadelphia in general,” Maloney said. “They get to come down and be a part of the festival. It’s been amazing.”

Maloney said she’s seen a number of artists who have been able to afford their own booths the following year because of their participation in the Emerging Artist Tent.

“I think a lot (the artists) have surprised themselves,” Maloney said. “They’ve told us that they didn’t think they would sell that much at the show.” 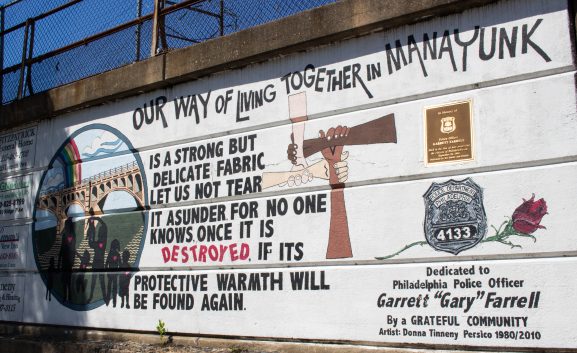 Through new projects like the murals along the Manayunk Towpath and ongoing events like the Manayunk Arts Festival, Lipton hopes the neighborhood’s reputation for the arts will continue to grow.

“Art is a really, really important factor, I think, in not only our downtown, but it’s an important factor in life,” Lipton said. “It adds beauty. It adds a story, a narrative about the district and the things that we care about.”

Philadelphia is struggling with a huge literacy deficit: roughly two-thirds of adults are considered low-literate and don’t maintain basic literacy skills, according to the Philadelphia Workforce Investment Board. In the face of this deficit, there has [continue reading…]