Freddy Castro put himself into a tight spot. After a few brush-ups with the law he decided to go the straight and narrow. But trying to land a decent paying job with a criminal record is tough. And having no driver’s license can tie you up even tighter than handcuffs.

“I was interviewing for a job. I would have been running the tool corral at [a big box store],” Castro said, adding the job paid almost $30 an hour. “But when the lady asked if I had a criminal record I just dropped my head … I knew. I told her the truth and I tried to explain and say the whole ‘I did my time’ thing. But they didn’t hire me.”

Being a handyman of sorts he took odd jobs around town and rode a bike to get to work. But the pedaling limited how far and how fast he could go.

That’s when he decided to install a motor on his bike.

“It took me like 16 hours to figure it out at first,” Castro said, while working on another bike project. “You gotta figure out where to put the [fuel] tank, the carburetor, all of that.”

After using the bike awhile he had a eureka moment.

“I thought, ‘I can’t be the only one in this situation. There’s gotta be other guys like me, who could use this bike,’” he said. “You get a DUI. You lose your license. You can’t work. That’s it.”

Or maybe that’s not it.

Now the tight spot he’s in is a one-car size storage unit in Harrowgate that he converted into a makeshift gear-head garage. The place didn’t have power so Castro rigged solar panels to the roof and wired an inverter and a battery. He ordered more two-stroke motors and heavy duty bike chains from China.

“It’s basically like a weed-wacker (motor),” Castro explained, adding that you need to put two capfuls of special oil into each tankful of gas. “You shake the bike to make sure it mixes and you’re good to go.”

He sources bikes from private sellers on sites like Craigslist and usually can land a lightly-used, solid bike to install the motor on for a good price. Occasionally he scores one for as little as $20.

“See this one?” Castro asked. “No rust. Solid. The problem? The frames are all different so I gotta customize the setup.”

“See that?” he asked, pointing out a motor installed on an extra-thick frame. “That’s one of my innovations.”

What Castro didn’t realize was how many people from different walks of life would be interested in the bikes.

“It’s a lot of downtown types,” he said.

One man uses the bike to deliver food for Caviar, an Uber Eats competitor.

Adam Bassal doesn’t just run food. He’s an amateur boxer trying to turn pro. And a real estate agent. He speaks four languages and plays the violin and the trumpet.

Bassal’s Castro-customized bike broke down. One thing he doesn’t do is fix bikes.

“He like doubled or tripled his profits,” Castro said of how much he’s guess Bassel now brings in, thanks to his motorized bike.

“It didn’t triple my profits, no,” Bassal said with a chuckle, shaking his head and grinning toward Castro. “But it did help me work more hours, so maybe I doubled how much I made in a day.”

Bassal doesn’t keep close track of his fuel cost but said it’s safe to say it’s less than $2 per $100 earned.

That wasn’t the only reason he chose to motorize though.

“All of the pedaling wore me down bit … like today,” Bassal added, smirking toward Castro again.

The give and take between the two was telling. This wasn’t Bassal’s first return visit for service.

“More than half of my customers, I never see them again,” Castro said. “The rest of them, I see maybe once more for a little adjustment or something.

Not so true for Bassel.

“But this guy,” Castro shook his head and double pumped his thumb toward Bassal, who rolled his eyes with a laugh. “Some guys are a little rough.”

Castro maintained that his bikes aren’t delicate but they aren’t exactly off-road ready. Bassal acknowledged he’s not the most genteel biker, as he’s not a natural at riding, but he’d hoped for more reliability.

“I don’t ride that fast,” he said. While the bike is theoretically capable of 30 mph he said he probably never had it above 18 mph. “I’m probably around 15 [mph] most of the time.”

Castro took the chain apart and started tinkering with the positioning on some brackets. Bassal asked him to also look at the clutch handle since he was there.

“Your hand gets tired?” Castro asked. “Are you sure you’re a boxer?”

Bassal smiled with an eye roll. 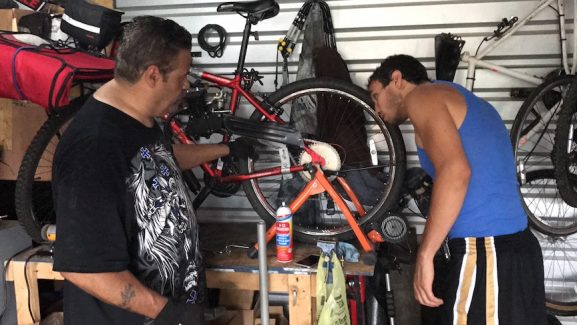 Castro made a few more tweaks to the bike and tried to assess why Bassal is having so many problems. The extra work didn’t bother him though.

His new bike project is an electric motor. But there’s a problem.

“The run time isn’t long enough,” Castro noted. To address the issue he has rigged a solar panel to the top of the battery to try to add more time to it. He’ll continue to work on that.

Castro’s not making enough money to call it a business yet but hopes one day to get there.

“I’m a glorified hobbyist,” he said. “But this combined with my handy man stuff, I make do.”

When the School District of Philadelphia removed the Morton McMichael Elementary from the list of schools that would close at the end of the year, parents of students at the school were thrilled. “I was [continue reading…]