It started in 2005 with ten kids, ten boards and ten helmets for ten weeks.

“If you told me ten years ago we’d be working for the city of Philadelphia promoting and developing skateboarding programs, I wouldn’t have believed you,” AJ Kohn, founder of Philadelphia Skateboard Academy, said.

Kohn was a product designer working the corporate sector in Philadelphia looking for an excuse to get back on the board. Every time he went out to skate, younger skaters would be asking him to teach his tricks. From there, he decided to start the Philadelphia Skateboard Academy.

That first summer started as a pilot program, called Gears for Groms (slang for young skaters), at the Southwark House in South Philadelphia to gauge interest.  The initial year was a success and through a partnership with After School Activities Partnerships (ASAP) were able to network to a few different locations.

This caught the attention of the Philadelphia Parks and Recreation. The department started Kohn with four locations, and the program exploded from there. 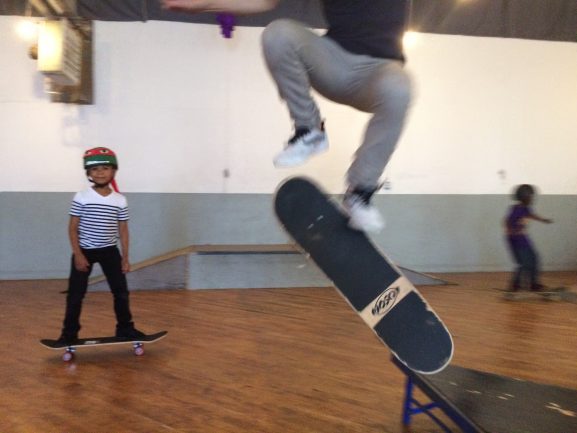 “They called me and said, ‘Good news, bad news. Good news is you’re hired again. Bad news is there are 54 locations that want you,'” Kohn said.

Kohn was given a staff of youth workers as well as another adult worker to handle the workload. They were managing programs at 40 locations. The next year, even more locations wanted in.

Kohn went from summer camps to weekend programming throughout the city. They’ve even begun to expand their reach outside of Philadelphia.

“We do Philadelphia, Abington, we do one down in Maryland and we’re actually working with the Girl Scouts this year as well,” Kohn said.

The added staff has been a help for Kohn who still skates professionally and performs assemblies as well. Christine Marie, a youth worker for the Philadelphia Skateboard Academy, spent years skating under the tutelage of Kohn and saw working for him as a perfect opportunity. 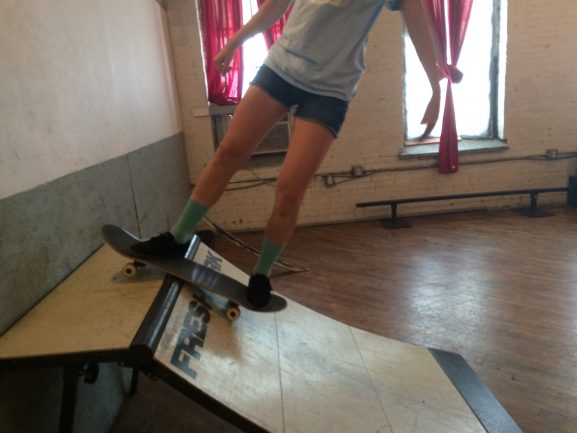 “I’m just doing what AJ did for me,” Marie said. “I’m a teacher helping the younger kids and even kids my age learn how to skate and do all that.”

After working as a roaming skateboard camp for almost ten years, Kohn needed a permanent space to continue building his mission. In Port Richmond Kohn found affordable space at The Loom and moved in, along with his ramps and rails.

Kohn offers weekend lessons at the Port Richmond location on Saturdays and Sundays throughout the year at either $10 per lesson or $50 per month.

“It’s been able to pay for itself, just based off our lessons,” Kohn said.

“We rent it out to those who want to do some type of an event,” Kohn said. “We help them run that and the donation we receive from that helps us facilitate this and give back to the community and get these kids skating, off the streets and into something positive.”

For parents involved with the Philadelphia Skateboard Academy, it’s been an opportunity they didn’t quite expect.

“For me, it’s kind of been more than I ever anticipated getting out of the program,” Angelica Ramirez, mother of 7-year-old Shamsiddin Salaam, said. “My son lives in a house full of women. Everyone around him is a woman. His dad is not in his life and sometimes you want a strong male role model or influence in their lives.”

Shamsiddin, who goes by Shams, started a year ago around his sixth birthday and could be considered one of the most talented skaters in the program, especially given his age.

“I started my sixth birthday when my Gigi bought me a skateboard,”Shamsiddin said. “My mom found Philadelphia Skateboard Academy for $10 and I went there and started learning stuff.”

“It’s great because it gave him that avenue he needed,” Ramirez said. “He will skateboard from the moment he gets up to the moment he goes to bed if you allow him.”

The positive influence Kohn has had on young skaters goes so much further than helping them get better at skateboarding.

“He even wants to change his name to SJ Kohn,” Ramirez said. “AJ goes over and beyond to make him feel a part of things. He’s really developed that bond with him.”

Kohn sees it as an opportunity to unite the kids, the families and the communities in Philadelphia. And to remove the negative stigma that skateboarding carries with it.

Kohn isn’t the only one spreading the skateboard love throughout city neighborhoods. His youth staff, former campers and park frequenters themselves, has seen the difference promoting skateboarding has made at each park in the city. 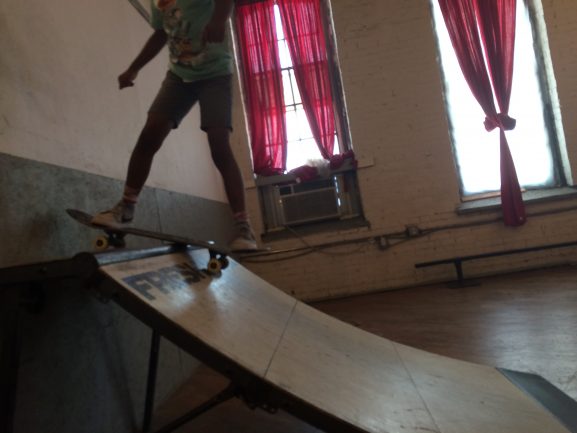 The annual Philly Cup Series plays a big part in connecting the city as well. Every spring Kohn, with the help of parks and recreation, gets together some of the best skaters of all ages in Philadelphia to compete at different parks throughout the city. This gives skaters the chance to meet new skaters, see new parks and experience different skating communities locally.

Port Richmond: For Patty McCloskey, Building a Community is No Walk in the Park

A group of teenagers are creating serious problems for the residents of Port Richmond, said Patty McCloskey. She said consuming alcohol, doing drugs and trashing the park are a few of the localized problems that can [continue reading…]

An 18 wheeler carrying crumpled, junked cars kicks up dust as it passes beneath Interstate 95 along Alleghany Avenue in Port Richmond on a bitter cold day in November. By going beneath the bridge which [continue reading…]

Lauren Hallden from Port Richmond is using a website she created to connect with users in a unique way. Problem Bodies is a site that randomly generates things that are “wrong” with how you look. [continue reading…]