A large congregation of music students and proud parents gathered last week in the upstairs foyer of Port Richmond’s Portside Arts Center for the first public performance for many of the young participants. Tiny hands bowed a violin rendition of “Twinkle Twinkle Little Star” and a vocally gifted youngster belted out a cover of “When I’m Gone” from the movie “Pitch Perfect.”

Regardless of their instrument of choice, all of the music students shared a single commonality. Without the Portside Arts Center, their opportunity to participate in the arts would dwindle substantially.

A simple observation was all founding director Kim Creighton needed to kick around the idea of starting the art center. After moving to Port Richmond in 1989, she noticed that there was nothing for any of the children to do. To fight delinquency,  Creighton wanted to offer local youth the opportunity to participate in the arts.

The next step for Creighton was to gauge interest. After sending out 2,000 surveys asking local residents if they would be interested in having an art center, the responses Creighton received overwhelmingly positive. According to Creighton, roughly 1,800 locals responded with a resounding yes. 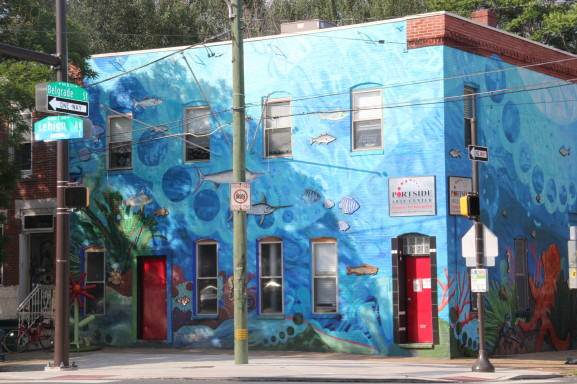 The doors of the Portside Art Center opened to offer their first class on January 21, 2008. Their HVAC heating system had arrived, but the copper necessary to get it to work had not. It simply wasn’t in the budget. So Portside students did their work in winter coats.

“That was the point where I said, ‘This is my place,’” said Creighton. “I was like, “Wow, these people really appreciate this.’”

Today, the center offers a variety of classes for children, teens and adults. In addition to the music program, the Portside Arts Center runs classes that range from photography to glasswork, ballet to robotics and acting. They offer a class called “Girl Power” that explains the significance of female artists to young students and then has them create art in their style.

Perched on the corner of Belgrade Street and Lehigh Avenue, the center is somewhat of an outlier. The neighborhood is void of arcades, bowling alleys and movie theaters. According to Creighton, the only thing children in the area have to do is sports. And the public schools are doing little to combat the issue.

“When they said last year that they were going to be removing the funding from the public schools for arts education, we were really surprised,” said Creighton. “We had thought that they removed it many years ago.”

“There used to be art and music in all of our schools growing up,” added Portside arts and crafts teacher Jean Murray.

In addition to her duties as the center’s assistant director, four year Portside employee Jenna Wilchinsky runs Art ProjeX, a multimedia class for teens that aims to build the portfolio of students looking to gain admittance into art high schools. For Wilchinsky, it’s a labor of love.

“Sometimes there are only three girls but they really want to do it,” said Wilchinsky. “So I say, if I forego getting paid, I can at least run the class with the little bit that we get.”

The Portside Arts center is rarely stagnant. Remodeling often occurs and the hammering of nails is a constant presence. But just as the building is rarely static, the classes offered rotate as well. The upholstery class, which now accounts for 20 percent of the Portside Art Center’s revenue, started at the behest of a community member who requested the class.

The center largely sustains on donations and the fees they charge for classes. Portside is a non-profit organization, so donors receive tax write-offs. Politicians, including Senator Christine Tartaglione have recognized the center and have donated.

According to Creighton, the tireless work of Portside employees is what keeps the doors open.

Assistant director Jenna Wilchinsky stepped up to the plate when the center’s website crashed in 2012.

“Our website got hacked two years ago,” said Creighton. “Jenna just went, ‘Don’t worry Kim!’ and got on Weebly and made the website from scratch. We saved ourselves $5000 right there. And we had another grant writer volunteer and mentor Jenna and now she does all of our grant writing and all of our programming. She’s my right arm. She’s phenomenal.”

“That’s the wonderful thing about art,” said Murray. “Whether somebody just said something to them that bothered them or hurt them, or whether they’re being hurt at home, they don’t have to say it sometimes. They can draw it and you can see it. Other times, you really can’t. But at least they know they have somebody they can talk to, which is an awesome thing because they may not have that at home.”

-Text, images and videos by Jacqueline Nelms and David Zisser.

The Legendary Dobbs used its popularity in the Philadelphia music scene for a worthwhile cause. The renowned live music venue on South Street hosted The Truce Initiative’s inaugural benefit. Founded by Chuck Ahrens, the eight-month-old, [Read More]

Ten years ago, Michelle Angela Ortiz hoped to be where she is today – a successful visual artist, skilled muralist and community arts educator. For more than 18 years, Ortiz has been using art as [Read More]

A mixture of art, history and parks makes Northwest Philly a diverse area for community activities and events. Check out the community treasures of the Northwest. Woodmere Art Museum This 19th-century Victorian mansion sits on six [Read More]