Kristen Schier wears a lot hats. She currently works as the improv producer at Philly Improv Theatre, the artistic director for The N Crowd, as a senior lecturer at The University of the Arts and as a guest lecturer at Temple University.

What is your background in improv?

I was always interested in comedy, even as a kid my parents took me to theatre school because it was pretty apparent that that’s what I wanted to do. There were no secrets there. So, I got training at The University of the Arts in theatre. My senior year I was in (acting) studio with someone who was involved in ComedySportz, and they focused on improvisation and I loved it. Upon graduating I got involved in the very brand new improv scene here in Philly. I followed up my training elsewhere, so I’ve taken classes at the Magnet Theatre in New York City, I’ve taken classes at Second City in Chicago, at the Annoyance in Chicago and also a lot of clown training with Pig Iron Theatre Company.

Where are you performing right now?

The majority of my performances are at the Philly Improv Theatre. I also perform with a short-form ensemble called The N Crowd, who performs at PHIT (Philly Improv Theatre), as a separate thing. I’m the improv producer there at PHIT so I’m on the artistic staff, but internally I perform with a group called The Future, and I perform on a Saturday team called Dutch, which will be ending its run fairly soon, but hopefully I’ll get involved with another Saturday team somewhere. 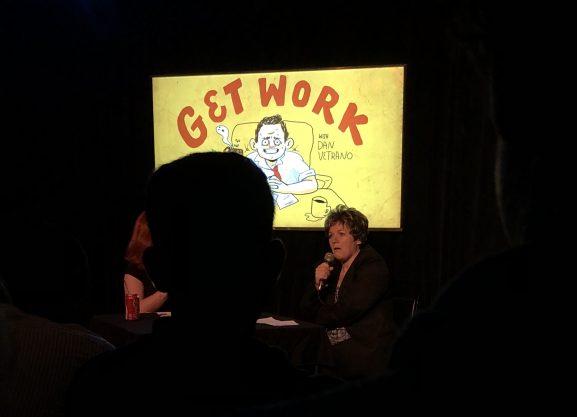 Could you talk about your show Get Work?

Get Work is an idea of Dan Vetrano’s, he’s the creator of the show. I’ve known Dan for a long time, I used to go to shows that he hosted at Tabu in Center City a while back. He tapped me as someone he knows who does improv and comedy in the city, to be a part of the show, which I was very excited to do.

Will the show be performed again? And will you be performing with the same actors?

I think it was just this one night although after he cycles through a few more shows, he might revisit people who he’s had as guests.

Each of the actors were given fake resumes at the top of the show, had to create a character based on the resume, then sit down with a professional and as the character they created, try and get the job they were applying for. What was the most difficult aspect of the resume you were given?

The resume was fairly explicit. I think the most difficult thing was finding life in the gift of being a game show host that existed after looking at the resume. So, it was basically like the cat was already out of the bag, and I had to keep the cat in play throughout the rest of the performance. The interview was sort of a different thing because I felt like the audience already knew who I was and not knowing the interviewer was fantastic and I don’t suggest it being played any other way.

So, those were real people interviewing for these jobs – those jobs were real?

That’s right- so they were asked to think about what questions would you honestly ask a real candidate for a position, and to go ahead and ask those questions. Its just a fun idea for a show. I think they felt weirdly uncomfortable because how were you supposed to hire any of these people.

How do you create such a bold character, while facing the reality that on any given night the audience may react negatively? And how do you keep rolling when that happens?

That’s the exciting thing about this and the fun thing about the show. You have to commit up front and do something that’s fun and exciting for you, and just trust that your commitment to your choice is established. It’s always your commitment to the choice that the audience responds to and not necessarily the choice of self. Your commitment will help other people buy in and have fun, which will result in other people having fun. It’s like serving a plate of food with a smile on your face, versus questioning what you’re serving. You’ve just got to love it up top, and love it hard.

What’s the worst situation you’ve been in when the audience hasn’t responded?

Frankly, it happens often. I find that those moments happen most often when I’m not doing what I promised the audience I would do, which is improvise. And sometimes I’ll find myself performing a character that is just stale, because it’s a go-to of mine. One time. Most of the time, the people I’m performing with are so helpful, that there’s help in their eyes. There’s always something they’re giving you to do. If you can take it off yourself for a moment, listen, and respond honestly, then you’re able to do the next simple thing. I think people freeze as a result of being overwhelmed with how something might go. I’ll say this, one time I was performing with a drunk student. I was in a show called Dean’s List, and students can put their cards in, and they get to play with an instructor at the theatre. It came late to our attention that the student was drunk. There was no help in their eyes. 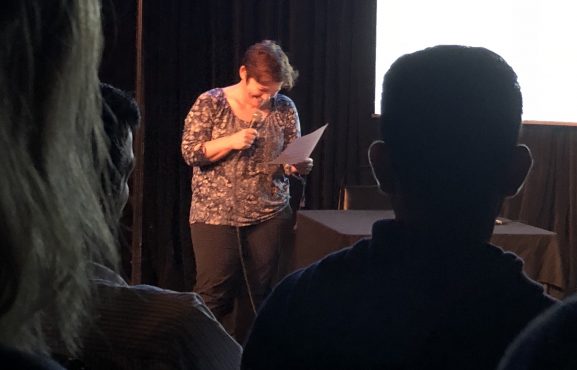 As a professor teaching both acting for non-majors at UArts, and at Temple, are there approaches you take to teaching the different groups of students?

The approaches are very different. Teaching acting for non-majors, we’re getting into a group of students interested in investigating the art of acting on a pretty introductory level. The class is to mostly give people a foundation in the approach. I find my success as a teacher, in finding what skills are transferrable to what your main focus is. Which is similar to teaching training doctors (at Temple), but with the doctors I have to get a buy-in for the value of the class. Many of them do not approach the class as something that’s going to be helpful. With the art students, I often don’t need that buy-in. I just need to figure out what unique skills they bring to the table.

What kinds of curriculums do you establish for the classes?

The first focus is on building trust in ensemble, because the things that we’re going to do later in the course require everybody to feel safe, and feeling like they can be their authentic selves in the classroom. Following that, we give approaches to text. First the students work on a monologue and then we work on transferring those approaches to a scene. The idea of building ensemble is more about working together as a group and also to create pieces, so that people experience working together. Theatre is highly collaborative and that piece of the puzzle is very important.

What do you hope to bring out in new talent?

Working with people who are improvising for the first time, the most important thing is to be a bigger cheerleader for who they are and their own ideas. Improv has values in so many ways. Sometimes someone will take a class and performing isn’t their projected outcome. For new people, how do I listen? How do I support somebody else? And how do I love my own ideas as much as I love theirs? We treat the class like a team to begin with. A lot of the exercises are just about listening and responding. Trying to deemphasize “funny,” and emphasize “fun.” There’s a great improv teacher named Liz Allen, she wrote a book called “Improvising Better,” and she said “If you want to be funny, be real. If you want to be real, be vulnerable.” If you’re too afraid to be seen, you’re not inviting the audience to participate, and they can smell a rat. You’ve got to put yourself out there and when you take that risk, the reward will be waiting for you. The audience will always meet you, especially if they feel spoken up for.

Do you gain anything from your students?

It’s been my honor and my joy to teach. I know its cliché but I’m always learning every time I teach. And I often find myself saying “I owe you a quarter,” because I’m going to steal their bit – because when you steal their bit, you’re supposed to give them a quarter. And a teacher who knows everything is boring. I find myself just wanting to get out of the way when they’re not afraid.

Do you have any advice for beginner comics?

Yeah, dive in. Start to get to know the community. Find a style of comedy that you like, to develop your taste and ease off on criticizing yourself, because your style and taste will take a while to find itself. That’s some good advice that Ira Glass gave. In anything you’re learning for the first time, you’re unconsciously incompetent. Then comes the painful part where you’re consciously incompetent, you start to be able to judge your work a bit accurately, and then comes the dangerous place where you’re consciously competent and that’s a place where you can stop growing. That’s when you reach the nirvana of learning because you have the tools and it takes real, painful investigation to reach that stage. If you cannot fail, you cannot grow. Fail hard, fail big.

Do you have a job right now that is not related to theatre?

No, I do not. But it’s a lot of work because I also have administrative duties. What I love is my work, but I love my work.

Is there anything immediately in your future that you’re excited about?

Actually, yeah, later this week I’ll be going out to the Omaha Improv Festival. I’ll be performing in a duo called World Champions. A week or two after that I’ll be heading up to Toronto for Bad Dog’s Combustion Festival, where I’ll be a guest performer. Bad Dog is just incredible.

Does Omaha have a big comedy scene?

I don’t know! And I am not sure how they’ve attracted this huge crowd, but I’m excited. 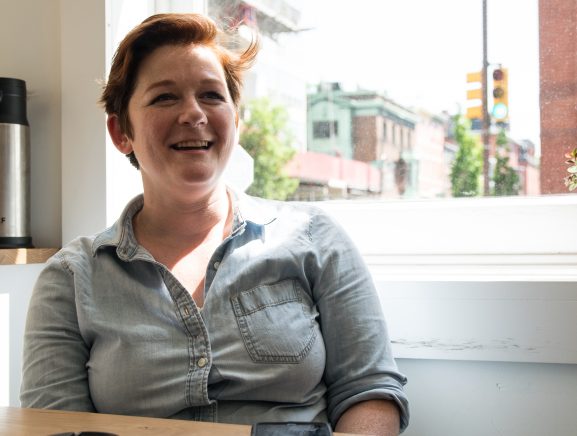 The Center for Emerging Visual Artists (CFEVA) is holding its annual Philadelphia Open Studios Tour (POST) throughout October. For the first two weeks of the month, visitors can get a behind-the-scenes look at the work […]

More than $1.5 million was given out to local arts groups earlier this year. The Philadelphia Cultural Fund distributes grants yearly to help keep community organizations providing services to residents. Awards range from a couple […]

Santa isn’t the only thing that’s big this holiday season. Wired 96.5, an FM radio station in the Philadelphia market, is preparing for its 2nd annual Big Philly Show Bike Drive. Wired 96.5 has frequently […]