A creator, teacher and a comedian, Justin Jain is one of the founding members of The Berserker Residents, a professor at the University of the Arts, and a well-known face in Philadelphia’s theatre community.

His career started when he was 4 years old as a ballet dancer. That medium of art carried him through his teen years. That was when he started doing musical theatre, and eventually college, where it was his major for one day.

After attending his first classes Jain realized musical theater was not his forte, and switched to a major in acting.

“I just found that a lot richer, because that first day, I was not nearly of the caliber of the other singers, even though I was confident as a dancer,” Jain said.

It was then in acting that Jain found his love for comedy, and would later earn his bachelor of fine arts in acting from the University of the Arts. While their musical theatre curriculum requires upwards of 10 single credit classes a semester, the acting major allows for far more flexibility.

“It was around the college years that I started to realize that I had an inkling for comedic work,” Jain said. “Particularly because, well two things sort of happened. In 2003, and 2004 I was realizing that when I graduated there weren’t going to be a lot of professional opportunities for me.”

Jain graduated into a newly blossoming comedy community in Philadelphia knowing that he would have to create his own opportunities. Jain knew from the get-go that despite his talent in some areas, his goals wouldn’t come to fruition in the ways he wished by performing in a traveling production of Miss Saigon. 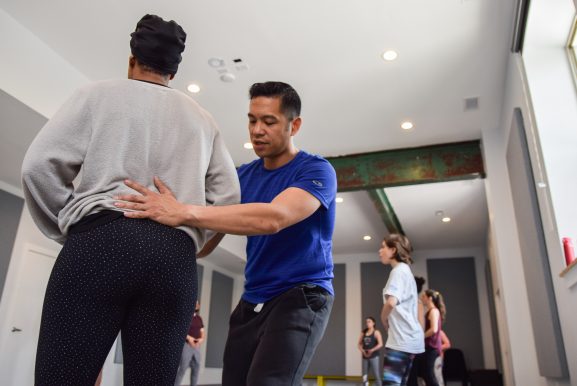 “I learned quickly that I was going to have to make my own stuff,” Jain said.

Like many of his successes, Jain attributes them to his family. He was brought up in a household that was always filled with laughter.

“Our household always had so much laughter in it,” Jain said. “I think that’s where a lot of it comes from. I think it has something to do with being Filipino. All of the Filipinos I know are really joyous people.”

His parents are also responsible for his creative upbringing in a way, when they recognized at his young age that dance was something he was good enough at that it was worth it for him to pursue. That same attitude carried him through his college years, when Jain knew, that after choosing such a specific path, he had to find substantial work in order to remind his parents that he was on the path he was meant to be on.

“My dad is very much a trickster, and a prankster,” Jain said. “ He’s also a doctor, so I think that’s very much his way of making connection with his patients, so it’s in my blood. I was really drawn to be funny, and how to make people laugh, and talk about things that were really important to me and so that’s where it really started.” 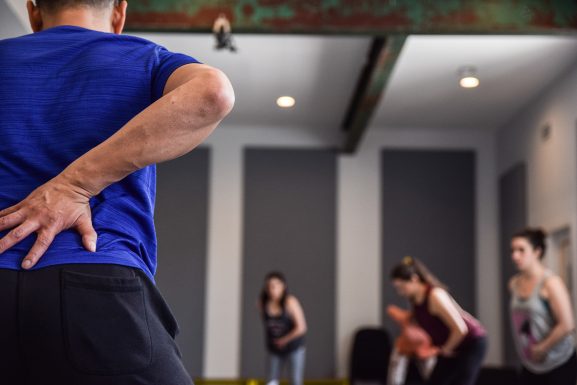 In 2004-2005, Jain met Brad K. Wrenn while working on a show together. The two later would help co-found the Berserker Residents with a third creator, David Johnson.

“We were making each other laugh all the time.” Jain said about meeting Wrenn. “Stupid jokes, references, or talking about funny shows, we didn’t know at the time that we’d be long-term collaborators.”

In 2006, The Berserkers performed their first show, The Jersey Devil. A foreboding tale about an ancient monster of sorts that lives in the Jersey Pine Barrens.

Since then they’ve defined themselves as hilarious creators with other popular performances in The Giant Squid, The Annihilation Point, and The Post Show which premiered at the Fringe Arts Festival in 2013 and then later performed at Edinburgh Fringe in 2014.

In addition to his staying in Philadelphia and honing the craft, it didn’t take Jain long to return to his alma mater in a fashion. In 2015 he co-directed a project called The Untitled School Project, as part of the University’s Incubator Series.

Rachel Berkman, a cast member and student of The Untitled School Project, grew up loving comedy and bigger personalities. She recalls the student-to-teacher collaboration with the Berserkers and how immersed they were in the teaching process and production of the shows.

“It was a great process,” Berkman said. “They were our directors but also they were our collaborators. It didn’t feel like a show, but more like creating this piece of art together.”

Berkman noted that a large part of the learning curve was with the clowning technique, Bouffon. The anti-clown persona that instead of playing jokes on himself, the clown turns the jokes on the audience.

“Bouffon is a counter-mask of the clown,” Wrenn said. “As the clown is based in joy and childlike wonder, Bouffon is the character that says, ‘I’ve seen it all, and I’m coming here to wake you up, even if it hurts you physically.’”

Jain, along with Bradley Wrenn, Chris Johnson, and about ten students from The University of the Arts’ Ira Brind School, collaborated to create a stepping stone for The Berserkers. In 2016 they transformed the piece they’d performed into a more structured show, and performed it in Philadelphia’s Fringe Festival.

After such significant success with the show, then director of the Ira Brind School, asked Jain, Wrenn and Johnson to return to the college, except this time on its faculty. They created a class to help cultivate students comedic ability regarding stand up, writing, both short and long form sketch writing, and how to do so from themselves.

Wrenn regards this process as honest, and the only way to teach someone how to be funny. For their final project students were assigned to write a five minute long stand-up set, and perform it in front of a public audience in Philadelphia.

“It’s about yourself,” Wrenn said. “I can’t tell you how to write a joke about yourself, because I actually feel like in doing that, it’s dishonest, and the joke may not work on you. Comedy is about featuring yourself… you have to create a jungle gym for someone to climb on.”

The Berserkers are preparing to travel to Paris in the next few weeks to begin training on the teachings of the late master mime, Jacques Lecoq, and world-renowned Bouffon clown, Phillipe Gaulier. The training will teach the traditions of miming and Gaulier’s ideology of finding joy and pleasure in performing on stage.

Afterward, they plan to travel to Edinburgh Fringe Festival solely to watch shows and begin to formulate ideas for their upcoming project, a children’s comedy show. Although, still in its early stages the Berserkers want to take that joy and wonder that children elicit and bring that to their performances.

“For instance, if you watch children playing tag,” Wrenn said. “It’s incredibly watchable purely because it’s based on joy and fun.”

For Justin Jain, he continues to navigate through the Philadelphia theatre and comedy community. While in most cities like New York and Los Angeles, the market for professional acting, teaching, and creating can be suffocating and unsustainable. In Philadelphia, Jain has found a market that he is able to flourish and have time to create on his own, as a professional actor, teacher and creative.

“Here in Philadelphia I have found a home that has fostered my artistic voice,” Jain said. “As well as my financial stability.”

Anthony Martinez-Briggs, 25, is a teaching artist at the Philadelphia Young Playwrights. He is a co-founder of the grassroots organization “I Love Living,” which stems from the local hip-hop band Ill Doots. He also teaches [continue reading…]

Arts and Entertainment: Five Places You Need To Know

There’s a bounty of things to do in Philadelphia for entertainment. Often, some of the best spots are kept under the radar of non-Philadelphians or people who are unfamiliar with what lies beyond their neighborhood [continue reading…]

https://vimeo.com/38383836] Young aspiring actors gather together at the Francis Cope House, located at One Awbury Road, bringing the words of Shakespeare to life. Suddenly, a room that only housed a fireplace and an oriental rug, [continue reading…]