Residents of the 7000 block of Cresheim Road held a rally Saturday morning, Oct. 13, to protest the proposed construction of an apartment building on their block. Speakers, including representatives from West Mt. Airy Neighbors and the Philadelphia City Council, expressed their commitment to swaying Tester Construction Group away from the project. 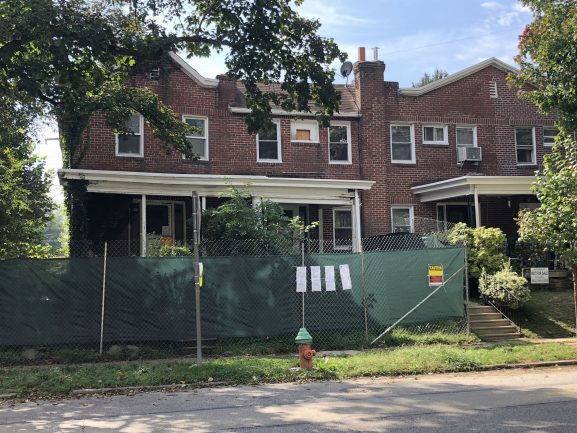 Tester bought 7000 and 7002 Cresheim Road (pictured above) in May. Neighbors believed the homes were to be restored and resold. However, after Tester received permits to build an apartment complex, residents learned the block had been zoned for multi-family units since the 1980s. Block residents have been in conflict with Tester and petitioning the Philadelphia Zoning Board to rezone the block as single-family since.

At the end of the rally, Joshua Kleiman, a resident who had been involved with talks with the developer, indicated that a resolution may come soon.

“We feel victorious,” District Eight Councilwoman Cindy Bass said. “Like I said, I’m going to claim it as a victory because I think that [the developer] recognizes what an uphill battle all of this is and, also, there are other things that could be done, that we want to work with them in terms of development.”

Tester Construction Group did not respond to requests for comment about slowing or changing their plans.

Ginny Barnwell, a resident of the contested block (pictured below, far right, next to block neighbors Nona Wright and Celeste Zappala), was one of the first to bring attention to the developer’s plans. 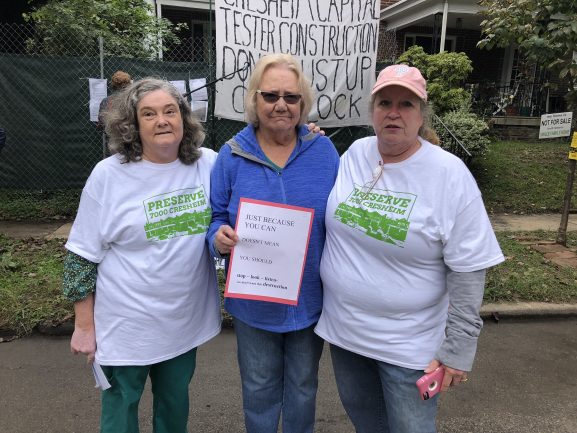 “It’s weird that this side only is multi-family,” Barnwell said. “The other side is single-family.”

Block residents Joshua Kleiman, Nona Wright (pictured below), Lillian Scott and her granddaughter Nafisa Watson all spoke about the importance of not breaking up the block. West Mt. Airy Neighbors president Heather Pierce, local architect Tim McDonald and Councilwoman Bass also spoke to the gathered crowd of residents from all over Mt. Airy, many of whom brought their children and pets in support.

“It’s a lot of aggravation to build something that nobody wants,” McDonald said. 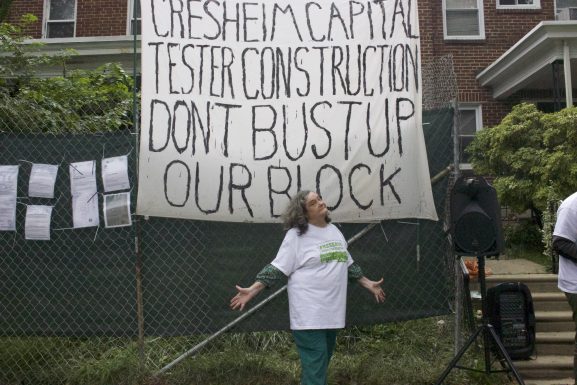 Construction was set to begin on Oct. 3, but was halted when local residents and Bass confronted the demolition crew that morning. Bass helped the neighbors file for a emergency restraining order on construction, which was approved the next day.

“We didn’t believe that the [developer] did not have everything that they needed,” Bass said. “They did not have an agreement with the neighbor, Ms. Scott, and they could not do this demolition, let alone the rebuilding, without damaging the neighboring property.”

Damage has been a concern raised by many residents over the past several months, and they don’t believe their fears are unfounded. Last week, a retaining wall outside 7006 Cresheim Road was damaged when trucks came through to install a fence around the two properties, Wright said.

Many were also concerned a new complex would affect parking and the community aspect of the block. 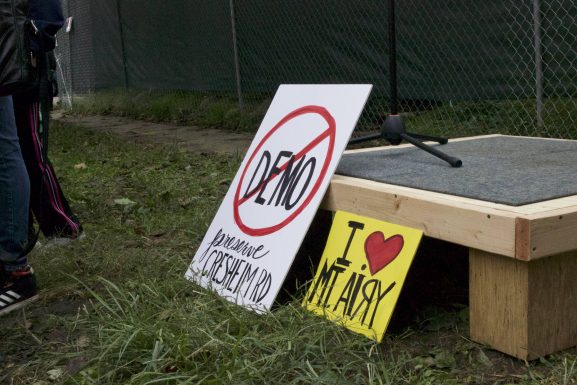 “I think building an apartment building with people who reside here for only three months, or maybe six months, would not be good for the neighborhood,” said Linda Jarlett, Scott’s daughter who lives two blocks away.

Since May, supporters and neighbors have attended multiple meetings with the zoning board, Licenses and Inspections Department, and the development company. Initially, they were able to stop construction after a hearing with Licenses and Inspections and pointing out flaws in the construction plan, but a second hearing ruled in favor of Tester Construction Group and allowed construction to continue. Residents said there are still significant issues unaccounted for in the plans as they stand now, such as the slope of the land and height of the planned building.

Though the rally ended on a high note Saturday, supporters are holding their celebrations until they are more certain about the future of the project.

-Text and photos by Morgan Slutzky and Michaela Althouse

Shannon Lindsay lives in Island Green Estates, a subdivision off Red Lion Road in Bustleton that borders the now closed Island Green Country Club. When she and her husband purchased their home, they expected a [continue reading…]

Operation Silence for Life  is dedicated to getting its mission out to the public. Standing on Broad Street and Cecil B. Moore Avenue, members of the Cardinal Newman Center on Temple’s main campus  wore red [continue reading…]

Bustleton: Zoning Code vs. the Northeast