Kitty Dior said the turning point for her traffic activism occurred outside of her Mount Airy home on Lincoln Drive and Hortler Street after a horrific accident in May 2007.

Dior, a consultant for shops in Center City Philadelphia’s “Jeweler’s Row” by Eighth and Chestnut streets, was just coming in from the movies and heard a loud crash from inside her house. She instinctively dialed 911 and then preceded check out the crash.

“I came to the window and didn’t see anything,” Dior said. “I walked down to the pavement outside and saw skid marks and noticed that my neighbor’s bushes had been clipped.”

She said that the embankment caused the driver of a black SUV to go airborne, knock down the traffic light and crash into the front of her neighbor Sharon Boyd’s house.

“Both the driver and the passengers were drunk and luckily sustained only minor injuries,” Dior said.

After that moment, Dior snapped photograph after photograph on her Nikon D-80 digital single-lens reflex camera of every car crash that occurred near her home on Lincoln drive.

And it wasn’t hard to find another crash.

“On average, there are about three accidents per week in less than a one-mile radius of the residential area here,” Dior said. “It’s just disturbing.”

It is out of the concern for the safety of her neighbors and the drivers that Dior became a traffic activist. And to raise public awareness of the driving hazards along Lincoln Drive and other major roadways in the city, Dior is putting together a giant photo collage of her work by the end of the year. 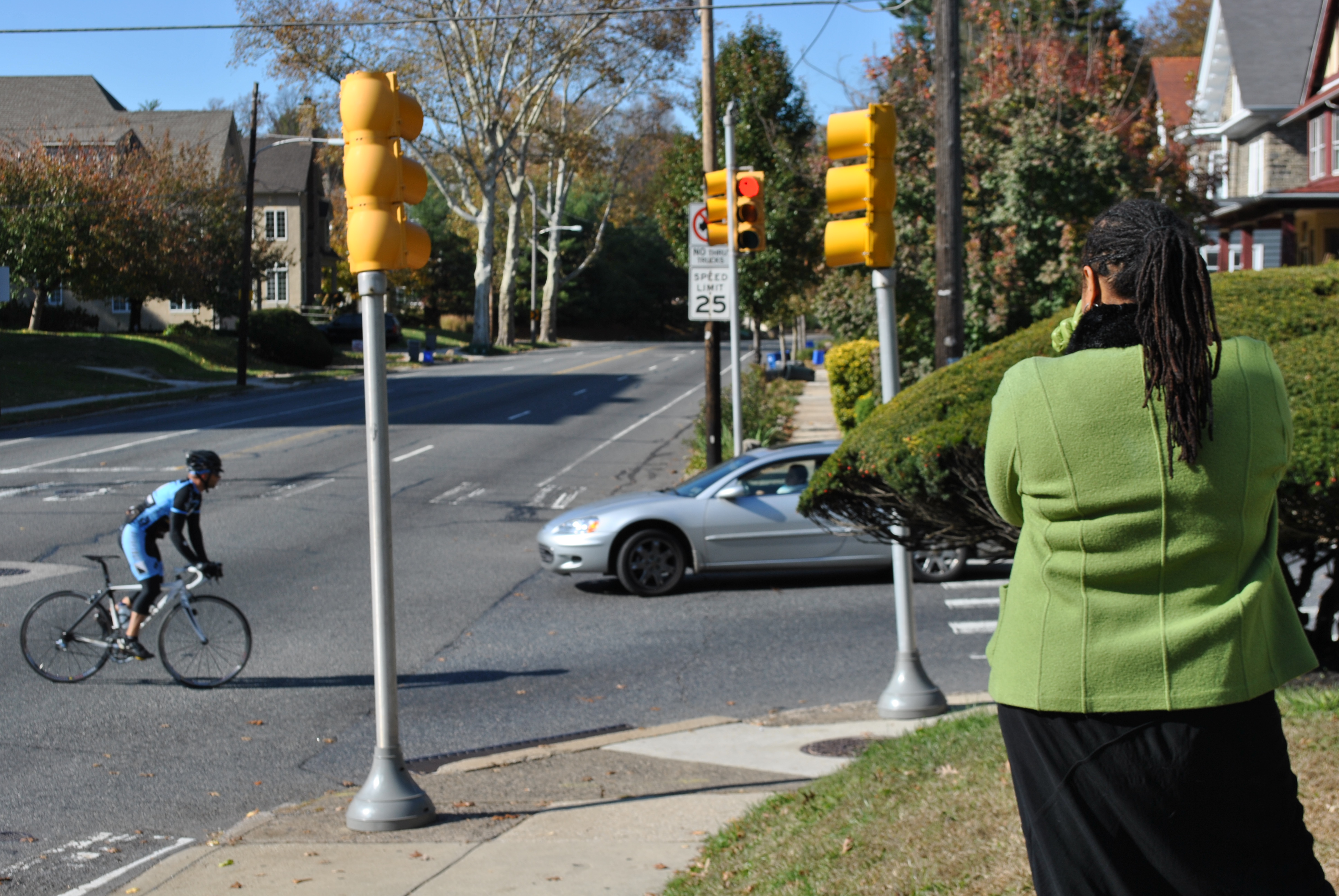 Dior met other frustrated neighbors, such as Angela Clemente, who wanted to take action in regard to the traffic and crash problems soon after the accident at the Boyds’ home.

“Partially out of frustration with excessive speeding in my neighborhood and partially out of curiosity with the concept of traffic calming, my attention was captured not only as a citizen but as a doctoral student studying human and organization aystems,” Clemente said in e-mail.

In the middle of 2007, Clemente and several others received invitations from Dior to attend the West Mount Airy Neighborhood Quality of Life Meeting about the Boyds’ incident on Lincoln Drive. It was at this meeting that concerned residents like Clemente, Steven Wade, Dior and others formed the Northwest Traffic Calming Committee (NTCC) to research the issue of spending in the Mount Airy community and seek out possible solutions for the crashes in their neighborhood.

“We were shocked by the number of crashes [we found during our research],” Clemente said. “The use of the term crash is important because it highlights the reality that the large majority of traffic injuries are not acts of fate or accidents, but in fact are predictable and preventable.”

The NTCC said these accidents are preventable through traffic calming, which are methods that slow or reduce motor vehicle traffic to improve safety for bicyclists, pedestrians and residents.

Roundabouts, for example, slow traffic by allowing the cars to move in a circular motion, requiring drivers to yield to one another and thereby slow traffic.

NTCC member Wade and his family used to live in Berkeley, Calif., which he said implemented traffic calming strategies perfectly.

“A lot of streets have barriers or cement circles and you have to slow down to go around them,” he said. “It keeps people from rushing, especially since a lot of traffic is due to the [University of California campus]. This means that drivers have to go down main avenues.”

When he first moved to Mount Airy in the spring of 2008, he noticed it was much more residential than other Philadelphia neighborhoods.

“I live on Lincoln Drive and see people speeding on by, going past the speed limit,” he said.

Last year, the NTCC put together a packet on traffic calming and the research it found regarding crashes.

Through a compilation of Philadelphia Police Department reports, the group found that between May 2008 and April 2009, 1,740 crashes happened on five streets in the city. Lincoln Drive had 118 crashes; Henry and Stenton avenues had 280 and 312 crashes respectively.

Germantown Avenue had 425 in that time period, and Roosevelt Boulevard had the highest number of crashes–605 between May 2008 and April 2009.

“The city considers Lincoln Drive an arterial road,” Dior said. “These are roads that usually have major veins of traffic flow that get cars from here to there.”

Wade said the problem in implementing traffic calming is process.

“Basically, you have to get someone to do a preliminary study, and once that study is done and you get the go-ahead, you have to get a grant to get a bigger, more formal study done, which gets presented to the state and PennDOT,” he said.

In a letter and petition from the NTCC to its elected officials, which included members of City Council and Rep. Donna Reed Miller, the group appealed on behalf of traffic calming.

“The major issue is that speed limits and stop sign and traffic light regulations are not enforced in any meaningful way. As a result, the situation for moderate drivers and pedestrians has grown increasingly dangerous. We need you to look into this issue and to support our efforts to restore a moderate level of vehicular behavior and to restore our community to its residents,” the letter and petition read.

“The mentality is, ‘How can we get as many cars to the expressway as possible?’” he said. “No one drives 25 miles per hour.”

Reed-Miller’s office did not reply back by the time this article was published.

Since NTCC did not make much headway with this, Dior hopes to appeal to the public through the awareness via her photo exhibit.

“My intention for the exhibit is to do one very large photo collage poster, and then do a series of smaller photos where people can see close-up what they are,” Dior said.

There has been an ongoing problem in Bridesburg with traffic for as long as people can remember, especially with trucks and buses because of the depots on Orthodox Street. In recent years, it has gotten [Read More]

In Philadelphia, like most major cities, traffic accidents are a regular occurrence. Whether as pedestrians or those using bikes or cars, one is almost always at some risk when moving through the city. “About 100 [Read More]