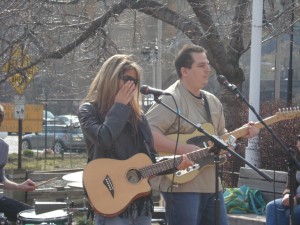 On the corner of Main and Gay streets, Laura Cheadle and her band impressed a gathering of music lovers basking on a beautiful Saturday afternoon in Manayunk.

Cheadle boasted her band’s family routes.  Her father, James Cheadle, accompanied the keyboard while two of her brothers completed the ensemble–James Cheadle on an addtional keyboard and Nick Cheadle on lead guitar.  On drums, band member Ben Smith, who has no relation to the family, is dubbed an “honorary Cheadle.”

At 5 years of age, Cheadle began her music career writing songs and touring in a choir called The Appreciation Choir.  The band had a music video featured on major TV stations and the opportunity granted Cheadle a taste of the life of a musician.  Her career didn’t stop there.

“At age 11, I played the drums and sang in a band with my brothers called Sibling,” Cheadle said.  “When I turned 16 and had my first heartbreak, I taught myself guitar and started writing.”

After learning guitar, Cheadle started earning a fan following and developed her distinct musical style of soul, funk and blues.  She just released a new album called Change (It’s Alright).  In addition to her music career, she is an avid supporter of the American Foundation for Children with AIDS .

“I am an advocate for children that are less fortunate,” Cheadle said.  “[I] love making music for a cause.”

North Light Community Center, located at 175 Green Lane, just off Main Street, has been a consistent presence in the neighborhood for more than 80 years, offering child care, raising money for scholarships for local […]

Ice carvers. Hot treats. Cold beer.  These are just some of the attractions that start Friday for the third annual Manayunk On Ice festival. The free, three-day professional ice-carving event takes place on Main Street […]

https://vimeo.com/24759811] Several years ago, John Kerwood was struck with a chemical imbalance that stripped him of his job as a mailman and left him battling clinical depression. But now, with the help of the North […]