At the Intersection of Magee Avenue and Keystone Street on Friday morning, the first pinch of soil was cast from a silver shovel as Mayor Michael Nutter helped to lead the way for the new Engine 38 Firehouse.

Due to the construction of the I-95 South ramp, the old Engine 38 Firehouse had to be demolished. Not only will the new firehouse bring back its original firefighters, but it will also serve as the city’s first entirely green municipal building.

“It has its green certifications,” said Commissioner Lloyd Ayers of the Philadelphia Fire Department. “It has a roof that is going to be a roof that is vegetated so that you can have control runoff and we can make the best of our rainwater.”

In order to make way for the new building, Disston Park will lose one of its basketball courts, but former president of the Tacony Civic Association, Louis Iatarola, said not to worry because the new building will give back to the community. 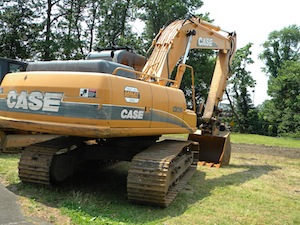 Construction for the new firehouse has already been begun at the intersection of Magee Avenue and Keystone Street.

“There’s a public neighborhood partnership in that the fire training room will double as a community room and will have public access,” he said. “We will be able to have neighborhood meetings there.”

It is estimated the new firehouse will be completed in 18 months, and for the neighbor who lives directly across the street from construction, Jennifer Andre, that may be 18 months too long.

“I hope it doesn’t take 18 months,” said Andre as she laughed.

Despite the wait, Tacony residents have high hopes for the new Engine 38 firehouse. Construction is already underway and on schedule.

Philadelphia’s City Council is attempting to pass a bill to replace the House of Correction located at 8001 State Rd., which currently houses 1,500 inmates. Plans are to replace the facility, which opened in 1927, with a [Read More]

Tacony: Franklin Towne Soccer Program Works To Establish Itself In the Northeast

Somerton: Playground Represents More Than a Space for Recess