Established in 1649, Tacony is a historic district in Northeast Philadelphia, ten miles away from Center City. It is the oldest continually-occupied neighborhood in Philadelphia and thanks to the Tacony Community Development Corporation, it has seen a resurgence of investment in the last two years

Henry Disston noticed Tacony’s easy river and railroad access in 1872, and moved his saw manufacturing facility from Kensington to a larger space in Tacony. Employing 5,000 people, Disston manufactured three quarters of the handsaws used in the US at the time. Despite its economic success in the 19th century, Tacony struggled as industry moved out of the city in the mid-20th century. 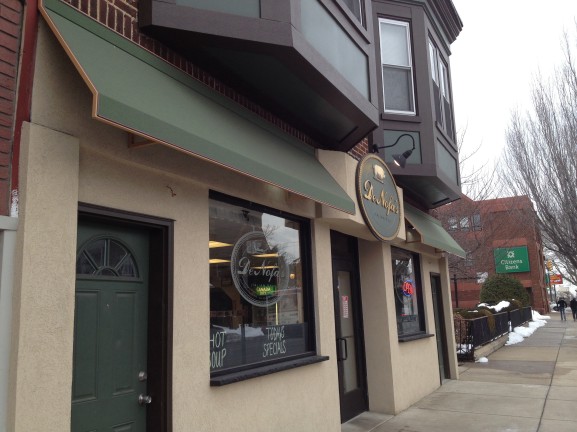 Fast-forward to 2011: Like many neighborhoods in Philadelphia, Tacony sought to bounce back from the recession that started in 2008. Around that time, Alex Balloon took over as the Corridor Manager for the Tacony Community Development Corporation, and worked with the CDC’s all-volunteer board members to launch a new direction for the organization.

It began the Historic Tacony Revitalization Project, with a focus on Torresdale Avenue, the main business strip in the neighborhood. Since then, several major projects have been completed or brought into the second phase of renovations.

Balloon considers the renovation of 16 commercial historic storefronts along Torresdale Avenue as the most successful project completed by the CDC. Balloon, the board, the City of Philadelphia Department of Commerce and local business owners worked together on this $250,000 storefront revitalization project.

“Whether it was a new coat of paint, replacing aluminum siding for more modern and attractive storefronts, or hiring a local sign-maker to replace old signs with new, attractive, illuminated signs,” Balloon said, “this project really got the community excited and involved.”

“The work was unbelievably significant in that visually, it’s obvious to everyone driving by – 1,400 people drive down Torresdale Avenue daily,” said Scott DeGirolamo, the owner of the local tech store, The Computer Guy. “It is encouraging to the store owners themselves. It’s a real Hail Mary that is providing significant improvement in this whole area. It’s highlighting the diversity of businesses that were located here previously. Before these renovations, that was unrealized.”

DeGirolamo’s store now has a noticeable electric sign in the top-center of his historic building. Balloon said the building used to be an old post office and they restored the building’s sign to the Art-Deco style of the building’s origins. This spring, the front will also be painted and additional lighting will be added outside.

The modest improvements made at his shop have helped DeGirolamo’s business.

“We don’t have to plot a graph to see that business has improved,” he said.

Georgeanne Huff-Labovitz, owner of Marie Huff Hairdressing and president of the CDC’s board, has been excited by the board’s recent work with Balloon. A business owner and lifetime resident of Tacony, Huff-Labovitz has her finger on the pulse of the neighborhood. She noted that Wellens Bridal Shop was seriously affected by the CDC. Huff-Labovitz saw that many who passed by weren’t even aware of the shop or its purpose, but after renovating the property and putting in large storefront windows, the shop has seen increased business, she said.

“Once people start to see things happening they want to get involved,” she added.

Despite the harsh winter, Huff-Labovitz has noticed increased sales at her salon. The CDC has a lot to do with it, she said.

“I definitely think foot traffic has increased,” she said. “Right now, we’re working with shoptacony, a website that shows off businesses in the area, allows them to link to social media, write articles about specific businesses, put up pictures. It is really revitalizing the neighborhood in baby steps.”

Along with the renovations, getting the word out about the CDC’s work has been an important part in the organizations plans. Its site offers news and promotes any events and projects happening in the neighborhood. It also offers links to local businesses and allows users to browse all businesses in the area through shoptacony.com.

Torresdale Avenue offers residents just about any service they might need, Balloon said.

“Whether it be a dentist, grocery, hair dresser, restaurant or clothing store,” he said. “Getting the word out on the opportunities available for local shoppers is a top priority.”

To broaden their audience even further, Balloon and the CDC launched a two-page advertorial in the Northeast Times. The ad highlighted recent projects and restorations and was just another way of letting people know the changes happening in the neighborhood. Around 110,000 households received the advertorial. Many of those readers might not have Internet access, Balloon noted.

Along with the refurbishing of 16 existing businesses, the CDC helped 14 brand new businesses join the neighborhood. Many of the newly occupied spaces had been abandoned for years, and filling those spaces, offering new opportunities to shop and creating more jobs is as important as helping the established businesses, Balloon said. The CDC will help any investor or business owner find property records, values, as well as discuss possible restoration of specific spaces. Overall, 32 people were employed with the creation of the new shops, Balloon said.

“The Tacony CDC Board thought it was an ideal match for us to partner with Ready Willing and Able,” Balloon said, “to reduce the amount of litter on our commercial Avenue.”

“Most store fronts sweep up five times a day, but some fronts that are vacant,” said DeGirolamo. “They [Ready Willing and Able] will help clean up those areas that aren’t so well kept. It provides a little bit of consistency, and some Big Belly trashcans are coming in too.”

Huff-Labovitz shared in Balloon’s excitement for the project and was glad the board could work with him in bringing Ready Willing and Able to Torresdale Avenue. Balloon initially hoped to get a grant from the city that would help fund the project, but that money didn’t come through.

“We decided we [the CDC] would put the money out,” Huff-Labovitz said. “Helping people looking for a second chance? The whole thing is a win-win. Keeping the neighborhood clean and supporting each other, just another wonderful idea Alex has come up with.”

The CDC is now working on a recycling plan, as well as further improvements and renovations.

“Just keep watching,” Huff-Labovitz said. “Every neighborhood has problems but we’re really trying. A lot of people who have moved away are wanting to come back. They see what we’re doing here and are excited by the change.”

For months, residents and leaders of Mayfair and other communities in Northeast Philadelphia have been fighting for a split of the 15th Police District. Mayfair residents, like John Farrell (right), expressed their concern about the [Read More]

Philadelphia City Councilman-At-Large Dennis O’Brien was taught at a young age by his grandfather the inherent value of giving back to the community. Years later, O’Brien is doing just that with the Northeast Philadelphia Youth [Read More]