“We’re sort of a gateway between the outside and the community, and it’s a way for the community to know what’s happening outside, connecting to North Philadelphia,” said Rafael Damast, the arts program manager at Taller Puertorriqueño, a Latino culture organization in Fairhill.

The show looks at understanding the cultures of the peoples in Philadelphia and at how the city’s demographics are changing, Damast said.

Damast, the passionate director who runs the Lorenzo Homar Gallery, said he sees about sixty visitors a month, with patrons coming from as far away as New York City. However, he also sees local community members with an interest in Latino art and students from local schools at the gallery.

“Art isn’t just something to be admired,” he said. “It’s a reflection of the people and it’s a way of communicating.”

The move to Taller Puertorriqueño was a perfect fit, Damast said, and allows him to learn more about his own Hispanic heritage and about the Philadelphia Latino community. 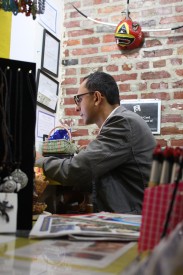 The exhibit which just closed at the gallery, Children and Youth Create Art, ran from August until early September and exhibited the work of local children enrolled in Taller Puertorriqueño’s youth art programs. The kids explored connections between festivals around the world, specifically Latin countries.

The community has been very receptive of the gallery and its mission, Damast said.

Two artists will be profiled in the show, said Damast, including photographer Leticia Roa Nixon and Cesar Viveros Herrera.

Nixon’s exhibit, Aquí Estamos, will document the Mexican migration into Philadelphia through photographs.

Viveros, known for his murals across the city, will use his personal experiences as a Mexican immigrant to demonstrate how he feels he is contributing to the Philadelphia experience. His show, called No me conformo, or I will not conform, will display in the main gallery space, using vibrant colors from the Aztec culture.

“Understanding one’s culture is a way to find our strength,” Damast said.

While the gallery’s purpose is to share art with the community, it further looks to educate visitors about the Latino culture in Philadelphia.

Claiming Places will run at Taller Puertorriqueño until July, 2013.