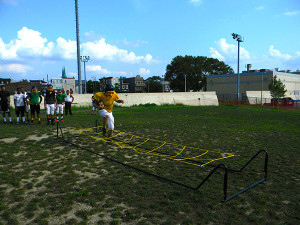 At first sight, the field on Front and Berks Streets that the Kensington Tigers call home is unremarkable but manageable. It seems to be about the right size. There is good clearance from any obstacles on all sides. The grass is a bit patchy, but not horrible. But when you start to walk though the field you begin to notice that it isn’t quite as manageable as it seems: the field is pitched, it drops about 15 feet between the far ends of the field; there are chunks of metal and glass the punctuate the grass; and this is what it looks like after it’s been improved.

Before Kensington Creative and Performing Arts High School was erected nearby, the field had fallen into disuse with the general public. It was an overgrown, empty lot that was the scene of at least one murder and, according to Erb, countless other crimes.

“Over here, it was a wasteland,” Erb said. “You could smell urine from a block away, prostitutes walking up and down the street. And that’s what it was.”

Erb and his father spent months working on that wall. The canvas they started with was anything but untouched. It was covered in graffiti and the words “Kill Cops, Smoke Dust” were emblazoned large enough to be seen from the street. But when Erb looked at this wall, he did not see it as a symbol of how bad the neighborhood was, he saw it as a possibility of what it could become. So, they began to paint “Kensington Football” in varsity letters. Erb wanted the wall to be a beacon for the kids in the neighborhood, something they could drive past 20 years later and remember their time on the field fondly. 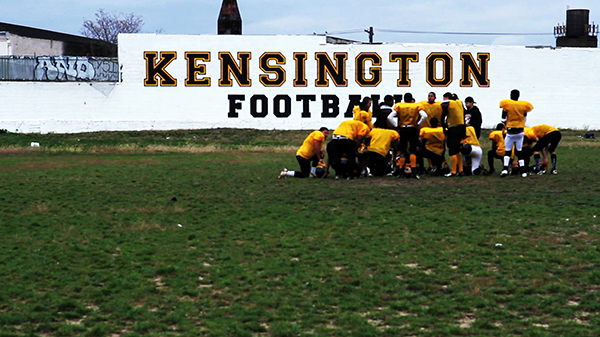 Erb and his father, a retired carpenter, cut out guides for the letters, built scaffolding along the wall and even had to use simple paintbrushes to cover the wall.

“The wall was so rough, you know? We thought that maybe we could roll it. Not a shot,” Erb recalled laughing. “Because when you roll it you’re missing like 65 percent.”

But six months after Erb and his father finished their grueling work, the wall still stands untarnished by graffiti or vandals, stark white and for all the world to see.

Ellwood Erb’s goals for the Kensington Football field are simple, but by no means small. He wants to transform the pockmarked terrain into a field that the team can be proud of. Erb said he wants to lay AstroTurf to cover the rocks and glass and replace the empty sidelines with bleachers and cheerleaders. Not only does he envision a field free of the debris and danger for the players, but he sees the home of the Tigers as a center for the community–a place where the families of the neighborhood can come together on Friday nights and share the thrill of the game.

Additional thanks to videographers Steve Reitz, Andrew Sun and Jess Ruggierio. For more about the story of the Kensington football team, visit RiseoftheTigers.com.

Kenneth Blood, 66, is a lifelong resident of Philadelphia. In the 35 years he has lived in Kensington, Blood has devoted his time providing rehabilitated addicts with transitional living at Trinity Presbyterian Church. What is [Read More]

When the Emerald Street Park received a grant earlier this month from the Pennsylvania Horticultural Society, the emphasis was put more on its value than the actual dollar amount. “The project’s worth is not something [Read More]

Early this month, the New Kensington Community Development Corp. announced its Adopt-a-Block program, which will have residents act as neighborhood-cleaning ambassadors for certain blocks in Kensington. NKCDC is not only looking for individuals who reside [Read More]