Although the FTC soccer program is 10 years old and a championship winning team, they faced challenges against other longstanding programs in the Northeast.

Head coach and 2012 Southeastern PA Soccer Association Coach Of The Year, Brianna O’Donnell, has been with the Franklin Towne soccer program for five years and is working hard with her women to accomplish their goals.

“Being able to compete with premier high school programs is something we are working to achieve,” said O’Donnell. 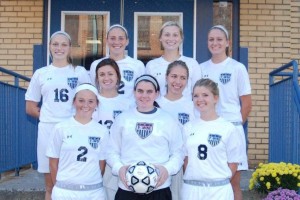 The teams’ current Public League record is 12-0 and has an overall season record of 13-3-1.  Over the past four years, the current 9 seniors (right)  have won 57 games total, a record they hope to increase.

“It is really important that my team mates and I are able to represent our neighborhoods on the soccer field. We all grew up in the same area and the community support has been great during our games,” said Gilborges.

Franklin Towne Charter High School has become a staple of educational growth in Northeast Philadelphia. The school, founded in 2000, stands as a viable option for families seeking alternatives to Philadelphia public schools as well as […]

Volunteers hustled around all weekend at Mayfair Memorial Playground at Lincoln High School to install adult exercise equipment and put in a seven-foot fence, which is Phase II of the three-phase update for the playground. […]

After being slated to close almost 21 months ago, St. Hubert Catholic High School for Girls in Northeast Philadelphia is stronger than ever with two new administrators, high morale and increasing enrollment rates. On January […]