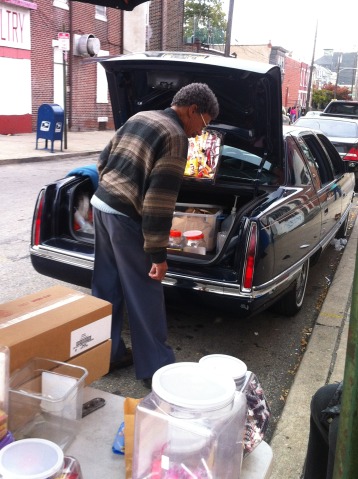 Among the storefronts on Lancaster Avenue in West Philadelphia is a tiny snack stand. Located on the corner of Lancaster and Preston Street, this stand thrives because of the electric personality of its owner, Harold Cliett.

Cliett (right) owned a storefront called the JHD Variety Store on Preston Street for 24 years before relocating in 2009 to the stand he has now.

Instead of paying rent, he operates his stand out of the back of his 1995 Cadillac Deville.  His inventory includes cookies, taffy, chocolates and Slim Jims. Almost everything costs only a nickel.

“I love coming here every afternoon and just talking to people,” said Cliett. “I like to treat people the way I want to be treated.”

Cliett shows no signs of slowing down even though he has almost reached his 80th birthday.

He credits exercise and staying away from alcohol as the reason for his vitality and energy at his age.

Cliett can be found happily helping customers five days a week on his corner.

Jodi Cianci is serious about her workouts. She trains as if her life depended on it – because it does. “I treat my exercise like a doctor’s appointment,” Cianci said. Cianci was diagnosed with Parkinson’s [continue reading…]

Over the past year, the Archdiocese of Philadelphia has combined parishes in various Philadelphia communities. Earlier this month, the archdiocese announced Saint Donato’s Catholic Church, in Overbrook, would merge with another Catholic church in the [continue reading…]

Lower Lancaster Avenue has attracted many new businesses in recent years as revitalization projects have inspired business owners to open up shop. The commercial corridor, which spans from approximately 37th Street to 44th Street, had [continue reading…]