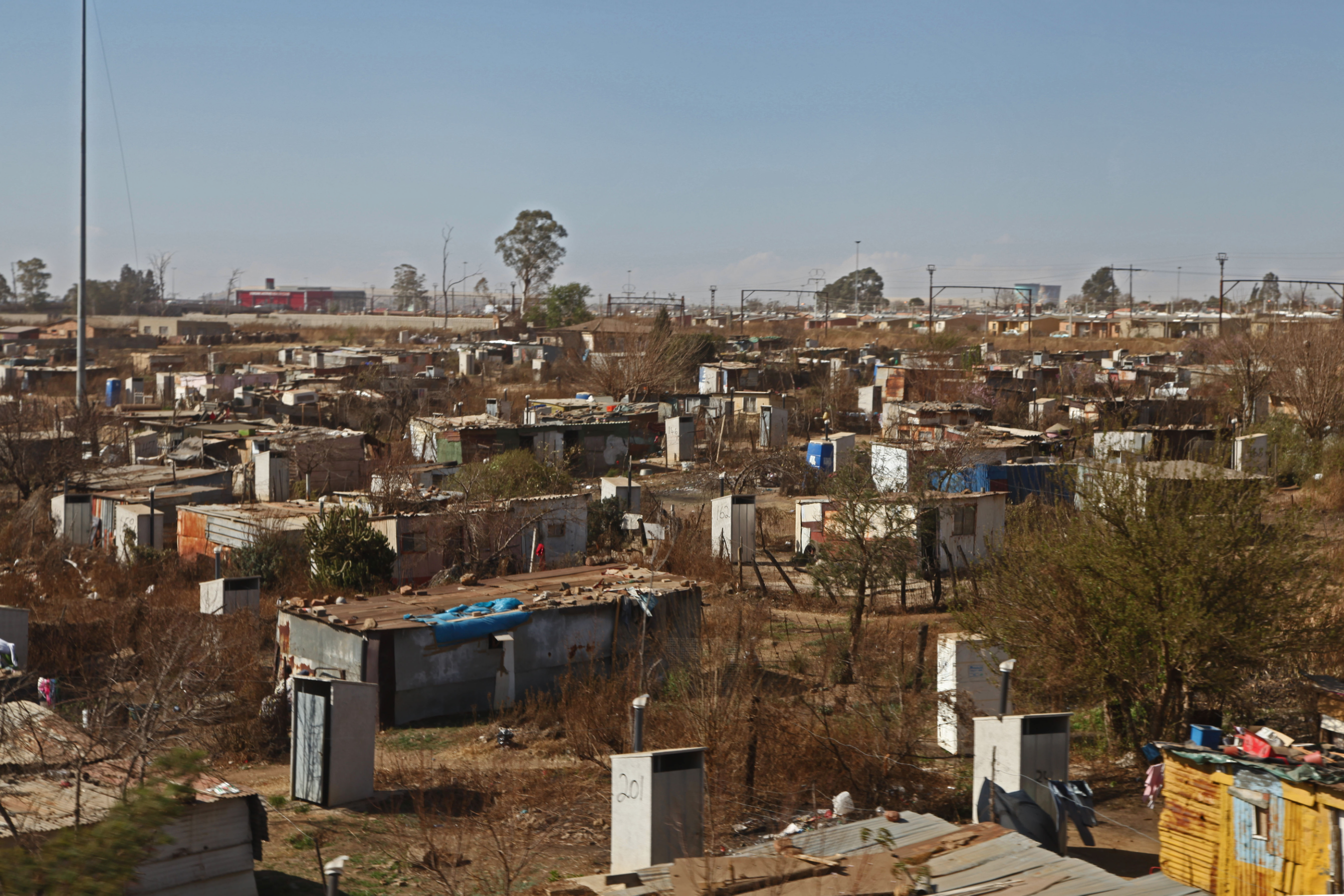 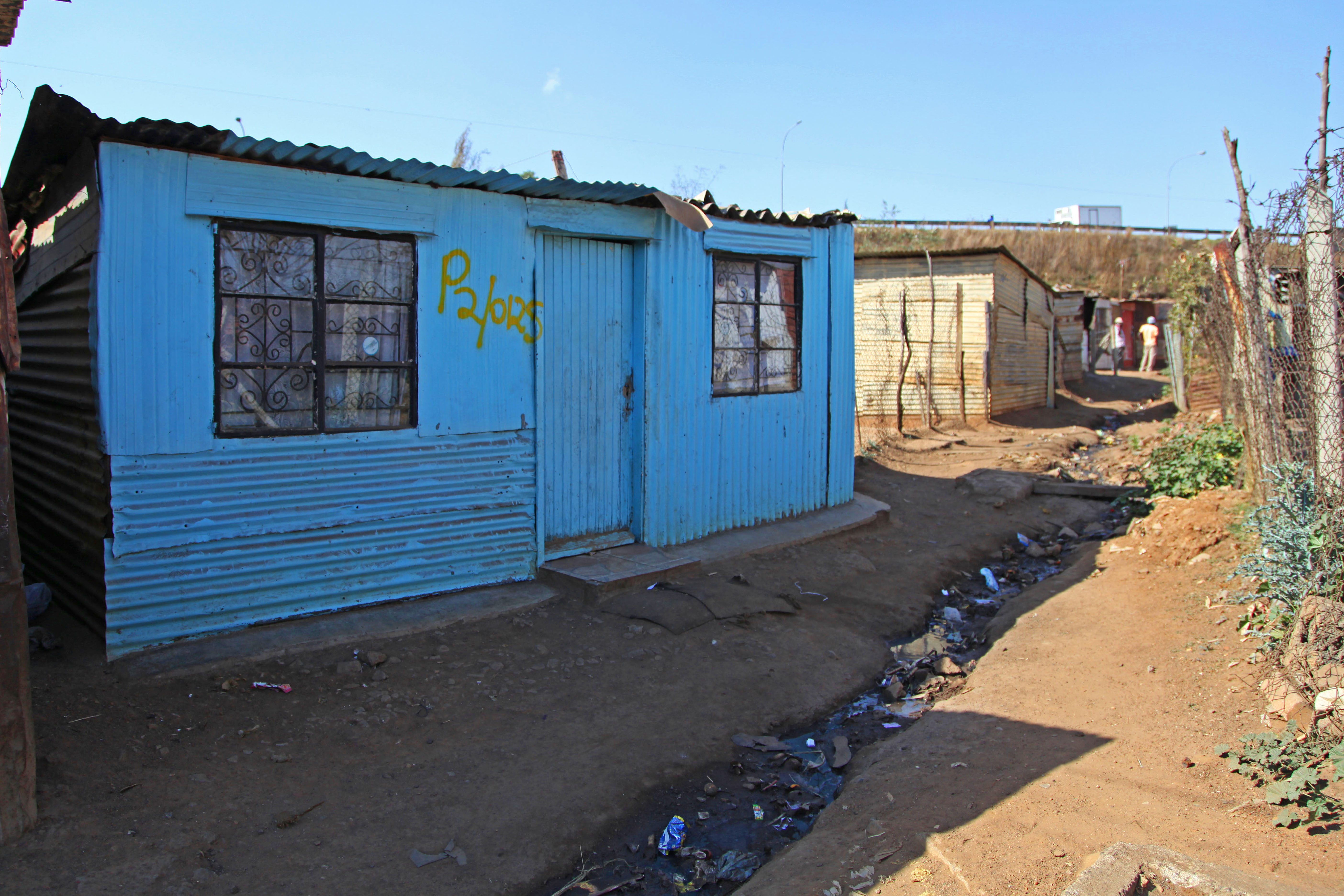 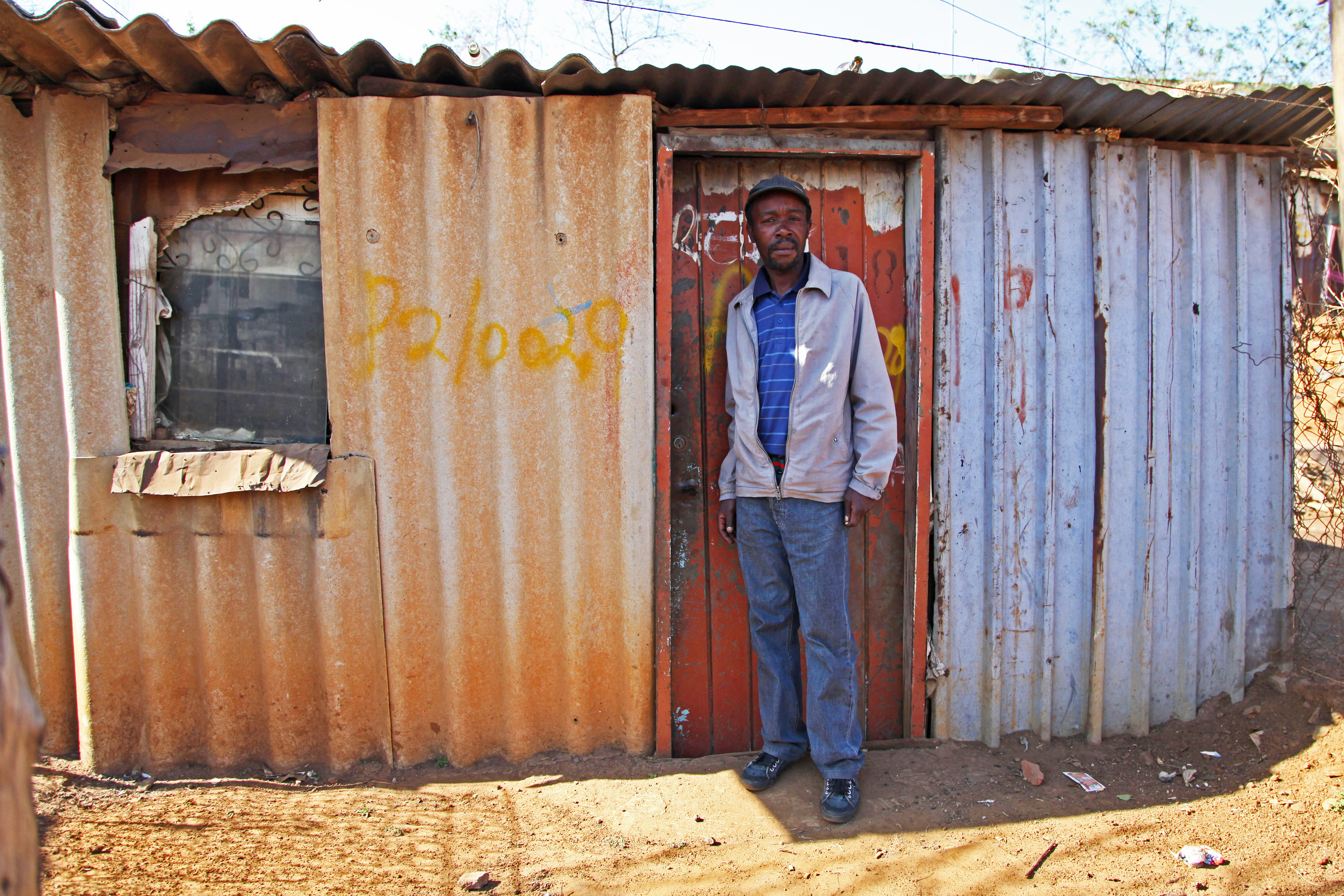 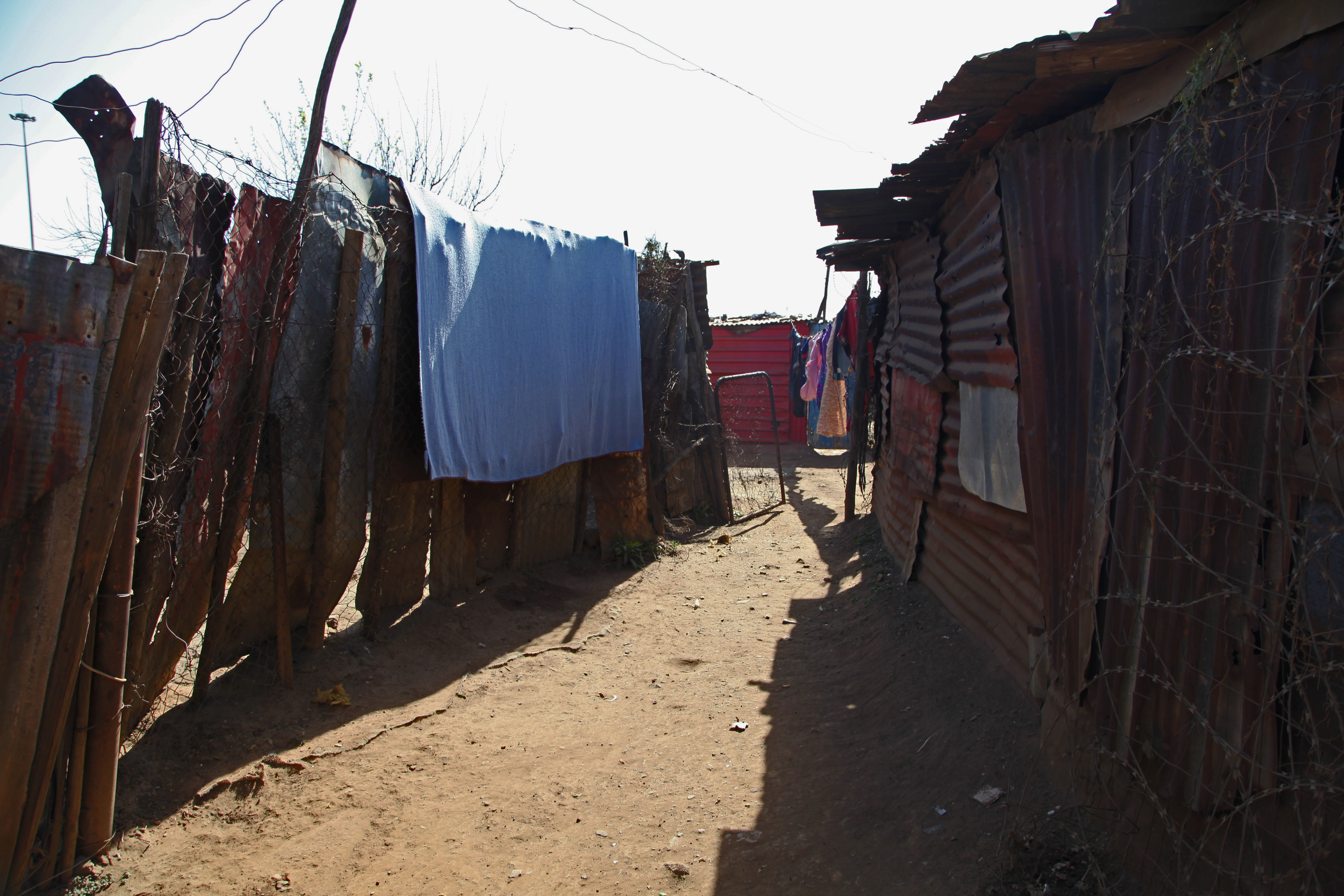 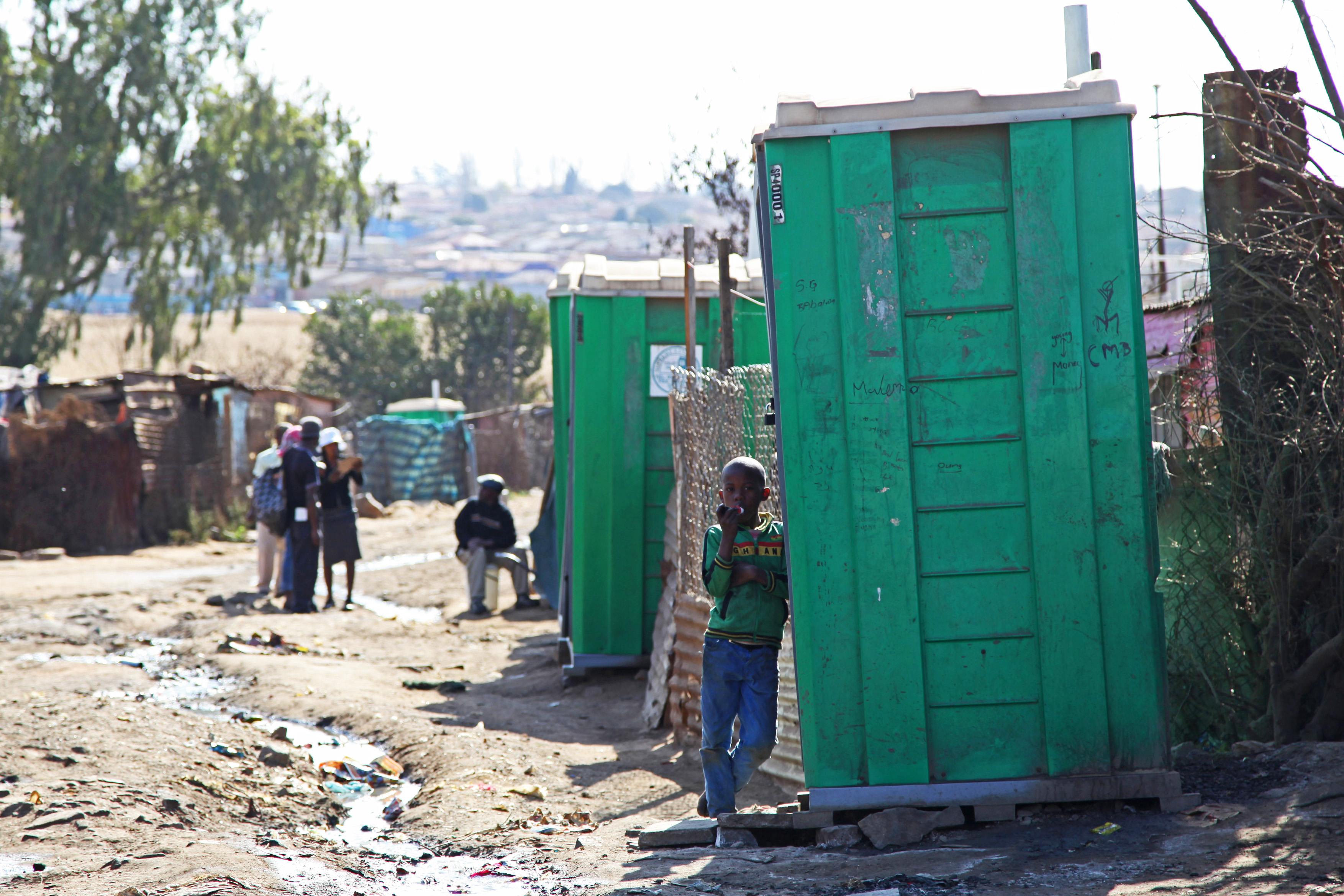 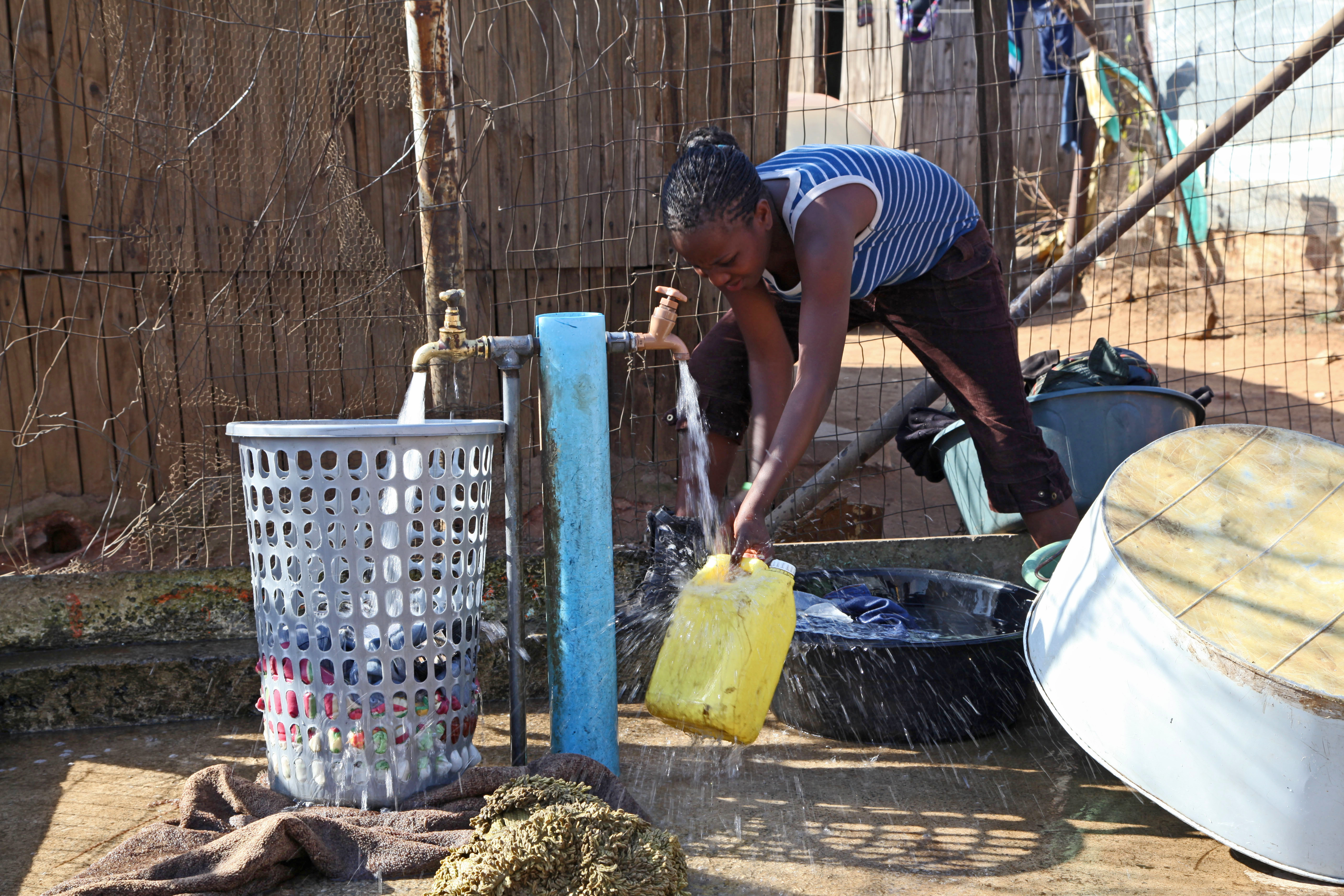 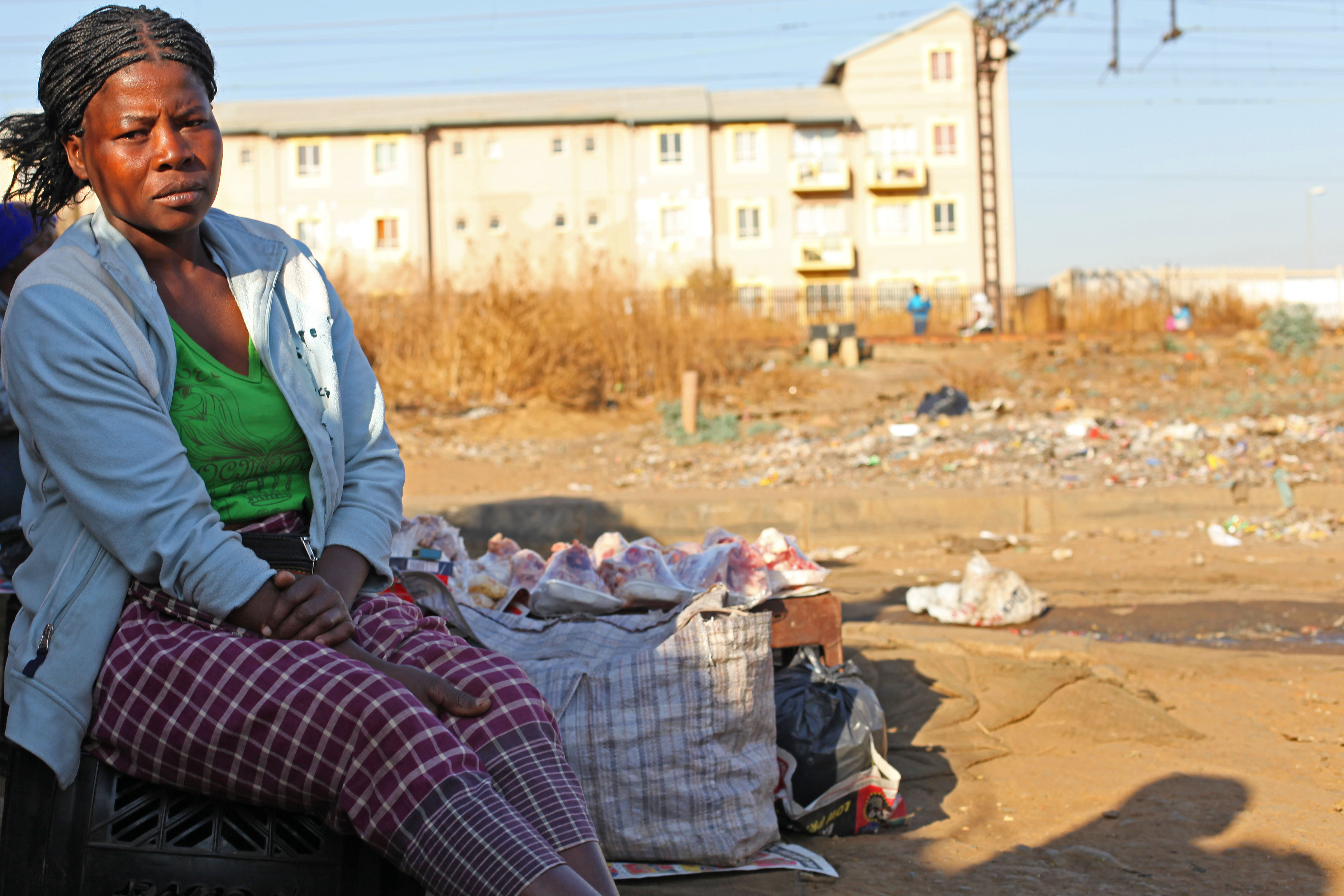 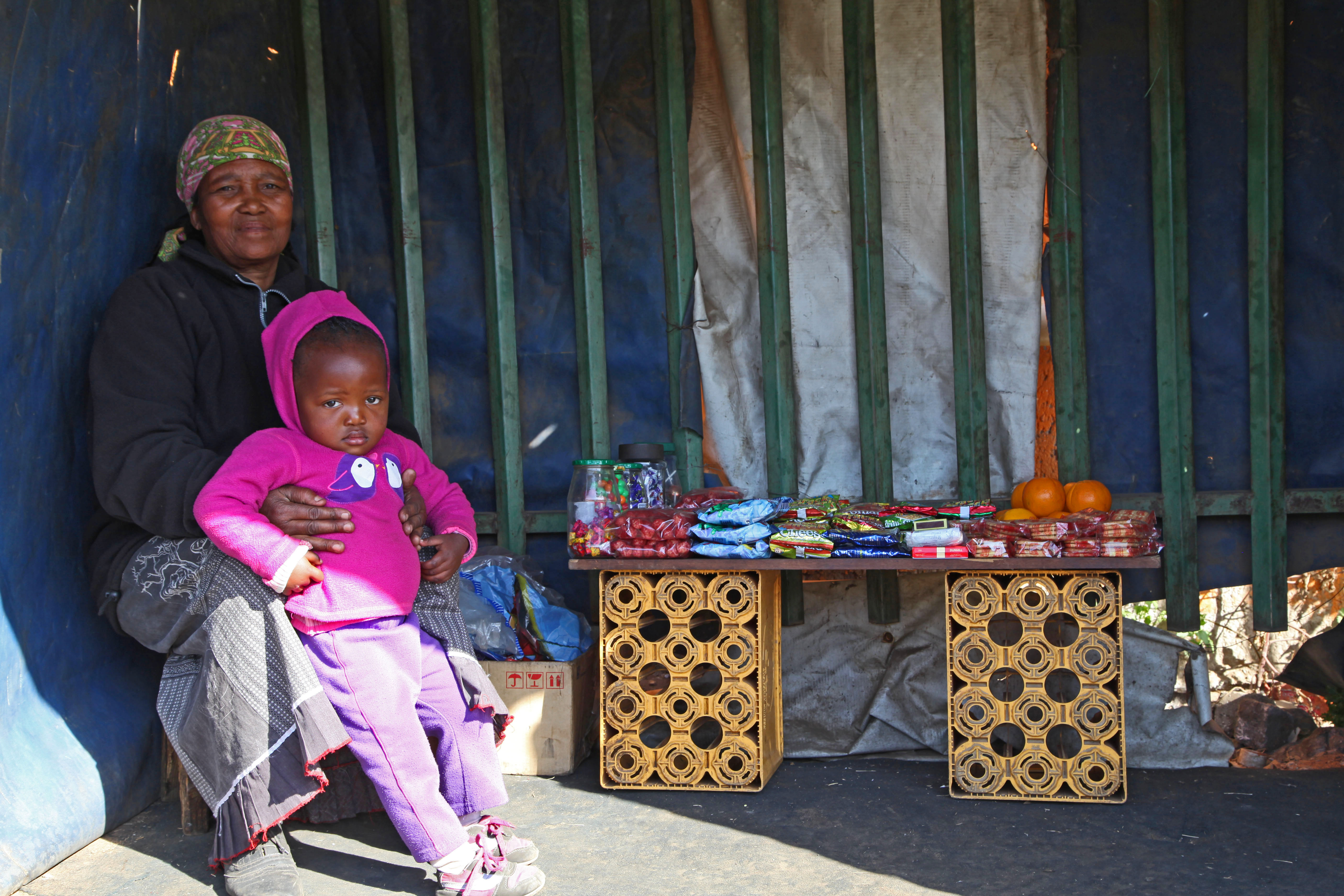 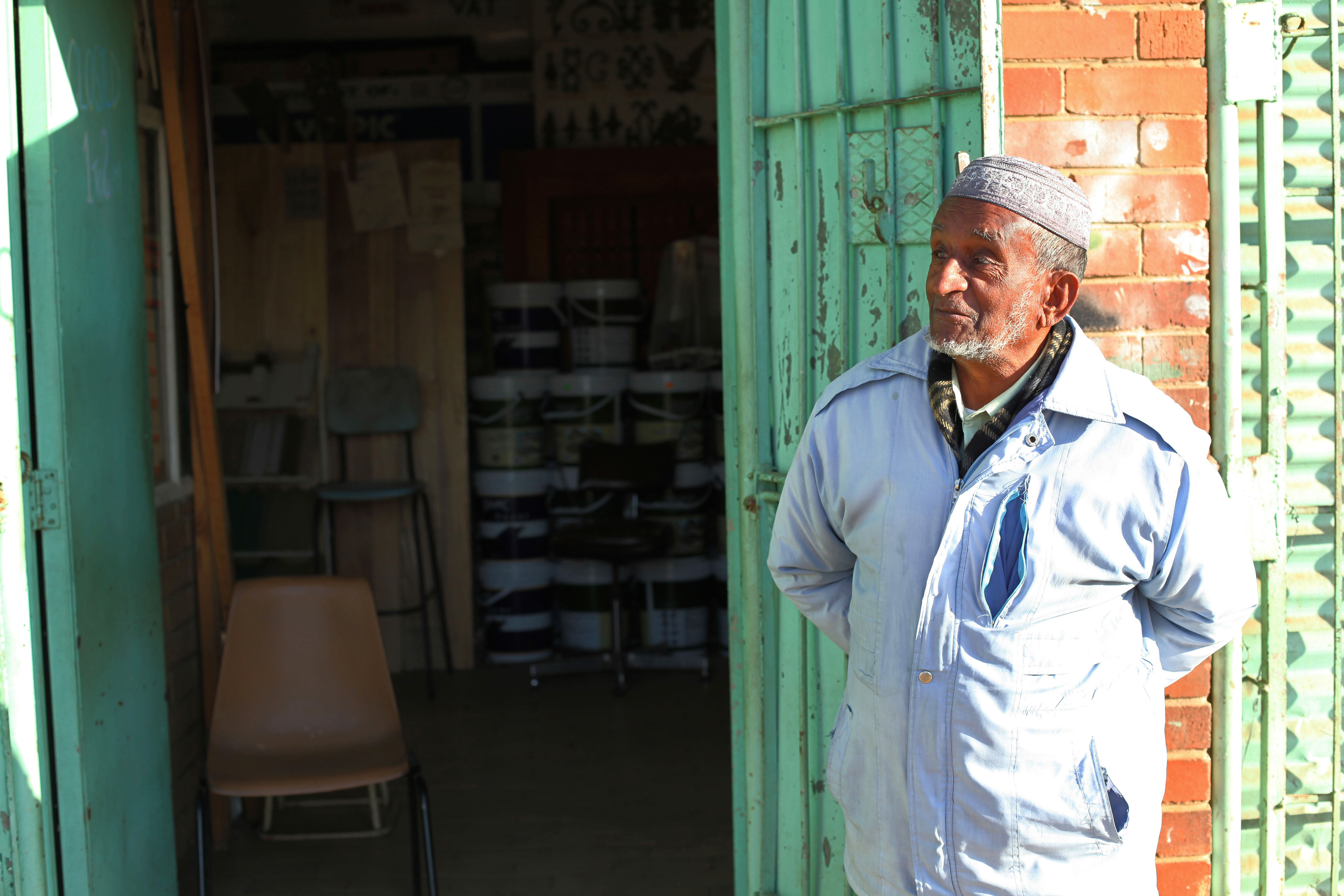 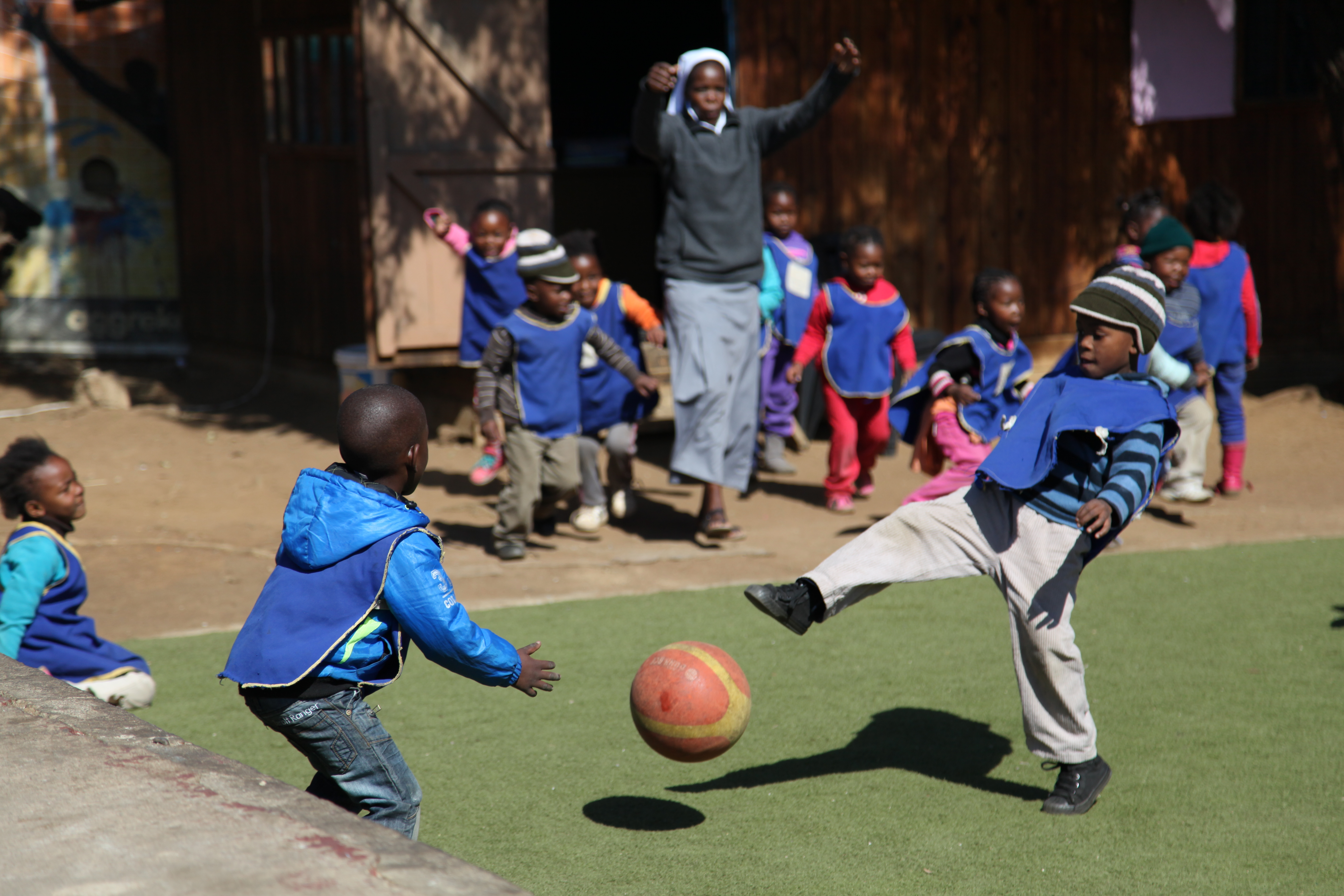 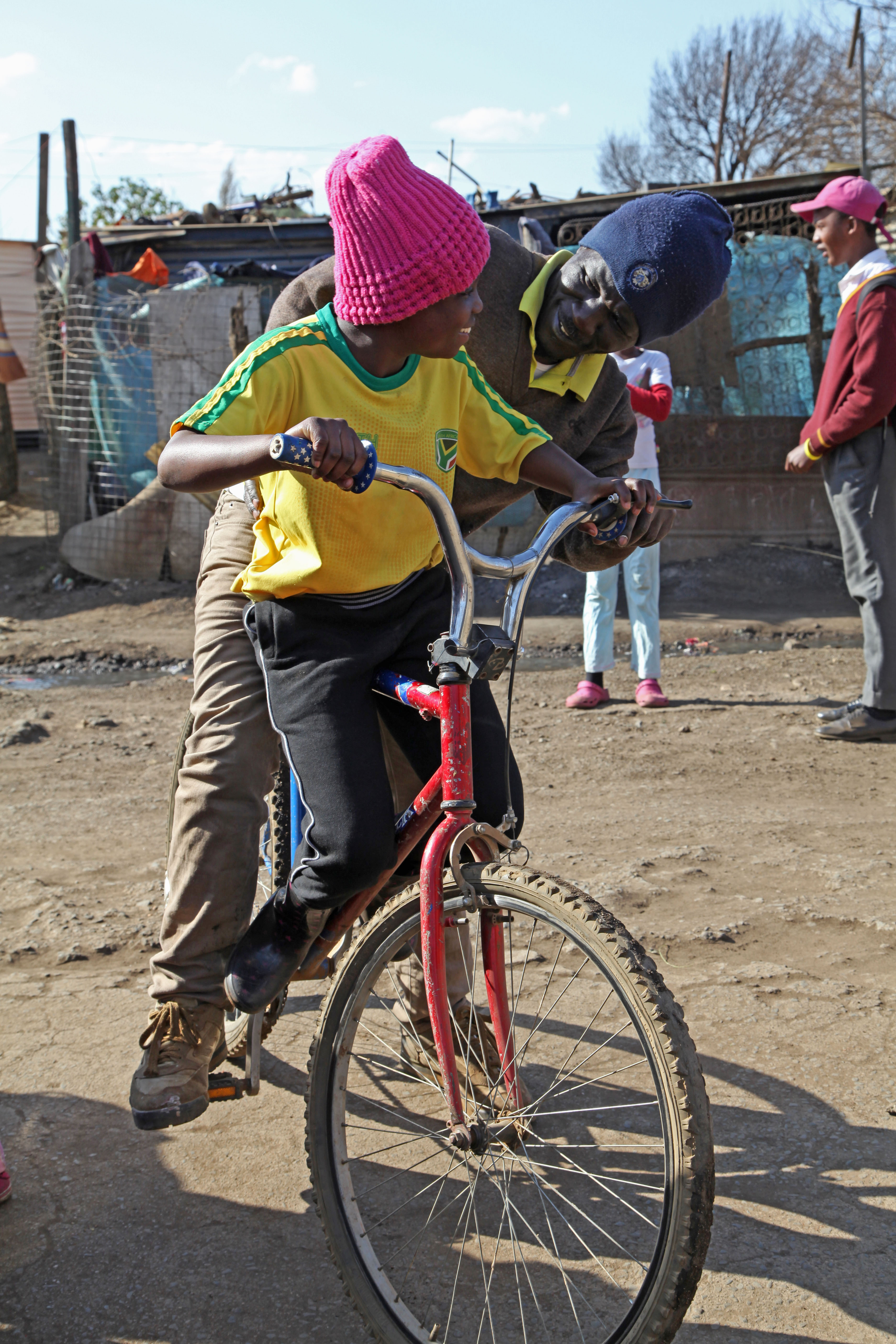 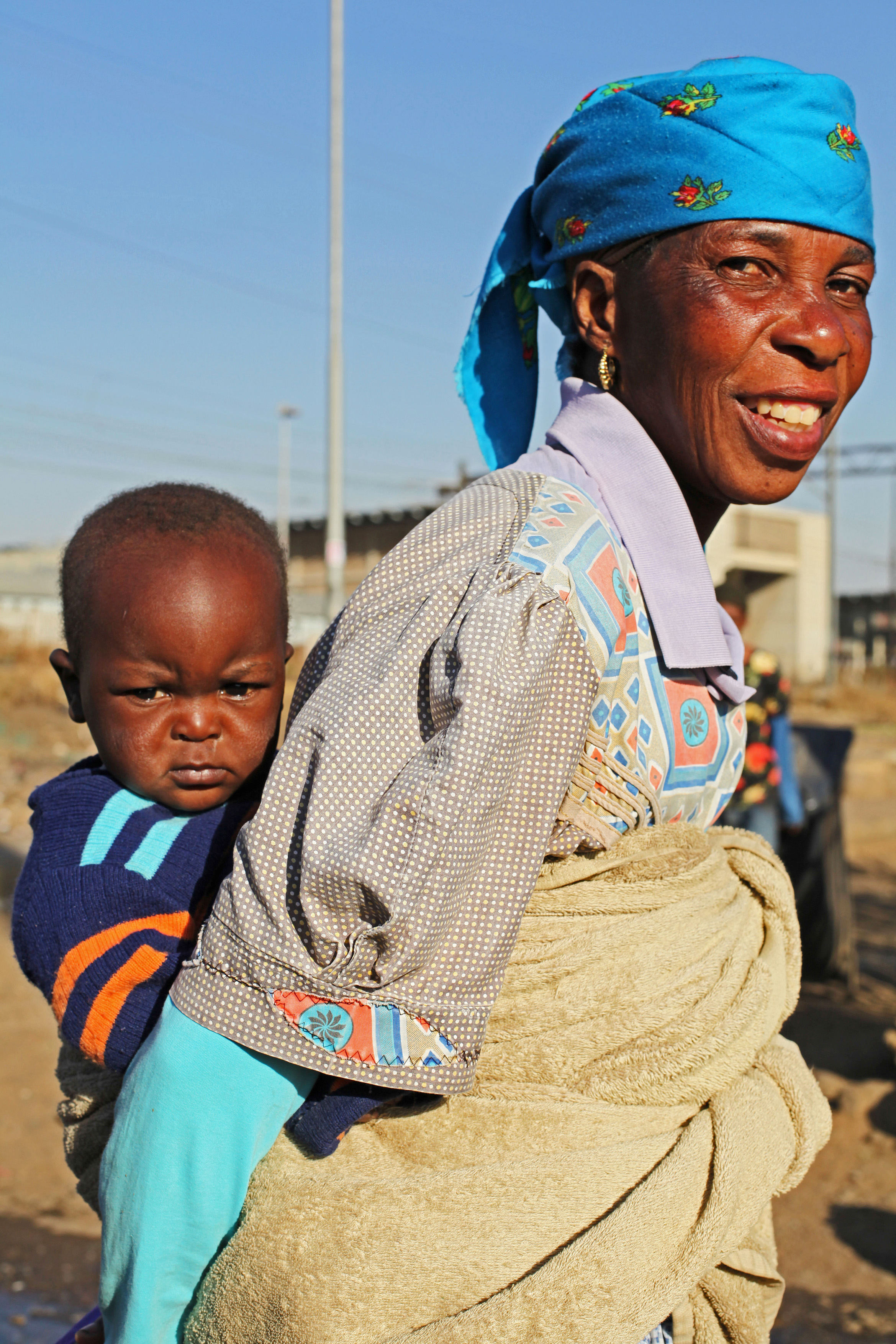 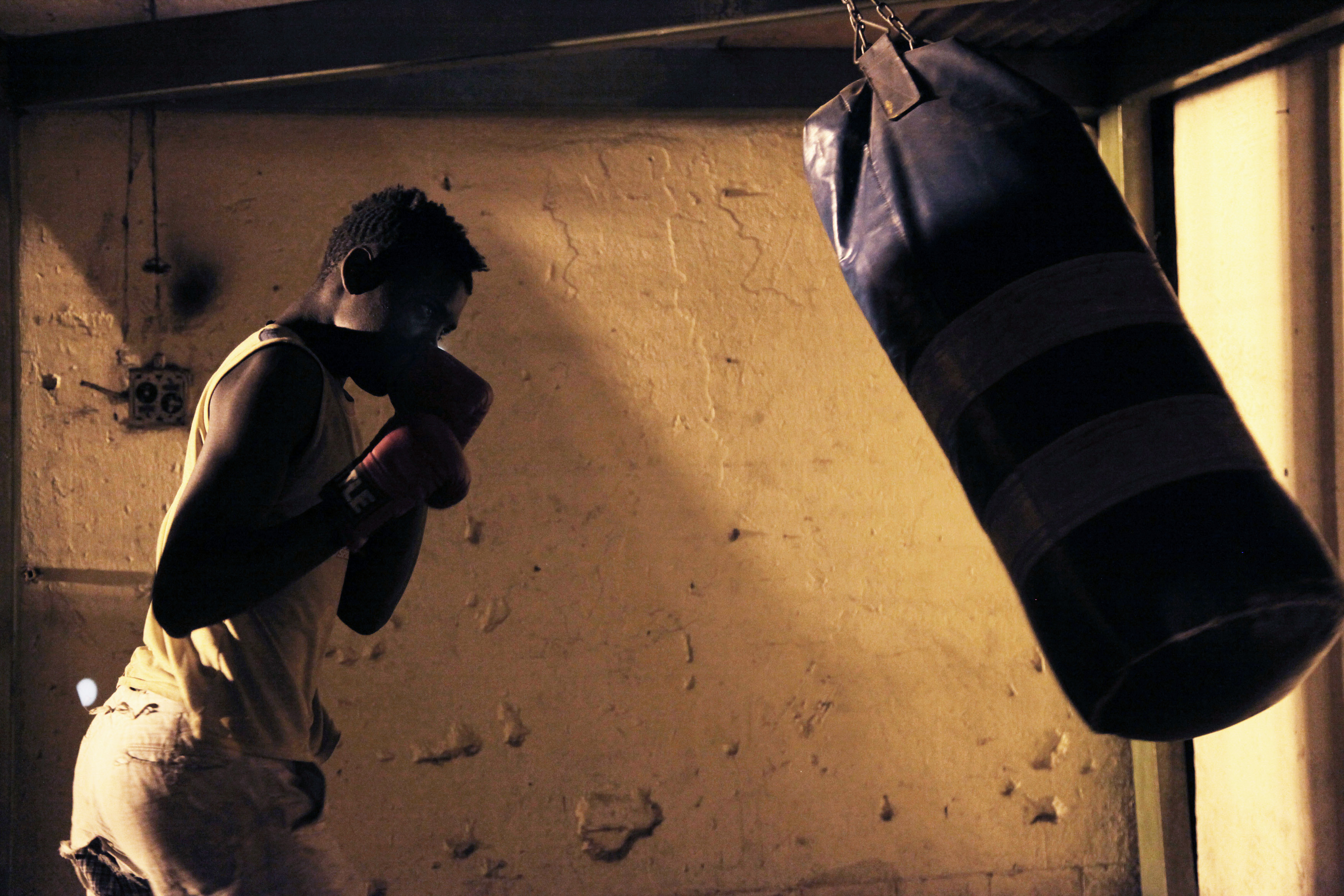 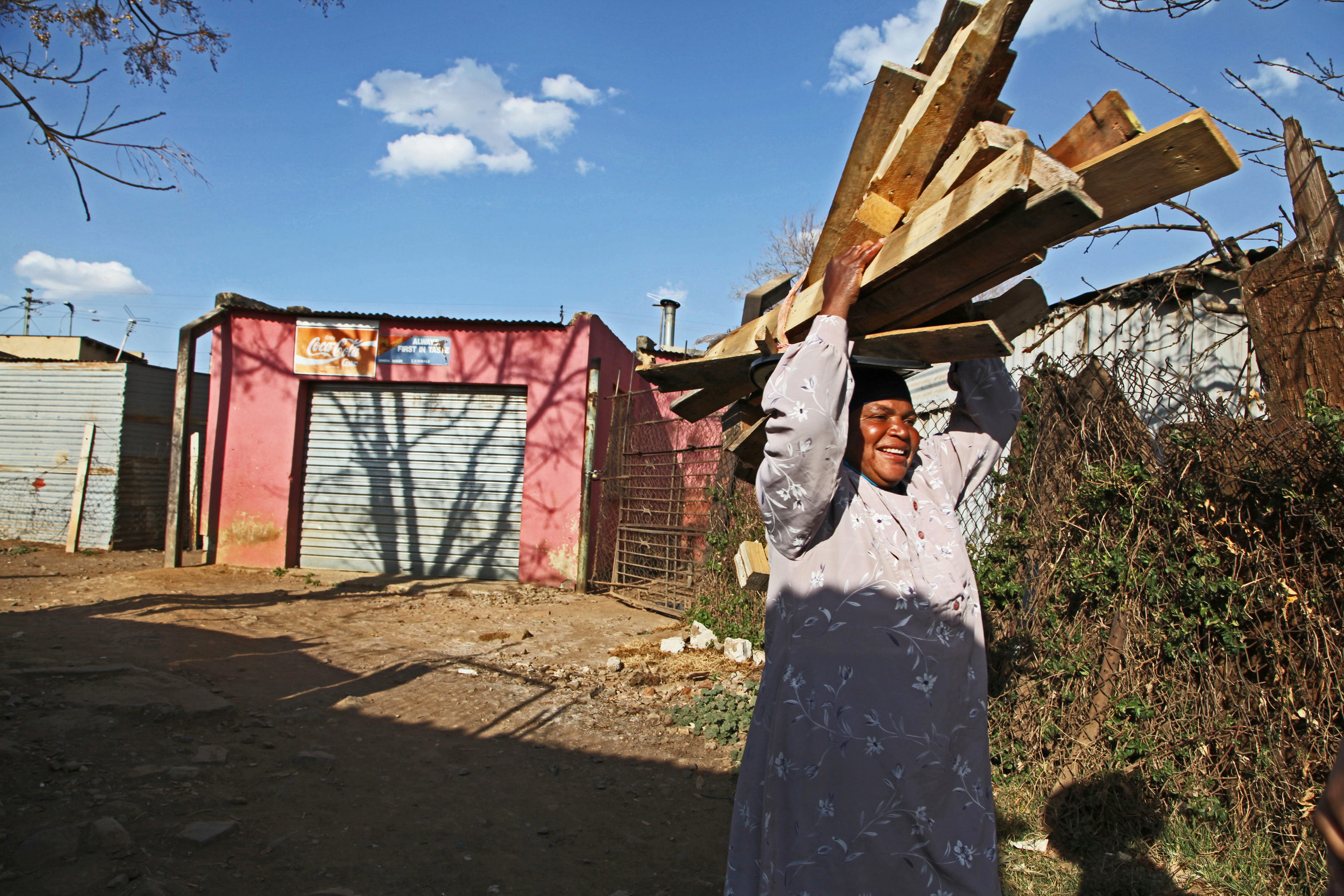 <
►
>
Despite a high percentage of unemployment in Kliptown, people in the area have historically created income opportunities for themselves. Estar Balayi who sells food along the street.

South Africa, the world’s largest producer of gold, is a nation of immense natural resource wealth that helps secure it’s unrivaled position as the richest and most developed country on the African continent. However, South Africa has an unenviable distinction: the highest income inequality in the world.

This income inequality  is evident in statistics like the average black household in South Africa earning just 1/6th the annual income of that nation’s average white household. This income disparity persists despite a seemingly phenomenal 169 percent increase in black household income during one ten-year period following the formal end of the repugnant system of apartheid in 1994.

The community of Kliptown on the southwest edge of Johannesburg, South Africa’s most populous city, is an area embedded with the high rates of poverty and unemployment (72%) driving that nation’s income inequities. Kliptown is the oldest section of Soweto, one of the ‘townships’ reserved for non-whites under the racial separation scheme of apartheid.

Kliptown has a historic place in the long struggle to end apartheid being the site of the 1955 Congress of Peoples where non-white South Africans issued the Freedom Charter laying out specific terms for a non-racial future for their nation, terms later incorporated in the post-apartheid constitution. 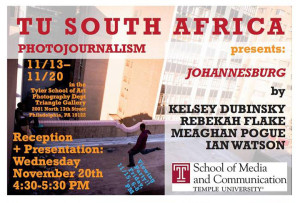 Temple University photojournalism student Kelsey Ann Dubinsky spent time inside Kliptown during her participation in the 2013 South Africa Study Away Program operated by Temple’s School of Media and Communication. Not content to snatch images from scratching the surface of Kliptown, Dubinsky immersed herself in that place and its people, enabling her to produce visuals from inside/out views.

While deprivations are daily realities for Kliptown residents, as captured in Dubinsky’s images seen above, the spirit of resilience pervasive in this hardscrabble community also radiates from Dubinsky’s photographs. Dubinsky’s photographs present inside images of Kliptown, that place that most South Africans don’t know exists.

Her images, and the work of classmates Meaghan Pogue, Ian Ruckus Watson and Rebekah Flake, are currently on display at the Triangle Gallery at the Tyler School of Art. A reception and presentation of the work will be held on Wednesday at 4:30. See here for details.

Linn Washington Jr. was the co-director of the South Africa Study Away program during the summer of 2013.

The Kliptown Youth Program: Building A Community Through Engagement

[vimeo 72815154] Outside Johannesburg, South Africa lies Kliptown. Over 40,000 people reside in this informal settlement made up largely of tin shacks and decaying buildings. The Kliptown Youth Program (KYP) is a local treasure recently honored [continue reading…]

[vimeo 73042086] The World Bank’s development indicators say South Africa has one of the highest levels of income inequality in the world. A small ten percent of the population control the majority of the nation’s income.  [continue reading…]

Social Media for The Congress of South African Trade Unions

[vimeo 73351018] In post apartheid South Africa there is a major focus on access. Citizens should have access to the resources they need and to the people and organizations who can provide them. But, as a [continue reading…]