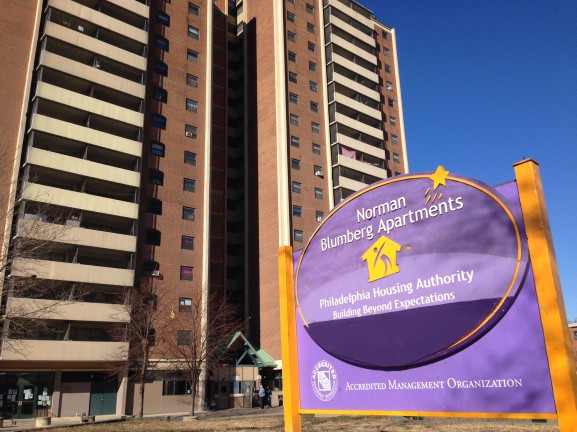 The Philadelphia Housing Authority announced last month that it will receive a $500,000 grant to plan redevelopment at the Norman Blumberg Apartments in North Philadelphia.

The grant was part of $4.37 million that was awarded by the U.S. Department of Housing and Urban Development in the form of Choice Neighborhoods Planning Grants to nine cities. The grants are aimed at allowing cities to “develop and implement a comprehensive neighborhood revitalization strategy,” according to HUD.

The Blumberg Apartments, which consist of more than 500 units including three high-rise towers, is the PHA’s “most distressed high-rise property,” according to HUD’s grant information. The area included in the grant would stretch from Cecil B. Moore Avenue to the southern boundaries of Girard College and west from Girard College on Ridge Avenue to 27th Street.

The grant for the area around the Blumberg Apartments, which are located on the 2300 block of West Jefferson Street, will go toward a plan that aims to develop affordable housing and encourage development on vacant land around the apartments, according to HUD.

According to the grant information, the grant allows the city to build around resources in the area.

In May, Project HOME announced plans for a 30,000 square-foot wellness center at 21st Street and Cecil B. Moore Avenue, which the grant said will provide health care and social services to the area. Also, officials from Girard College are working to enhance the surrounding neighborhood, according to the grant.

“We hope to be a community focal point,” said Clarence Armbrister, president of Girard College, who added that he hopes PHA has the same level of success it had in revitalizing the area around the Richard Allen Homes in North Philadelphia.

Officials from PHA did not return calls for comment.

North Philadelphia: Residents Wonder If PHA Auction Will Have an Impact

https://vimeo.com/33286225] The Philadelphia Housing Authority plans an auction today for 100 vacant, scattered-site properties throughout the city. Eva Gaymon, who has lived in North Philadelphia for 43 years, said she would like to see houses [continue reading…]

Inside the first floor of a row home on 28th and Diamond streets sits the Strawberry Mansion Community Development Corp. (SMCDC) Splashed across the orange and cream walls are newspaper clippings and building plans. Papers fly [continue reading…]

Although Philadelphia experienced population growth for the first time in decades according to the Census, neighborhoods are still struggling with disinvestment that left pockets of people throughout the city neglected and unable to develop. Philadelphia [continue reading…]