Inside the first floor of a row home on 28th and Diamond streets sits the Strawberry Mansion Community Development Corp. (SMCDC) Splashed across the orange and cream walls are newspaper clippings and building plans. Papers fly in and out of the copy machine as people move swiftly about.

This group of residents, according to SMCDC president Tonnetta Graham (above), is out to prove to developers that this community has a plan and will not have the construction of their area planned for them by others.

Formed in 2006, the SMCDC’s official mission is to promote sustainable revitalization in its community through commercial, residential and economic development. It gets involved in neighborhood development projects and ensures that community voices are heard as development interest builds.

The SMCDC also participates in community outreach programming with its partner organization, the Neighborhood Action Center. Their most prominent event? Strawberry Mansion Day.

“We thought we would have more impact by coming together and maybe showing that the community is at the table with this process of revitalization in the neighborhood,” said Graham.

A larger portion of the projects that pique the interest of the SMCDC involve cultivating homeownership in the area. It has consulted on three homeownership builds thus far. A past successful project, “The Strawberry Mansion Homeownership Project,” involved the construction of 11 affordable homes at 32nd Street and Cecil B. Moore Avenue. According to Graham, every home sold.

“We are still like a small CDC as compared to a large one that has been around a long time – we are kind of like a baby in the CDC arena, you know – but we were able to partner with Community Ventures to do the project,” Graham said.

Community Ventures, a nonprofit building developer, spoke highly of working with the SMCDC on this project and described the organization as capable and involved in the entire process. Graham explained that the money for the project was provided by the Philadelphia Housing Authority. 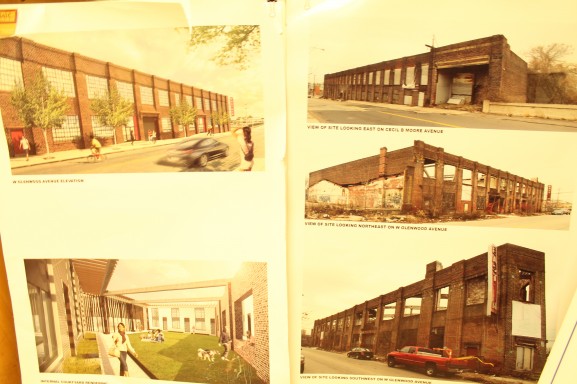 “They had priorities,” said David LaFontaine, the executive director of Community Ventures. “They wanted houses that fit in, but they were pretty consistent with our priorities as well.”

“It was a learning experience for us. We were able to build our capacity and learn more about developing units from the ground up, so that was really successful,” said Graham.

Graham said when consulting on any development projects, the SMCDC pushed for community residents to be hired for the construction work and to be given priority when the homes were put up for sale.

An ultimate goal of the SMCDC is to have the ability to complete development projects on its own without the need to partner with other organizations. The CDC wants to be the nonprofit developer of Strawberry Mansion.

The SMCDC also jumped into commercial developments in the area, such as the bus barn on 33rd and Dauphin streets, as well as the Sedgley Plaza shopping center.

“The mall (Sedgley Paza) was something that we were able to promote, and it helps attract more businesses to our area,” said Graham.

The SMCDC displayed such community concern in its involvement with commercial development projects that it has now had the opportunity to advise other groups about the process and empowerment.

“We are growing as a CDC,” said Graham. “We are learning and we are willing to spread that knowledge around, and we know how important it is to let our residents know that some things are not totally done. Even though it looks like it’s in the plans, that they do still have a say in how things can be taken care of in their community.”

Even though the SMCDC now advises others, it hasn’t stopped improving from within. The group is currently working to better its communication with community members, particularly the youth of the neighborhood.

“We have a website and we got a grant from the Preservation Alliance to do that website, so we are trying to build on our social and Internet exposure so that if people in our community can’t come to our office, they at least can keep tabs on what’s happening,” explained Graham.

Local residents like Sylvester Hampton also work with the SMCDC to promote upcoming projects and events held by the Neighborhood Action Center.

“They have educated the people in things,” Hampton said of the SMCDC. “They let them know what they need to know – how they can participate, how they can be more active and pro-active and responsible and lead better lives in the community.”

Fellow resident Naqiyb Lee said that although he does not know much about how the SMCDC operates, he does want to visit the office and see how he can be involved.

“They seem like they really got it down,” he said.

The SMCDC has a variety of housing projects on the horizon that it will be consulting on, such as the interest of another developer to convert a building at 31st Street and Cecil B. Moore Avenue into luxury apartments.

“Sometimes it’s not easy [for residents], but we want them to know that our neighborhood is targeted for change,” Graham said. “And change is OK as long as it’s managed in a way that everybody can benefit from it.”

– Text, images and video by Cindy Stansbury and Lizzy O’Laughlin

Everyone loves a freshly-manicured lawn. Cutting it, however, can be problematic if you live in Greater Grays Ferry Estates. Neighbors are pitted against one another in a dispute over who should cut the grass in [continue reading…]

https://vimeo.com/31937924] Betsy Esteves was surprised to see the empty lot next to her home on North Third Street–a lot she fenced off, planted grass on, did some minor gardening in and has been struggling to [continue reading…]