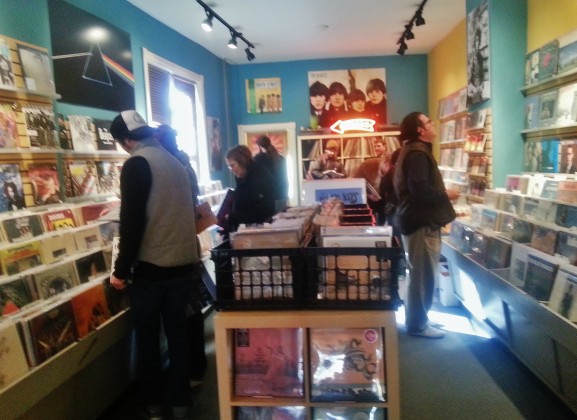 Almost every shop has specials on the consumer-driven holiday of Black Friday. However, Chestnut Hill’s independent record store, Hideaway Music, took part in quite a unique day.

Owner Brian Reisman said Hideaway Music had albums from The Grateful Dead, The Doors and Billy Bragg and Wilco to name a few. Reisman said he was pleased by the results of the day as many customers came out to shop. For most patrons, the appeal was in the exclusive albums but also the sentimental value of the records.

“[Vinyl records] are what I grew up with,” said customer Seth Turner. “They just have a nice warm sound. Mp3’s are just files. I want a piece of music.”

Another nostalgic customer, Steve Heller Burnholme, said, “I remember stealing my brother’s albums. I grew up with it. They’re familiar.”

Hideaway Music was able to provide rare deals and some reminiscent times just in time for the holiday season. Customers can look forward to the seventh annual Record Store Day coming April 2014.

The Philadelphia Flower Show returned last weekend, giving a glimpse of spring amid an elongated winter. This year the theme for the show is “ARTiculture,” alluding to a mixture of art and horticulture. Exhibition designers [continue reading…]