Geeklist recently hosted its fifth annual worldwide civic hackathon in the #hack4good series. The group of Philadelphia hackers gathered at Impact Hub in West Kensington to participate in this event occurring simultaneously in over 50 cities around the world.

#hack4good brings together software engineers, designers and entrepreneurs from all over the world to present working digital applications intended to help unite diverse communities and empower disadvantaged people through technology. #hack4good is supported by several big-name sponsors including Google, Rackspace and Joyent.

The hackathon ran continuously for 48 hours in each time zone (cities in Europe, for example, wrapped up before Philadelphia). According to Jedidiah Weller, Geeklist’s Director of Operations and the Philadelphia hackathon’s lead organizer, more than 2,500 people contributed to #hack4good in 50 cities worldwide.

Philadelphia participants began working on their projects at around 7 p.m. EST on Friday, February 7, with some working through both Friday and Saturday nights, fueled by beer and energy drinks. The code cutoff time was 5 p.m. EST on Sunday, followed by presentations and eventually the informal local judging. 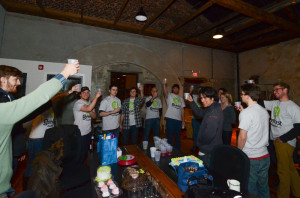 The three winning projects from #hack4good’s local competitions continued on to the global finalists competition, where the best three worldwide were chosen by a judge panel of numerous developers and executives of tech companies.

Geeklist operated a global screencast through the social video broadcasting platform Spreecast, bringing #hack4good groups together as the projects were presented and local winners were chosen.

Here are some notable projects from the Philadelphia hackathon:

RTQ-Lit (pronounced like “articulate”) is designed to help people with speech impediments improve their communication skills through sets of exercises with their mobile device. Users of the app will be able to analyze their speech by recording their voice, then compare the differences between their voice’s waveform visualization and the waveform of the app developer’s commonly accepted pronunciation.

Steve Bergey, one of RTQ-Lit’s developers, hopes that with continued development, the app will not only help people correct their speech impediments, but it will also help those users identify which areas they need improvement in and connect them with local speech therapists. Bergey would also like to advance RTQ-Lit by expanding it to foreign languages, with the idea that the waveform visualization will help a user know what phrases to stress, and how consonants should be formed.

PurpleMarker is a fork (a modified version) of the Sunlight Congressional Districts module for the Drupal content management system, developed for the Philadelphia-based National Housing Resource Center (NHRC). The original Drupal module makes it easier to display information about current members of Congress by leveraging data from the Sunlight Congress API.

Using the original module alone would provide the NHRC with quicker and more transparent communication with their representatives, allowing it to focus on lobbying. The PurpleMarker fork adds the additional functionality of looking up the congressional districts of sponsors of a given bill. This will allow NHRC to get more relevant information about the issues it’s lobbying for.

This crowdsourcing food app is similar to Yelp except its mission is more specifically focused on helping people find lesser-known affordable and healthy food options around the city, ranging from local grocery stores, food trucks, roadside vendors, or farmers markets. Users of Kitchen Cred will be able to upvote or downvote locations based on their credibility. By adding locations that are continually upvoted or downvoted, users will also receive points.

Stephanie Koenig, 36, moved to the East Kensington area with her husband, Lewis Colburn, in 2009. The couple, both sculptors who found studio space in Philadelphia, bought a house across the street from Letterly Green, […]

Christopher Munden, 39, an expat from the U.K., has worn many hats in his life. He has been everything from a ski instructor to the editor-in-chief of the independent theater and arts website Phindie. Today, […]