9th and Spring Garden sits on the edge of an area with various names: Callowhill, West Poplar, Chinatown North, or even the Loft District. The Philadelphia arts community; however, affectionately refers to the post-industrial section as Eraserhood—named after David Lynch’s 1977 horror flick Eraserhead. More than thirty years after the movie first inspired Philadelphians to explore the unrecognized concrete jungle of their city, now the film’s cult following has grown up to shape the area into a pop culture gem. With a gun range, Venezuelan restaurant, party boutique, bike shop, and potential BYOB café, 9th and Spring Garden offers a variety of resources to fit the City of Brotherly Love’s diverse needs.

Ivory Norpreneur, owner of Norpreneur Party and Event Planning, graduated from Temple University with a degree in psychology. Although she spends more time making clients’ dreams come true rather than analyzing their deeper meanings, Norpreneur still achieves her longtime goal for studying Freud and his contemporaries.

“My initial intent was to help people,” Norpreneur said. “I wanted to help people understand themselves and be happy with who they are. Now with my event planning, I can still put a smile on their faces.”

Norpreneur started event planning in 2008 after her refusal to throw the standard bowling and pool parties gained the attention of fellow parents.

“I would decorate for my daughters’ parties with creative themes like royalty,” Norpreneur said. “Other parents loved it and asked why I don’t take it a little more seriously. So I made up some business cards and flyers, and eventually it just spiraled to me hosting events every week.”

“Creating is my therapy,” Norpreneur said. “I like to take people to a whole new world full of magic.”

Norpreneur also hosts baby showers, corporate events, school reunions, anniversaries, and “anything you desire.” Props such as thrones and clothing accessories can be rented for $60.

While Norpreneur says business is strong, she believes the location ultimately hinders expansion.

“Honestly, customers who find me online are deterred to come in because there’s nowhere to park,” Norpreneur said. “We get plenty of foot traffic, but some people might be intimidated because it’s so small of a boutique. Word of mouth is the heart of my business, and that’s okay because that’s how I started.” 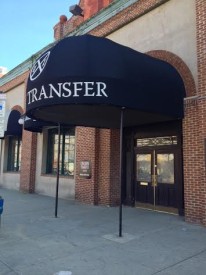 Across the street stands one of the city’s most popular concert venues: Union Transfer. Showcasing indie rock, electronic dance, and hip hop performers, the gigantic music hall opened its doors in 2011 under new owners R5 Productions, The Bowery Presents and Four Corners Management.

Originally built in 1889 as the Spring Garden Farmer’s Market, the structure converted into the Union Transfer Baggage Express Company in 1989, but to this day maintains the inaugural signage carved from its opening day. In 1942, the baggage company ceased operations and the building transformed into a boxing arena, trust company, auto repair shop, and most recently, a Spaghetti Warehouse.

“You can see this neighborhood burgeoning into an arts and entertainment hotbed,” Hexter said. “We’re still one of the only businesses open in the area around 9 at night, but I think you can [attribute] other businesses sprouting up to the attention we’ve brought to the area.”

Disagreeing with Norpreneur’s claim of the location preventing growth, Hexter argues the parking inconvenience is a trade-off for accessible public transportation.

“We’re close to the Broad Street line, close to the Spring Garden stop for the El, and walkable from Market East,” Hexter said. “And we’re conscious of the foot traffic—we send a cleaning crew around the street after each show. We don’t want to contribute to Philly’s trash problem.” 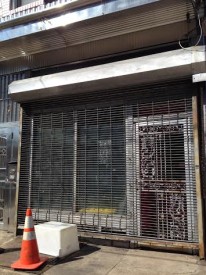 Future BYOB cafe next to Firth and Wilson Bike Shop

Will Higgins, a resident of bordering Percy Street, has only lived near 9th and Spring Garden for about a year, but enjoys the recreational opportunities the block provides.

“I eat at Sazon a couple times a week, and I’ve been to the Transfer a few times,” Higgins said. “The nice thing is that yeah, there’s plenty to check out, but it doesn’t get too busy around here. Even with the concerts, we don’t have many drunks messing up the property.”

All text, videos and images created by Emily O’Neill and John Corrigan

After graduating from Temple University in 2008 with a degree in music, Joe Primavera taught private guitar and piano lessons throughout Philadelphia and parts of New Jersey. Shortly thereafter, he founded Philly Music Lessons, working out of [continue reading…]