After a career in the Air Force as a computer-graphic assistant specialist and a tour of duty in Iraq with the Army National Guard, Sylvester Mobley came back to a city where kids were leaving school without the technological abilities to succeed in the workplace. He recognized a chance to use the skills he learned in the military to reach this disadvantaged population.

He launched Coded by Kids, a free program that teaches inner-city kids website coding and helps them improve their general computer skills.

“I really felt that the opportunity for inner-city youth to learn web development and programming was being lost,” Mobley said.

Computer literacy is a growing problem in Philadelphia and not just among kids, but adults as well. In 2013, the Mayor’s Commission on Literacy found that 43 percent of Philadelphia residents do not have Internet access in their homes and over 65% of working adults lack essential technology skills that are expected in most job settings.

Mobley believes that getting kids educated and interested in HTML coding from an early age is key to addressing this concern.

“In today’s society, if you are not literate with computers, you will be severely limited by the job opportunities you have access to,” Mobley said. “By teaching children web development and coding, I’m able to take children from these inner-city communities, and give them the skills to prepare them for the opportunities that are available.”

Mobley knows that the biggest challenge he faces is just getting kids in the door. But week after week he is impressed by the rapid improvement of the kids who do show up, like brothers Ishmil and Dante Selby from the Independence Charter School in Center City.

Ishmil is particularly enthusiastic about his website, since he can focus it on something he is passionate about: sports. 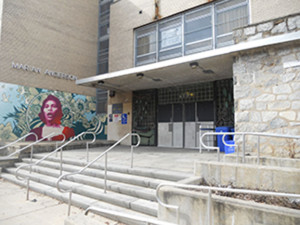 “Some parts can be frustrating,” Ishmil said, “but it’s really fun and it also helps me learn how to type.”

Although his program is focused on coding and website development right now, Mobley would eventually like to partner with IT companies in the future to improve job placement among high school graduates. But he knows that it’s a positive step just to see kids spending time during their weekends learning a new skill.

“And even if they decide that coding/web designing isn’t something they want to do, at least they learned something,” Mobley said. “Their problem solving skills have improved.”

Coded by Kids is held every Saturday from 10:00am to 11:00am at the Marian Anderson Recreation Center on 17th and Fitzwater St.

This past weekend Podcamp Philly hosted its fifth annual convention in the Tuttleman Learning Center at Temple University and while the name of the event implies a focus on podcasting, this year there was a […]

In response to the present economy and lack of traditional jobs upon graduation, more students are turning toward entrepreneurial endeavors, creating their own startups and, in turn, careers they can continue after graduation. With more […]

The Foodery, a craft beer bottle shop located in Northern Liberties is one place in the city that is set for Philly Beer Week. The celebration lasts 10 days, starting last Friday and running to […]