Mantua’s own rap icon Vinte Clemmons saw a need in his community for a mentorship program. Clemmons, 26, who was born and raised in the West Philadelphia community was tired of seeing kids younger than he was get caught up with the wrong crowd, so he took it upon himself to create Da Bottom 4.

“A lot of familes don’t have something like this,” said Clemmons. “It’s a lot of young mothers or fathers who have a lot of responsibilities. We offer a good place where people can pursue positive outlets instead of negative ones.”

Offering sports and artistic programs, like basketball, music production and freestyle hip-hop, Da Bottom 4 has a strong integration with the three recreation centers in Mantua. Although Clemmons has faced adversity about the name he feels that he could take the name and rebrand and remarket it. 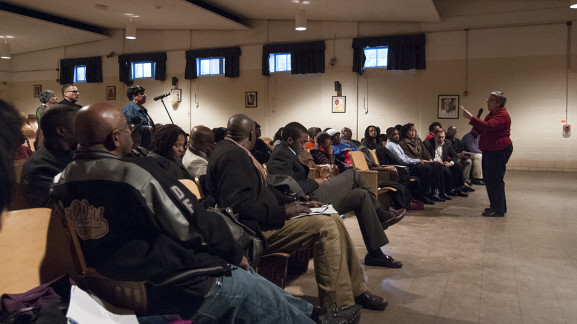 Holding the position of executive director of the Mayor’s Office of Community Empowerment and Opportunity, Eva Gladstein knows a few things about promoting a community that has seen its fair share of obstacles. One of the promoting members of getting Mantua considered for the federal Promise Zone initiative, Gladstein described what the neighborhood is going to have to do to make Mantua a better place to live.

“Mantua was the only community that was eligible to recieve the designation,” Gladstein said. “This was due to all the work that has been done in Mantua. The only way that this is going to work is to get leaders together and take responsibility for [the] community.”

Gladstein helps lead the charge and get the federal agencies that help with designated promised zones into Mantua and have them help the residents with making changes that reflect the goals laid out in the Mantua Transformation Plan.

The Promise Zones Initiative was one of the best things that could have happened to one of the most historically poor neighborhoods in Philadelphia. Although it was a great push forward, the designation came with no promised financial backing from Washington. The way that Mantua is going to raise money is through Andrew Frishkoff. Executive director of the Philadelphia Local Initiatives Support Corporation (LISC), Frishkoff not only has a long list of experience with raising money, he has previously served in leadership roles for the Housing Alliance of Pennsylvania and the Greater Philadelphia Urban Affairs Coalition.