In 2006, the Pennsylvania Gaming Control Board awarded SugarHouse Casino one of two gaming licenses for Philadelphia. SugarHouse, along with the now-defunct Foxwoods casino proposal in South Philadelphia, was set to become the first casino in the city.

Originally, the casino was supposed to open along the Delaware River in 2008, but it faced backlash from anti-casino organizations and city residents. SugarHouse Casino did not open on time and failed to meet many of its projections that were included in the original proposal to the city and gaming board. With a second casino coming to Philadelphia within the next few years, the underachieving SugarHouse Casino fears that it may have to cut jobs to make up for its losses in an already saturated Pennsylvania casino market.

In the original SugarHouse proposal, the casino was supposed to have 3,000 slot machines, 40 table games, five restaurants and a 3,200-car parking garage. According to AxisPhilly, in the first year of operation, the casino was projected to bring in $320

million in total revenue, with $240 million coming from slot machines.

SugarHouse finally opened on September 23, 2010, more than two years after the projected opening date. The first casino in Philadelphia began with 1,600 slots, 40 table games and no parking garage. Eventually, the casino added 20 more table games, increasing the number to 60.

In the first year of operation, SugarHouse’s gross revenue was $212.2 million, a number significantly lower than executives had projected. A few months after opening, SugarHouse ranked last among the 10 Pennsylvania casinos at the time in gross slots revenue. Ultimately, SugarHouse ranked eighth in the state in terms of gross gambling revenue after its first year. From July 2011 to June 2012, the casino continued to struggle to meet projections by only generating $189.8 million in slot machine revenue.

More recently, SugarHouse unveiled a $155 million expansion project that will include a smaller parking garage than what was mentioned in the original proposal. Some of the other things included in the expansion are an increase to the size of the gaming room and a second-floor banquet hall with a riverside balcony. Additionally, the expansion of the gaming room would increase the number of slots to 2,100 and the number of table games to 90.

“As with any casino, SugarHouse can’t stand still with the same games, same promotions and the same food and beverage offerings and expect the same results,” said Douglas Harbach, director of communications at the Pennsylvania Gaming Control Board. “Casinos will continually look at the additions of other amenities that can give customers a reason to visit and stay longer.”

Parx Casino in Bensalem and Harrah’s Philadelphia in Chester are both within 20 miles of SugarHouse. During SugarHouse’s first two-and-a-half years of operation, Parx Casino generated approximately $885 million in total revenue, more than double the amount of revenue that SugarHouse generated. In 2013, Parx pulled in $368.4 million in slot revenue, compared to SugarHouse’s $180.7 million. Harrah’s Philadelphia actually saw a 10 percent decrease in slot revenue in 2013, but still managed to bring in $233.8 million from slot machines. Both Parx and Harrah’s have significantly more slot machines than SugarHouse.

“A number of reasons [contribute to the decline in slot revenue],” said Harbach. “More out-of-state competition with new casinos offered in Maryland and Ohio, along with enhanced marketing by those bordering states that have offered casinos for many years [New Jersey, Delaware and West Virginia].”

When comparing SugarHouse to Parx and Harrah’s Philadelphia in terms of table-game revenue, the casino has fared nicely. From July 2012 to June 2013, SugarHouse’s gross revenue from table games amounted to $85.3 million. In that same time period, Harrah’s Philadelphia, despite having more than twice as many average table games, only generated $80.3 million. On average, Parx Casino had 166 table games during that time period, which enabled them to bring in $110.3 million in gross revenue from table games. 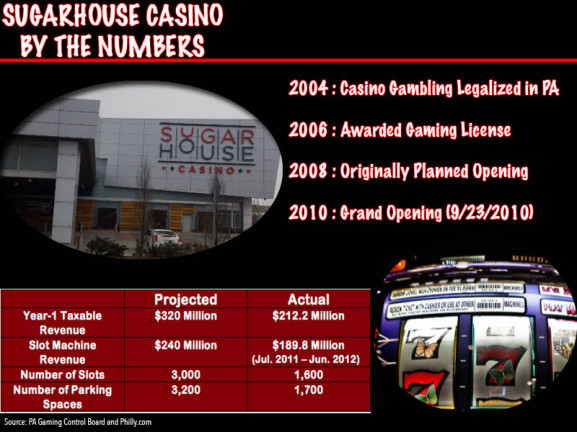 “I prefer SugarHouse over Parx because of their free play benefits and rewards program,” said Mike Boyles, a SugarHouse Rush Rewards member. “But they could do a better job with promotional offers and stuff like that.”

even more. Projections released by members of the Provence team, a casino and resort proposed along Callowhill Street in North Philadelphia, revealed that half of the expected revenue from slot machines and table games would be from new customers. That means that the other half would come from money that would have probably been spent at other nearby casinos. Casino Revolution, proposed for the warehouse district in South Philadelphia, projected that a South Philly casino would take approximately $185 million in revenue from nearby casinos in the first year.

“When you have a new restaurant that comes in, a new hotel that comes in, the other ones do suffer for a short time because everybody wants to see the new casino,” said Philadelphia Councilman Mark Squilla in a recent interview. “But I think the market is big enough for a second casino.”

Long before construction crews broke ground at SugarHouse Casino, owner Neil Bluhm met with members of the community to sign a community benefits agreement that would allot funds back into the surrounding neighborhoods of Fishtown, [continue reading…]

Strawberry Mansion: For One Urban Rider, Growing Up Was Just Something Different

The Fletcher Street stables are home. At least that’s how Jamil Prattis describes them. Prattis, 29, has been coming to Fletcher Street since he was 11 when his cousin taught him to ride. His first [continue reading…]

Casinos: SugarHouse Gives Back To Community

As part of the Community Benefits Agreement with SugarHouse Casino, the Penn Treaty Special Services District has received $500,000 per year from SugarHouse since opening in 2010. Once SugarHouse’s second phase is finished, presumably bringing [continue reading…]