What is the Delaware Extension Avenue Project?

According to residents of Bridesburg, something that will better the community as a whole.

The extension plan was first initiated by former congressman Bob Borski, who created the Delaware River City Corporation in 2004. They had planned to extend Delaware Avenue to Bridge Street initially.

According to the Philadelphia Department of Streets, the Delaware Avenue Extension Project will not only allow for easier access to the Delaware River waterfront but will also reduce truck traffic on the streets of Bridesburg.

Resident Diane Malone, as well as others are extremely happy about the changes to come.

“I’m all for it,” Malone explained. “I live right on Richmond Street where trucks drive by and constantly knock down my cable lines. It’s a hassle having to get Verizon or Comcast to come out to fix them, so hopefully with the extension of the road that will no longer be an issue.”

Many Bridesburg organizations, such as the Bridesburg Business Assocation and the Bridesburg Community Development Corporation, have been involved in this project. Buckley & Company, which was established in 1928, is the construction company being used to orchestrate this project. The contract, worth approximately $11.2 million, is being funded through the City of Philadelphia as well as federal funds, via agencies like the Federal Highway Administration.

Helen Anderson, editor of the Bridesburg Bulletin as well as a BCDC board member, explained earlier this month at the Bridesburg Historical Society meeting why there’s been such a delay in getting this started.

“The extension is something that’s been talked about for years,” she said. “It’s been an off-and-on again project for awhile now. There were problems with the budget for the city. That’s a major reason why it hasn’t happened until now.”

Many still seem uncertain as to whether or not the extension will be completed within its projected time.

“I hope it happens,” said an uncertain Matt Lowery. “I feel like it would be great. I know that they’ve broken ground and that within two years everything should be done. But who really knows?” 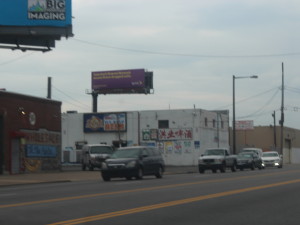 Lowery, who has lived in the Bridesburg for the last twelve years, remembers when the project was first initiated.

“I was really thrilled when I first heard about it,” Lowry continued. “I thought that it would be beneficial for the city and I still feel that way.”

Jason Newman, the program director at the Bridesburg Boys and Girls Club, says that he doesn’t know too much about what’s going on.

“I’ve heard about it, yes,” he said. “But that’s about it. I feel like everyone’s main concern is the traffic congestion. I don’t think anyone really knows too much about it though. We’re all just waiting to see what happens.”

The Bridesburg community is in the midst of a major change. The Philadelphia Department of Streets has embarked on the first new major road creation in more than a decade – the extension of Delaware […]

The Bridesburg community is full of residents working not only to make ends meet, but to also better their neighborhood. From the members of the Bridesburg Community Development Corporation to the volunteers at the Bridesburg […]

There has been an ongoing problem in Bridesburg with traffic for as long as people can remember, especially with trucks and buses because of the depots on Orthodox Street. In recent years, it has gotten […]