Every year, on the first Saturday of October, Germantown has one of its biggest events – a reenactment of the famous Battle of Germantown on the very grounds the battle took place 237 years ago.

“It’s a huge event,” said education director of the Cliveden origination, Carolyn Wallace. “People come from all over the tri-state area to see it, thousands of thousands of people. Last year I think we had more than six thousand attend. It’s a busy day.”

Though the first Saturday of October remains the foremost day of the year for the site, the house and grounds of then Supreme Court Chief Justice Benjamin Chew (where the battle was fought) remains open to the public throughout the rest of the year, preserved by the Cliveden organization. 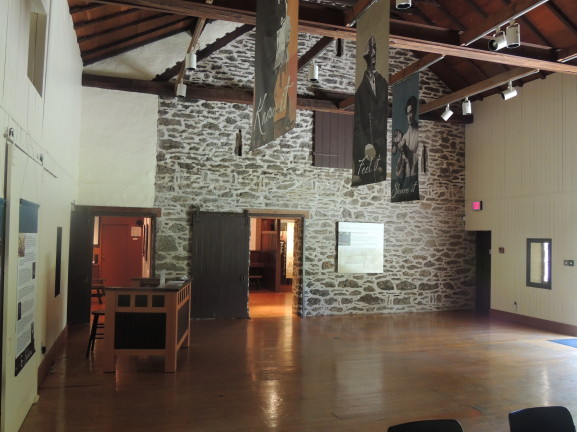 “I love coming through here,” said history enthusiast Jimmy Sheeran. “I’ve been to the reenactment before and that’s awesome. But I like just coming here when it’s not crowded and walk through the grounds. It’s cool to me that I’m standing on the grass where American and British Soldiers died.”

The Battle of Germantown happened Oct. 4, 1777. At this point the British occupied Philadelphia. On the morning of Oct. 4, Washington sent four columns of troops with the intent of getting the British out. The British were encamped around the abandoned Chew Mansion.

“They ended up going into the house and using it as a fortress,” said Wallace. “The walls are 23 inches thick made of Wissahickon schist, so cannonballs don’t penetrate particularly well. It made for an ideal defense.”

The Colonials initially pushed through British lines but were unable to get through the defenses of the British encampment of the Chew Mansion, resulting in an American defeat.

Though resulting in defeat, the Battle of Germantown marked a key turning point in changing the tide of the Revolutionary War.

“[The Battle of Germantown] did result in an American defeat,” said Wallace. “But because the Americans fought so valiantly here, this helped bring in French support. Even though it wasn’t a victory for the patriot cause, it did help us bring in the support that helped us win the war.”

For this year’s reenactment of the battle, the Cliveden Organization is already predicting a very large turnout. According to Wallace, more than 200 reenactors are expected to come, and the surrounding blocks of Germantown Avenue are to be blocked off for the event.

“But it’s important to have places like this open year-round, too,” said Wallace. “Especially for history geeks like myself ,so we can remember where this country was to get to where we are now.”

–Text and images by John Henry and Sam Matthews.

It’s a little after 5:30 on a Friday evening, and the teens are anxiously waiting for ballet class. Before lacing up their pointe shoes, they run through an intense warm-up routine, meticulously extending their limbs [Read More]

Wynnefield: How One Woman Works To End Gun Violence

Movita Johnson-Harrell provides knowledge on how she takes the time to help individuals in her community while trying to make a difference. [Read More]