Arik Victor of Creep Records (pictured above) had a simple ambition when it came to his Northern Liberties storefront.

“I wanted to own a record store I’d want to hang out in,” said Victor.

Located in The Piazza At Schmidts, Victor’s Creep Records may have have accomplished precisely that.

The front of his store houses a wide array of punk and hardcore records but a few steps further behind a set of saloon doors is a fully stocked head shop. Custom pieces from local brands such as Illadelph and Pyrology fill the shelves and disc golf discs hang from the walls.

Surprisingly, thus far the upper class Piazza in Northern Liberties has proven to be a perfect home for Victor’s vision.

According to Philadelphia Magazine, from 1999 to 2011, Northern Liberties experienced a 113.5 percent growth in median income. Unsurprisingly, a surplus of businesses sprung up around this economic growth, including The Piazza, which opened in 2009.

Trendy eateries and boutique shops quickly filled up storefronts in The Piazza but alongside them was the second iteration of Creep Records (the first was located in West Chester and was open from 1999 to 2002). Although one may think Victor’s head shop/record store would be somewhat of a strange bedfellow to the rest of the Piazza’s occupants, Victor feels like he fits right in. He accounts this to the neighborhood’s general acceptance of the arts.

“Art culture is very broad as far as age goes,” said Victor. “You also have to remember that this neighborhood. The Piazza area is very loud. They regularly have 4,000 or 5,000 people here. If our store is loud and the doors are open, they kind of embrace that.”

Creep Records originally grew out of Victor’s desire for teenage rebellion. Victor wanted to press his cantankerous brand of punk to wax and decided to do it himself.  His next move was to move into a house with a rag tag group of pals—in a move that he said was inspired by the Washington D.C punk record label Dischord. Victor then began to run a hodge-podge music collective. Part recording studio, part record label, Creep Records pressed the recordings of Victor’s bands, as well as other punk and alternative acts (notable Creep artists include the destructive Eat the Turnbuckle and Bad Luck 13).

“We were mostly into current punk rock stuff,” said Victor, referring to the formation of the label. “It was also when Green Day was getting really popular. It was just at the right time for an independent label to get accepted.”

The storefront, as well as the element of the head shop, were later developments. In 2003, Victor teamed with Mark Tawney, a long time fan of the label who had a strong affinity for custom glass pieces, to open the store. While they’re both hobbies of his, Victor believes that glassware and records share a common convergence.

During their five years at The Piazza, Victor’s juxtaposition of glass and wax has thrived. Earlier in April, Creep Records expanded. A back area devoted entirely to glass and disc golf was added and a front entrance facing the Piazza was installed. Victor hopes that the arrangement could introduce glass shoppers to the world of record collecting.

“You’d be surprised how many people might just be like, ‘This is my favorite album.’ I don’t even have a turntable but I want this album,” said Victor. “They buy the album and then all of a sudden they’re like, ‘I kind of wanna buy more records.’ And they buy more records and they’re like, ‘I gotta buy a turntable’ and now we have a box of turntables coming in.’ It’s a cool trend.”

A final feather in the cap of Creep Records is their support of the local glassblowing scene. A piece published earlier this year on philly.com called Philadelphia a leader in the national glassblowing movement. Creep Records were early supporters of several Philly glass blowers who recently hit it big, including Illadelph and JAG. 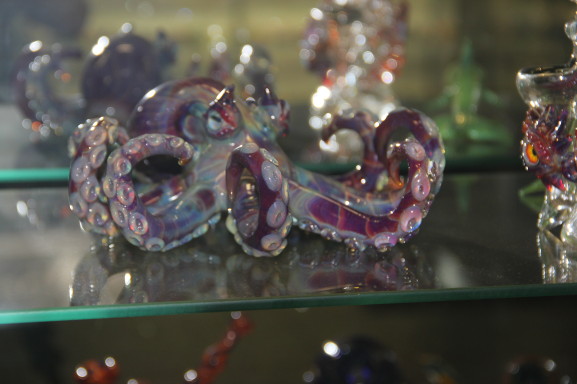 “There’s a whole glass movement in Philly, and basically in the world,” said Victor. “But it’s very much like the way a band would start. A bunch of friends collaborating with music, collaborating with glass. So when I got introduced to that world a little over ten years ago it blew my mind. Because it was like, oh this is like the same as having a band. So we relate to that.”

As more people partake in different health and fitness trends, it stands as no shock fitness studios in Philadelphia are looking for different ways to spice up a work out. Those who find running on [continue reading…]