The North Region Warriors battled their way through the rain during a recent football practice at Ziggler Field across from Grover Washington Middle School. The gloomy weather neither stopped Head Coach Robert Tate (above) from teaching in the classroom, nor on the field.

While players of a football team should progress athletically through a season, Tate expects his players to gain academic strength as well. To the head coach, academics takes precedence over everything else. 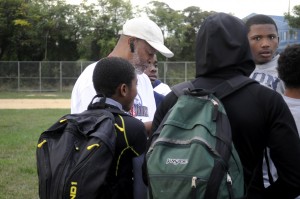 The players must maintain regular attendance and good academic standing, meaning they need to sustain a C or higher in their four core classes. The Pennsylvania Interscholastic Athletic Association initially instituted the academic regulations, and Tate strictly and seriously enforces them.

Tate’s two assistant coaches agree with his attitude towards education and verify how it helps to ensure the success of the students inside the classroom.

“It’s rewarding to see them grow not only athletically, but seeing them get that piece of paper,” Assistant Coach Phillip Aiken said.

Failure to adhere to the rules prohibits players from playing in games. The students must achieve and maintain good academic standing for two weeks before they are eligible to play in games again. Kate Leader, the other assistant coach, was essentially hired to monitor the students’ academic progress.

“If you want to know the real tip, you have to be connected to that teacher,” Tate said, “the ones [who] teach those youngsters on the team and who keep you abreast to their behavior as well as their academic performance.” 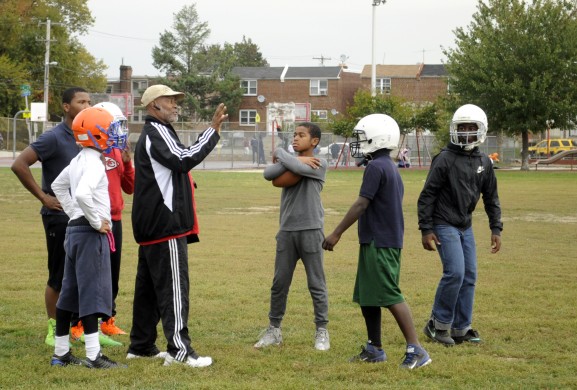 Leader said while strict rules on academics certainly have an impact, she believes Tate himself influences the team in other ways.

“Probably the biggest thing [Tate] has brought to the table has been really sharing his life experience with the kids,” said Leader. “And the kids are really receptive to him because it makes him a real person.”

“Coach Tate always [reminds us that] we play as a team, it’s not individual – if one shines, we all shine,” player Quadir Phillips said. 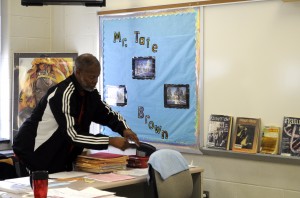 The Middle Grades Football league, also known as the Middle Years Program, has 10 teams, each pulling players from the middle schools within each region of Philadelphia.

The Warriors’ head coach has been in the school district for 20 years, the last 10 spent as a coach on the team, as well as a teacher at Grover Washington Middle School. He started on the team as an assistant coach when the Philadelphia Middle Grades Football league began in 2004. He then took over as head coach in 2009, leading the team to win the championship.

Before then, aspiring middle school football players had to play for non-scholastic Pop Warner leagues.

Now, people like Tate and his assistants aim to turn football into more than just a sport. Their efforts could end up helping to improve the city’s graduation rate.

The sun gleamed over the tall, white wall looming next to the coarse and patchy field by the El stop at the corner of Front and Berks streets. It wasn’t long ago that the turf [continue reading…]

With all the negative attention education in Philadelphia receives, the community forgets about the different opportunities laced throughout the city. While there are endless programs serving the area’s youth, there are an abundance of classes [continue reading…]

As the school year is coming to an end and the weather outside is getting warmer and warmer, many restless high school students cannot wait until the school day is over. In West Philadelphia, this [continue reading…]