What was intended as a quick errand to Home Depot turned into a nightmare for new Philadelphia resident, JJ Pierce.

Leaving the store, she realized her red Honda-CRV was no longer in the parking lot, and Louie, her mixed black labrador, was inside the car.

Around 8 p.m. on Oct. 9, Pierce went to the Home Depot on South Christopher Columbus Boulevard for a set of spare keys. Flying to Colorado the following morning for a family reunion, the keys were for the dog sitter planning on watching Louie.

Pierce decided to bring two-year-old Louie with her to Home Depot because of his love of car rides. After not seeing Louie all day, Pierce said she thought it would have been fine for him to come along for the short trip.

“Turns out to be the worst decision I’ve ever made,” Pierce said. “Assuming I get him back, obviously, I will never do it again.”

Her car was found on North Darien Street in North Philadelphia on Oct. 14 with Louie’s collar inside. Police returned the collar to Pierce covered in fingerprint dusting, as pictured above. The catalytic converter, battery and radio were stolen from the car. Pierce said Louie will either be wearing a red harness or, most likely, nothing.

Pierce remembers Oct. 9 as a cool night, and she slightly cracked the windows and locked the doors of her Honda. She was parked near the front of the store, in the area shown below. 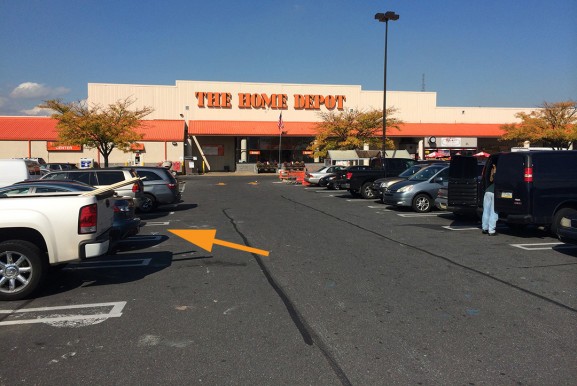 “There weren’t very many cars in the lot,” Pierce said. “But I figured, I have to be an idiot right now because there is no way that someone could steal my car in five minutes.” Security footage from Home Depot showed Pierce wandering the lot for at least five minutes. It was after that time that Pierce finally accepted the fact that her car was gone.

Pierce initially spoke to an employee about her situation. The manager on duty then urged her to call police, which was when she emotionally broke down. Other shoppers approached Pierce to check on her as she stood crying, waiting for police.

“I was just thinking completely irrationally,” Pierce said. “It did not make sense, and it still doesn’t.”

A majority of the security tape was too difficult to make out, but there was clear footage of Pierce walking around the lot. Police were eventually able to point out, what they thought was, her car pulling both in and out of the lot.

Her next phone call after contacting police was to her mother in Colorado, telling her she had to cancel her flight the next morning.

“I haven’t seen my family in a while,” Pierce said in regards to missing the reunion. “But it was just completely out of the question at that point.”

Pierce adopted Louie from a rescue a little over a year ago while living in Washington, D.C. He was malnourished and believed to have arrived from a puppy mill.

“He was scared to death of everything,” Pierce said. “A year or so later, he’s a completely different dog, a complete goofball.”

Working as a teacher and attending Temple University as a graduate student, searching for Louie began to take over Pierce’s schedule. After six days of searching she returned to work, but a search party was organized for last Saturday through a Facebook page she created titled, Help Louie Get Home. 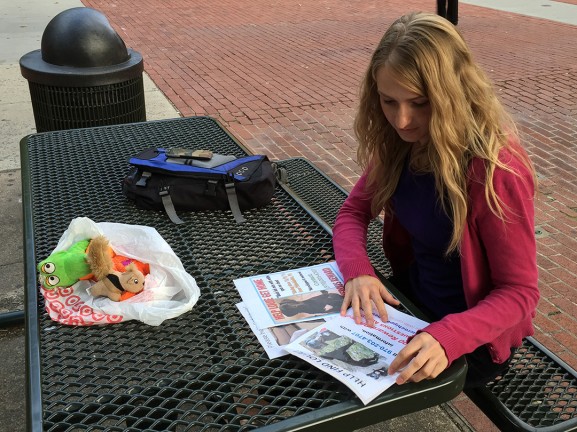 Dog owners Carey and Jeff Rhodes were two of nearly a hundred volunteers who decided to attend the search.

“Our dogs are family to us,” Carey said. “Louie is JJ’s family, and it’s not easy being without your family. Giving our time was the least we could do.”

The volunteers joined Pierce in searching North Philadelphia, asking residents and posting flyers. Many others have helped Pierce by donating money to an online fundraising website for a reward. Pierce set the maximum reward money for $3,000.

A very similar situation occurred to The New York Times bestselling author, Tricia O’Malley. Her book, “The Stolen Dog,” tells the true story of her dog taken from her deck but anonymously returned with the help of social media. O’Malley has developed a guide she shares with owners of stolen dogs.

“I did email JJ my guide,” O’Malley said. “I know how heartbreaking it is to have to wonder what happened to your pet. The what-ifs are almost worse than the reality.”

Facebook users following Pierce’s page have also been donating money for more flyers, billboards and possible detectives. Another search party has been scheduled for this Saturday.

“The fact that that many people have taken their time by donating and helping me has completely restored my faith in Philadelphia,” Pierce said. “Well almost. I still want my dog back.”

– Text and images by Alex Snell and Amanda Kim.

Any information on the whereabouts of Louie can be sent to JJ Pierce at getlouiehome@gmail.com | 970-203-4707.