As William Thompson walked toward Faith Temple recently, he greeted almost every person he passed. He grabbed each neighbor around the shoulders, squeezed them tightly and shook their hands with both of his own. 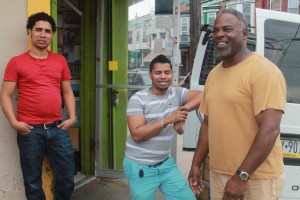 “When we went on vacation, he used to take the whole community,” said Thompson’s daughter Shevron Thompson. “But that’s just him.”

Known to most in Strawberry Mansion as “Billy,” Thompson has been a regular fixture on these streets for his entire life. He grew up in this neighborhood and raised his own 12 children here.

This neighborhood is also where Thompson serves as a deacon at Faith Temple, a Democratic committee member and the founder of the Strawberry Mansion Faith Based Coalition.

The coalition, which was first established in 2013, brings together civic and community organizations with religious leaders in order to improve the quality of life for the community.  Thompson explained that a great amount of their efforts focus on utilizing the streets for positive programming and making the area safe for the youth as well as the elderly.

“I think that’s what I love so much about him, that he has that strong ability to lead people in the right way,” said Thompson’s wife Annette (below). 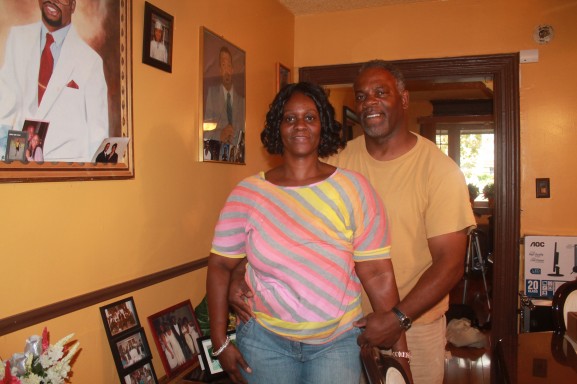 With a broad smile, Thompson explained that he and his wife have been together since they were teens.

As a teenager, Thompson wore the hat of gang member, a role he was “drafted” into when other members beat him with boards. He ran with the gang from sixth through ninth grade. By the time he reached his 10th grade year at Strawberry Mansion High School, he decided to leave the streets behind.

“We started playing football, so then that helped us go cross from different gangs, because they see that we were part of a team – then they come watch you play,” he said. “That was a part of us growing up and growing out of the gang system.”

Thompson also cited his father’s watchfulness and a desire to stay in school as additional motivation for leaving the gang.

“I just told them I was finished, and then I walked off. It was the longest walk of my life,” he explained. “When I turned the corner, I felt like I was free.” 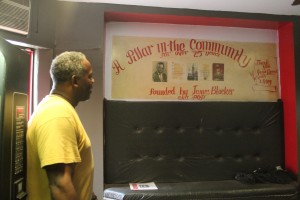 Surmounting gang life was not the only struggle that Thompson would face. His eldest son, 18-year-old William “Billy” Thompson Jr., was shot and killed on the same streets where he once ran with the gang.

“Not too long ago I heard somebody say, ‘You don’t get over it, you just get through it,’” he said solemnly. “It’s been about 15 years now since it happened, because I think my grandson is 15.”

The day that Billy Jr. was buried, Thompson’s grandson was born. He bears the name of both his father and grandfather: William Thompson III.

A year after his son passed away, Thompson’s father was killed during a robbery.

“We were back to back with my son, then my dad, so that was about the hardest time in my life,” he said.

Thompson said that throughout this difficult time, it was the church and his pastor who kept him going.

“So the spiritual side of me picked up and that changed my lifestyle slowly, real slowly, but it did change,” said Thompson.

It was his adoration for the church that inspired Thompson to create the Faith Based Coalition.

“Being that I had it all, I wanted to share my time and give it back,” he said. “So that’s when a friend and I came up with the Strawberry Mansion Faith Based Coalition.” 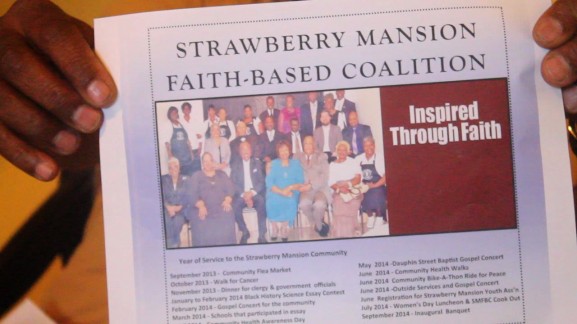 Denise Jackman has known Thompson for two years through her position as secretary for the coalition. In her mind, the work that Thompson has done for the children of the community stands out.

“In fact, we just got a permit to be in Ethel Allen and Strawberry Mansion schools to run programs in evening for the youth,” said Jackman.

Derrick Ford, self-proclaimed “mayor” of Strawberry Mansion and member of the coalition, aided Thompson in crafting its first mission statement. Ford also gave his input that the coalition should not be focused on just one faith. 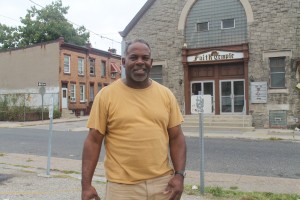 “It shouldn’t just be about Christians, but all of the meetings were at his church, and some of the agenda was all about the Christian perspective point,” Ford said.

Ford believes that Thompson took his suggestions, and said the coalition has developed to encompass more than just the Christian view.

“I think he is a guy from the community who really loves the kids and just wants to better the community,” Ford said.

“He runs like an engine,” said Jackman. “He never stops.”

Text and images by Cindy Stansbury and Lizzy O’Laughlin

In a neighborhood where the mainstream media seems to primarily report stories of violence and drugs, these individuals have made it a goal to show the city that there is more to Strawberry Mansion than the negativity [continue reading…]

Strawberry Mansion Day 2014: Not Even Rain Could Stop the Party

Residents joined together on Sept. 18 for their final community party of the summer season, the eighth annual Strawberry Mansion Day at Mander Park at 33rd and Diamond streets. Their original planned festivities, which began the [continue reading…]

Denise Jackman was an educator in Philadelphia for more than 30 years and has recently retired. She now focuses her energy on her position as treasurer for the Strawberry Mansion Faith Based Coalition, an organization geared [continue reading…]