Andrew Ha describes his relationship with music as a marriage, but it’s not his only commitment.

Like many working Americans, Ha holds regular job hours from 9 a.m. to 5 p.m.; he works for the Jewish Employment Vocational Services, or JEVS. In the evenings, armed with his cup of coffee – and the occasional glass of scotch – Ha spends his time at Repercussions Studios in Olde Kensington, a recording studio where he is the owner, musical engineer and producer.

“I have to figure out ways to make it work – if that means sleeping two hours a night and fitting in a 30-minute nap in between jobs, that’s what I do,” said Ha.

Still, in both jobs, Ha works diligently and meticulously to accomplish goals.

“I’m bringing in a client tomorrow to clean up one line before we release his song,” said Ha. “I know he’s ready to just release it, but I’d rather him create the complete, perfect package of a song.” 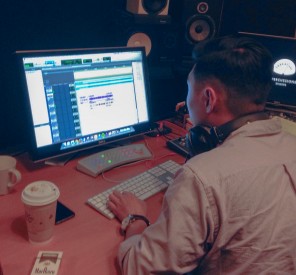 At JEVS, Ha works for disabled welfare recipients in order to help them get – as he describes it – “on the right track.” In his experiences at the recording studio and his social work, Ha sees similarities within both fields. For him, both jobs are all about creating a nurturing environment for his clients. The sense of truly helping someone and knowing that they got the best out of their situations is what Ha says drives him in both career paths.

Jeffrey Booth, the man Ha cites as one of his mentors, is the vice president of JEVS.

“Andrew has something in him that draws him toward helping others get to something they want,” said Booth. “Both jobs have that in common.”

Not only is Ha working on the balancing act of maintaining his nine-to-five duties at JEVS and owning Repercussions, he is working to combine his passions for both social work and music. Along with Booth, Ha is leading the effort to create a workshop focused on introducing recording and editing techniques to young adults.

The workshop includes educational and empowerment programs directed towards engaging participants and helping them tell their stories. The team working on developing this project includes some JEVS staff and some volunteers. Weathervane Music, a nonprofit in Philadelphia, has volunteered to help create a curriculum to assist the educators.

With all this on his plate, Ha is still able to foster good relationships with his clients at Repercussions. In the musical recording environment, he said catering and adjusting to the needs of the individual is of tremendous importance.

Dave Bak, one of Ha’s clients at Repercussions, remembers a time when Ha’s studio was being run from his bedroom. Bak said even in that stage of his business, Ha was dedicated to making sure his clients were never limited in their sessions.

“He commits himself fully and works tirelessly to bring out the best in your music,” Bak said. “He may come across as a stickler at times, but it’s great attention to detail that makes Andrew a great engineer and producer.”

Growing up in Cheltenham, a township just outside of Philadelphia, Ha has always wanted to support the city. As a child, he spent his weekends in Logan, a neighborhood in North Philadelphia, where his parents owned a grocery store. He often saw the plight of some of the people in the inner city. This led Ha to want to become a lawyer. 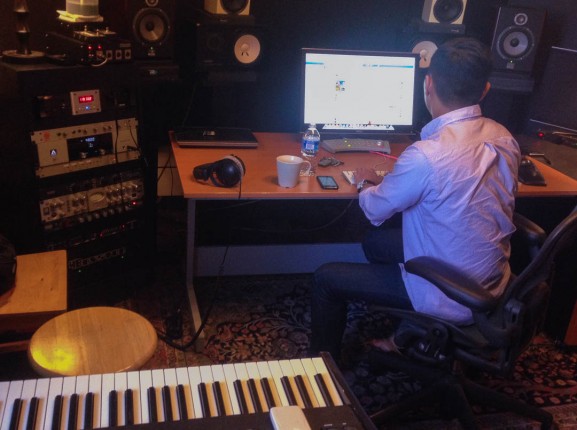 He graduated from Temple University as a criminal justice major with a plan to attend law school. In his final year of undergraduate studies, Ha even took the LSAT and did especially well on the exam. After graduating, Ha gave himself what he described as an honest self-evaluation and realized his passion and love for music was strong enough for him to pursue a career in music.

“I realized I loved music, and it wasn’t something I could just do part time,” Ha said. “As hard as I studied for the LSAT, I’ve been studying music like that religiously for the last seven years.”

His work in developing his craft doesn’t go unnoticed. It is Ha’s dedication that makes him a special engineer, according to client and friend Danny Chung.

“Andrew is dedicated and invested in his work, maybe even to a fault,” Chung said. “He has a real passion in what his stuff sounds like and can be stubborn in the direction he wants to go. But that is so much better than having an engineer that is indifferent – indifference is the main ingredient in mediocrity, and that’s a dish Andrew doesn’t like the taste of.”

That distaste for mediocrity is a sentiment Ha wanted to make sure he conveyed.

“That’s my mentality with everything in life: to not settle for less, but to always be seeking excellence in everything you do,” Ha said.

Becky Bannan is a senior at Little Flowers Catholic High School for Girls. A seemingly well-balanced student, Bannan said she finds solace in a sport that is not typically seen in the city: lacrosse. Lacrosse [continue reading…]

Mill Creek: Building And Serving The Community Through Art

Every Saturday this past October, children and residents have gathered at the Mill Creek Recreation Center, 4700 Brown St., for art classes hosted by the community group Fine Art Through Our Eyes (FATOE). The classes run through [continue reading…]