On the corner of 33rd and Diamond streets recently, five residents gathered around a canopy tent, each eagerly awaiting their turn to purchase some of the fresh fruits and vegetables arranged on the table. Although it’s no new endeavor, this small produce stand has seen a few big changes this season.

Previously under the direction of an Amish family, the Food Trust-sponsored farm stand began its summer season under new management by the East Park Revitalization Alliance (EPRA,) a community nonprofit geared toward environmental improvement and health awareness within the neighborhood.

“It’s stark, the contrast between the amount of support we’ve gotten since EPRA has been involved,” said Asha Jackson, the Food Trust farm stand manager.

Jackson explained that although she did not have an exact count, she believes the farm stand under EPRA’s direction serves about 100 customers each week, whereas under the previous management it only saw about 20 or less. Jackson credits much of this increase in business to EPRA’s strong community ties.

“The other market wasn’t really thinking about their customer base and what they were eating, but EPRA has such a strong relationship with the community that they know what they like,” Jackson said. The other farm stand sold more baked goods while this one relies more heavily on fresh produce, she noted.

“They know us and they trust us,” added Suku John, the executive director of EPRA. 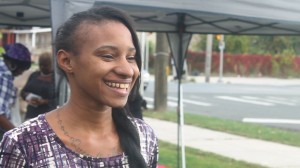 EPRA food stand worker and local resident Cassandra Asper (left) has been working with the organization since May. She said that due to word of mouth, business seems to increase every week.

“At first I was kind of nervous, because I was going to be scared to talk to people and ask them to come out and things like that, but actually it got great,” she said.

Fellow EPRA worker Staci Berry, also a local resident, said that along with working at the farm stand, she has been a customer.

“It’s important because it brings healthy fruits and vegetables into the community so that we don’t have to travel far to get any,” she said. “Usually when I was growing up we went to the market, but you know, I like the fruit stand better.”

Much of the food sold at the stand is grown by EPRA in its community gardens and the remainder is sourced through Common Market.

“There is one grocery store in the community. The produce there is not the best. I think everyone would agree with me that they don’t have a lot of produce, and when they do, it’s kind of wilted ,” said Nicole Sugerman (below,) EPRA’s food access director. “I think people really appreciate being able to buy local high quality produce right in their neighborhood.” 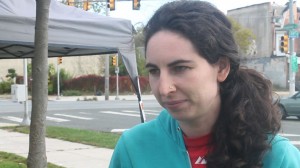 Text and images by Lizzy O’Laughlin

Strawberry Mansion Day 2014: Not Even Rain Could Stop the Party

Residents joined together on Sept. 18 for their final community party of the summer season, the eighth annual Strawberry Mansion Day at Mander Park at 33rd and Diamond streets. Their original planned festivities, which began the […]