Just above a small engraving warehouse on Frankford Avenue is a collaborative space for writers. Walls are lined with ampersand prints and paintings by local artists, while crowded bookshelves overflow with both old and new works of literary art.

The Head and the Hand Press is a functioning press that publishes work on a local and national scale for Philadelphia writers, as well as for writers from around the country.

Founded in 2012, the catalyst for the publishing company was a piece of work produced just one year prior by Nic Esposito, titled “Seeds of Dissent.” 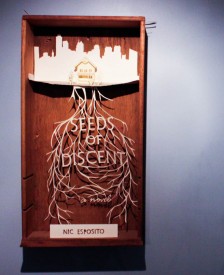 “I didn’t really want to shop around for other publishing companies,” said Esposito (pictured above), founder of the Head and the Hand Press. “I thought, instead, that it would be really great to create a company here in Philadelphia because there are a lot of great writers around here.”

The 2-year-old company is not exclusive to just working in publishing works of literature, however. There are many other aspects that create this well defined brand of a craft publishing space.

“Aside from publishing, we also have a writer’s workshop,” said Zoe Gould, Workshop Program Coordinator. “We sort of have an arm out into the community to connect writers and we really like to keep them involved in the writing process.”

Working as a resource for writers and artists in Philadelphia who are looking for a creative and collaborative space, the Head and the Hand workshop is also a way of bridging the gap for community members and writers who want to be published.

“The workshop space is also for members who aren’t looking into being published,” said Gould. “It’s for those who want to engage with other writers and want to share their work that way.” 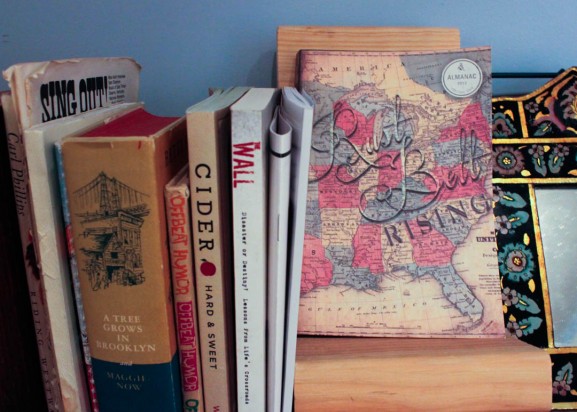 As a workshop, classes are held twice a month for members who pay a fee to be a part of the co-working space. Each month there is a different focus, such as bookmaking and bookbinding, as well as an introduction to InDesign, which are all geared toward people who are interested in learning new skills that can benefit what they do with their creative passions.

“We like to be a resource for people in all sectors,” Gould said. “You can do your work here, benefit your work here and you can possibly get that work out into the public here as well.”

Getting work out into the public was precisely what editor and writer, Sarah Grey, of Grey Editing did, having published pieces in both of the almanacs published by the Head and the Hand.

“I’m from Pittsburgh, so when the “Rust Belt Rising” almanac was proposed, I was interested since there is a theme that runs through my writing, which was the smokestack in my hometown,” said Grey. “My hometown has the biggest smokestack in the Tri-State Area and it’s the economic engine that keeps the town going, but there’s a sort of contradiction of getting your living from the very thing that poisons you. That’s been at the heart of a lot of my writing.”

The intricate almanacs published by the press company tie back to the original roots of the conceptual idea of an almanac. Each one serves as a way to tap into what the community is feeling and is expressed through pages of literary art.

“In a time when people were reading very standard and traditional books, almanacs were really cool and they still are,” said Gould. “They had a different format and they were a different way of digesting information and we like our almanacs to serve a similar purpose.”

The aesthetically pleasing almanacs are just two of the many publications that are a part of the innovative program, the Community Supported Publishing program, or CSP, at the Head and the Hand.

“I come from an urban farming background,” said Esposito. “So I’ve worked with a CSA before, or Community Supported Agriculture, and I saw how much that benefited the farming industry and kept small scale farming alive.”

Esposito took that lesson and then adapted it into the publishing realm in a creative way. Existing in the critical and tough time in the publishing world, the CSP is used as a way to reach more readers and give people the opportunity to support the company.

The CSP works just in the same way as a CSA, where people pay $50 each year and they receive two boxes of books, one in the spring and one in the fall.

“I wish tons of publishing companies would do a CSP because it would get readers used to it,” said Esposito. “I think it can only benefit the publishing industry.”

With the fall CSP about to be released, it will feature Esposito’s newest work, “Kensington Homestead,” as well as “Blowin’ It” by Fishtown writer, Wintfred Huskey, which showcases the direct collaboration between the editor, writer and his artistic visions for his piece, which is the core of the company’s mission. 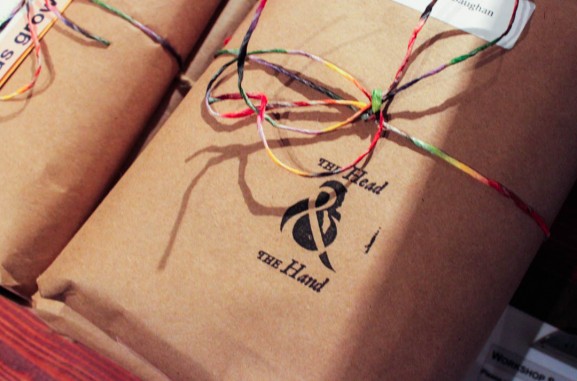 “One thing I really appreciate about working with the Head and the Hand is just the input level that I was able to receive,” Huskey said. “For example, the photo on the cover of the book is by my friend who is a photographer, so I was able to incorporate her work into my own.”

A main value of the editors is to design with the author in mind. In the case of Huskey’s novel, which was released in September, the artists incorporated every design aspect that he wanted, right down to the size of the book.

“Wint is a big fan of Richard Brautigan so we put a 1970s motif on the cover,” said Esposito. “We also wanted it to fit in your back pocket so we actually designed it with the specification of a pocket on a Levi’s pair of jeans.”

With a plethora of projects in the works, the Head and the Hand Press is expecting to publish the next almanac in the spring of 2015, which will focus on food and agriculture.

As the publishing company has plans to expand within the next year, the exciting literary scene in Philadelphia continues to grow as well.

“It’s just wonderful to have a community in the neighborhood with writers and editors and literary things happening right here,” said Grey. “I love that there’s actually a Fishtown literary scene now.”

When Joe Livewell uncovered the “ghost sign” beneath the plaster, a hand-painted advertisement of a boy holding bread, it solidified the fact that Richmond Street was once a place for foot traffic, a place where ads, […]

Fishtown: Selling One-of-a-kind Guitars, One Decade at a Time at DiPinto Guitars

Philadelphia has always been known for its love of cheesesteaks but it is also a city that loves music just as much. From live music venues such as World Café Live, Union Transfer and Electric […]