Lamont B. Steptoe said that when he returned from Vietnam, he was ready to buy a gun.

In the wake of a much-debated war, the veteran was so frustrated with his country that he said he was ready to become a “home-grown terrorist.”

Instead, Steptoe picked up a pen.

He joined Warrior Writers, a veterans-focused arts organization, that gives veterans an outlet for expression through writing, storytelling and visual art. In addition to providing an outlet, the organization’s director, Lovella Calica, said it allows the community to hear about the experiences of veterans.

“It’s also important that the larger community has access to those experiences,” Calica said, “because we as a nation need to better understand, or try to understand, the experiences of veterans who have done what they’ve done in our name.” 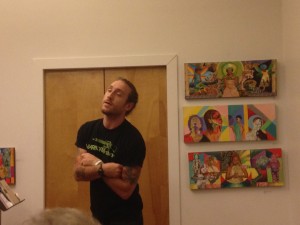 In addition to workshops and other events, Warrior Writers presents the creative works of veterans – including poetry, letters, photographs and paintings – into anthologies. Warrior Writers celebrated the release of its fourth anthology with a party and live performance last month at the Art Sanctuary. The book is 320 pages, features the work of over 70 veterans and can be purchased for $20. Warrior Writers raised the money to publish the book through an online fundraising campaign. 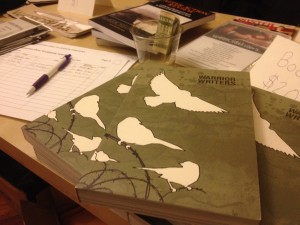 Although the book is mostly poetry, Calica said the writing isn’t rigid or married to any old-school form of classic poetry.

“It’s very sort of raw and honest and accurate to the experience of being vet,” Calica said of the poetry.

Steptoe’s poems, which are featured in the new anthology, revisit his first time going on patrol in Vietnam. Steptoe is a lifelong fan of the work of solider poets. Their poetry combines Steptoe’s family military history and the chaos in North Philadelphia that followed the assassination  of Martin Luther King Jr. That moment compelled him to enlist in the army while he was a student at Temple.

“I had this romantic notion in my head that in order to be a great writer, you had to put yourself in harm’s way,” Steptoe said. “And if you survive that experience, it would give you an authority that no one would be able to question.”

“We’re actually thinking about bringing them into our facility for our annual Vets Serving Vets event,” Owens said. “I found out that they did spoken word. I’m married to a spoken word artist, poet, actress, so this definitely connected with me.” 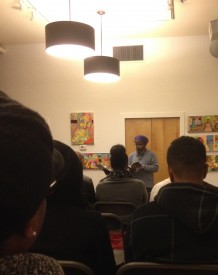 In addition to Steptoe, veterans who served in Somalia, Iraq and Afghanistan participated in the event. Even though they are all veterans, Steptoe said there are two major differences in how Vietnam veterans and newer veterans come back to civilian life. Veterans from more recent wars are more celebrated than Vietnam vets. The younger vets had some warning of what the transition would bring them.

While Steptoe still has frustration from his time in the service, he said that writing gives him an outlet.

-Text and photos by Nic Cutrona and Jenelle Janci.

Efrain Diaz had a bad addiction, a heroin addiction. “I lost my family. I lost my wife,” said the 58-year-old. Yet for the past 30 years, Diaz has been helping people overcome their addictions. This [Read More]