The area is undergoing a transformation with an influx of immigrants and restaurants, bringing in new tastes and enriching the diversity of this historic neighborhood. 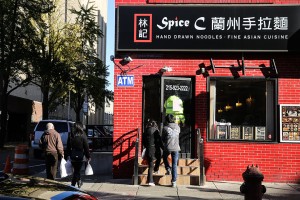 “New restaurants that opened in recent years have their inimitable characteristics,” said Yingzhang Lin, the president of Greater Philadelphia Chinese Restaurant Association. “More indigenous dim sum, noodle and tea stores emerged in Chinatown than ever before.”

Cantonese and Fujianese restaurants used to be the mainstream in Philadelphia Chinatown. But with new people arriving in the region, especially international students, restaurants are beginning to break the pattern.

According to an August report by the Brookings Institution, approximately 7,100 Chinese students with an F-1 student visa came to the Philadelphia area between 2008 and 2012.

“We had about 2,000 Chinese students this past April,” said Wei Wang, the former president of Chinese Students and Scholars Association at Drexel University. “Drexel definitely would have more Chinese students after the new academic year.”

Compared to the Chinatown residents, students are younger. Information spreads fast among the younger generation, especially through social media. This has been a factor in the taste changes in Chinatown.

“Tea stores are the places for young people to hang out,” said Lin. “They are becoming youngsters’ favorites.” 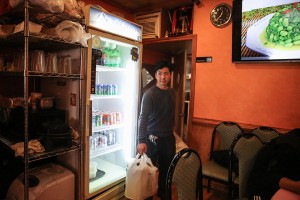 Xinping Wang moved his restaurant from Northeast Philadelphia to 902 Arch St. in May of 2013. The new location downtown also promotes their delivery business.

“Most of my destinations for delivery are University City and Temple’s campus,” said Xinping Wang.

In 2012, Mayor Michael A. Nutter signed the agreement with Mayor Xingguo Huang of Tianjin, China, a sister city of Philadelphia, to encourage trade development.

The agreement draws more visitors to the city from China. The visa convenience in recent years has helped bring in more visitors as well.

Lin also pointed out that retirement was another key point leading to the change in restaurant ownership.

Many Cantonese came to Philadelphia in the early years and a large number of Fujianese have arrived in the city since the 1990s. After operating the restaurants for decades, these early owners are leaving the business.

New Chinese immigrants are not only from Fujian, Canton or the southern areas, but also from the northern part of China.

Xinping Wang is from Xi’an, Shaanxi, a province in the northern part of China and came to Philadelphia in 2003.

“Xi’an cuisines have been popular in New York’s Chinatown area since several years ago but Philadelphia did not have this style of Chinese food,” said Xinping Wang, “I want to bring our traditional food to Philadelphia.”

As the only Xi’an cuisine in Philadelphia, Xinping Wang opened his second spot this June in Old City.

“It is rough to run Chinese restaurants in America,” said Xinping Wang.

The rent for restaurants in Chinatown is high.

The rent for Xinping Wang’s Chinatown restaurant is $3,500 per month with a tight capacity of about 60 people. Though the rent of the Old City site is more than $8,000, it is a three-story restaurant with a bar, three karaoke rooms and the capacity for around 150 people.

Dim Sum Hand Drawn Noodle, located on 1028 Arch St., opened this past May. The owner, Xiangliang Zhang, invested more than $20,000 on the restaurant that serves noodles, dim sum and frozen yogurt. But the business has not reached Zhang’s expectations. 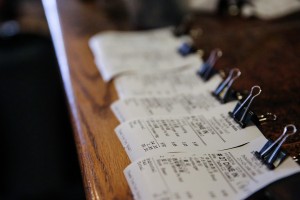 “The restaurant business is competitive in Chinatown,” said Lin. “The rising prices of commodities generates more difficulties on the business.”

According to the Consumer Price Index provided by the Bureau of Labor Statistics, the food and beverage index has risen from 184.1 to 237.2 in the last ten years.

“It is lower cost in noodle restaurants and tea stores,” said Lin.

The average expense per person in Zhang’s noodle restaurant is about $10. But this number would be at least $20 if customers visit traditional cuisines restaurants.

“For owners, the restaurant business is getting more difficult year by year,” said Xinping Wang. “We are also seeking innovation.”

Restaurants in Chinatown have begun to make it a point to make their presence known on social media.

For most new restaurants, they have also established well-designed websites and started to operate accounts on WeChat, the most popular social media app among the Chinese community.

Owners encourage customers to share their photos and experience on social media, advancing the spread of information.

Opportunities and challenges are coexisting for these new restaurants in Chinatown. But the appearance of new restaurant businesses builds a vibrant environment in the area.

Trevor Hayward left his home in Ireland and came to the United States in 2007 to continue his education. He is now the co-owner of Evil Genius Beer Company, which opened March 8, 2017 on Front […]

The bustling corridors inside of the Philadelphia Wholesale Produce Market (PWPM) can be an overwhelming place to think logistically about purchasing produce. The market is inside of a massive temperature-controlled building that spans more than 14 football fields long, where […]