In what appears to be a nondescript building on North 11th Street in Callowhill  (sometimes referred to as the Loft District), an organization of artists and art galleries have established spaces to work and show their talents to the Philadelphia area. Among these are the Napoleon gallery, Apple Jacks Studio, and Marginal Utility Inc. The building is owned by Bonna and Bob Weinstein, who also own the Khmer Art Gallery (below), located on the building’s bottom floor. 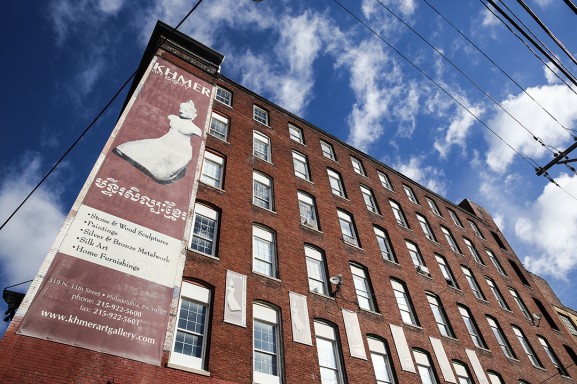 Bonna emigrated to the U.S. in 1984 from Cambodia due to the Khmer Rouge, when followers of the Communist party of Kampuchea in Cambodia orchestrated a genocide and killed intellectuals, those who lived in cities, minorities, artists and anyone they expected to be a traitor. At least 1.7 million lives were lost.

“After the war, a lot of artists and educated people were executed. When my husband and I decided to do this, we went back to Cambodia and it took us a few years to scout for surviving artists,” Bonna Weinstein said. “I’m from Cambodia and my heart and soul is still very much with the art and culture. I wanted to share it with the public.”

The gallery consists of various types of artwork like stone statues, copper tables and urns, paintings, fabrics, scarves and wood carvings. But what makes the pieces special to the Weinsteins is that each was hand-picked and all are available for purchase.

“They’re all pieces that we love,” Bonna Weinstein said. “It’s not all just mass-produced for the purpose of selling. We love to share them. If the pieces can find a new home, then we would love for that to happen as well.” 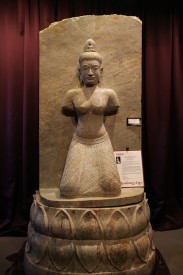 Typically, the pieces are selected by Bonna and Bob in Cambodia and are sent to the New York Harbor in containers, where they go through customs and are then trucked to Philadelphia. Some pieces took at least eight or more people to move and arrange in the gallery.

“Some of the sandstone statues are close to two tons,” Bob Weinstein said.

Despite the difficulties they’ve encountered, the Weinsteins believe they play a small yet important role in the education of Cambodian art and diversity and to help past and present generations of Cambodians regain a sense of pride in their home country.

“For Cambodians, I think the art is something for them to relate to, look back on and look up to because many people only associate the word Khmer, which means Cambodian, with the Khmer Rouge,” Bonna Weinstein said. “The chapter of Cambodia at that time is just that, a chapter. It doesn’t define Cambodia. It cannot overtake its grandeur.”

Although Khmer’s artwork is Cambodian, the Weinstein’s also enjoy teaching non-Cambodians about their history and believe that tolerance for others is taught in the process.

“For those who aren’t Cambodian, we’d just like them to learn about us a little more and see where we’re from, and that we’re not just refugees looking for a handout,” Bonna Weinstein said. “We’re here, we have pride and we want to work back up to how we were in the past. We play a role in the education of diversity because when people love art of their own ethnicity, they start to appreciate other art as well.”

Bob Weinstein has been a visitor and patron of Callowhill since he was a child, when he frequented the neighborhood with his dad. He has seen the area become a destination for those who enjoy creating, buying and viewing art.

“Since we’ve started here, it’s developed,” Bob Weinstein said. “There are a lot of artists in the building and surrounding the building. Before, the area was kind of out of the way. But within the last five or six years, it’s become a destination. People crowd here because there are a lot of galleries and artists around.”

Although Chinatown is the home of people from all different regions of Asia, “most people think it’s primarily Chinese,” Bob Weinstein said. He and Bonna are glad that they were able to allow the Cambodian region to have adequate representation, especially for the sake of the newer generation. 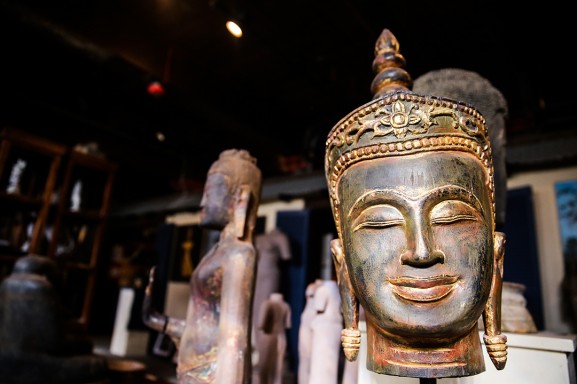 “When the children of Cambodia come here and see what we have to offer,” Bonna Weinstein said, “they’ll say, ‘Wow, this is our history and heritage.’”

Being that the Weinsteins have provided a large space, within both the Khmer Art Gallery and the building as a whole, for artists to exhibit their work, they see themselves as educators who have left people from the Philadelphia area with a possible lesson.

“In the future, we plan to continue to show the culture and art to the public and help educate anyone who wants to learn,” Bonna Weinstein said. “People have come here just to kill time. But nine out of 10 visitors thank us and say that without the gallery, they wouldn’t have known about that part of the world. That’s what’s most satisfying.”

– Images, text and video by Ariane Pepsin and Hua Zong