Before becoming a mechanic, Patrice Banks described herself as an “auto-airhead.” Put simply, she knew nothing about auto mechanics. When her search for a female mechanic in the Philadelphia area went unanswered, she decided to fix her own problem.

Banks is now the founder of Girls Auto Clinic, a business that caters to women to help them understand how to properly maintain their vehicles.

“I call my supporters ‘sheCANics,'” Banks said. “It is a woman who is empowered to educate herself and go from yes I can to yes I did.”

In 2013,  25.4 percent of jobs in motor vehicles and motor vehicle equipment manufacturing industry were held by women, according to Catalyst.

Banks’ mission is to empower females to impact this male dominated industry. 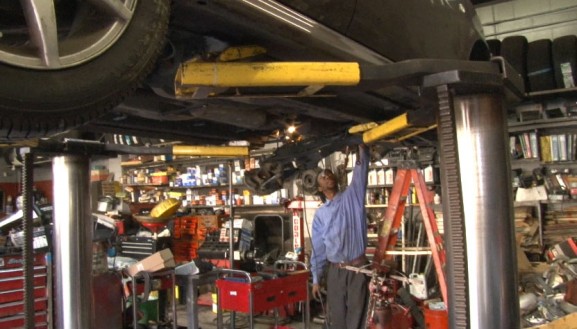 “My workshops help because when mechanics are spitting terms and lingo at you, it can be overwhelming,” Banks said. “It becomes hard to determine what repairs you need and what you don’t.”

According to the U.S Bureau of Labor Statistics, the average American household own spends around 1.5 percent of its annual income on auto repairs.

Automotive technicians have seen a rise in salary as making it one of the highest earning careers that doesn’t require a degree making the career more attainable for all people regardless of gender.

Banks plans to open the first all-female auto mechanic shop in Philadelphia in the spring of 2015.

[vimeo 79845925] Green Line Café recently hosted the opening of “Dreaming Double” by photographer Katie Reynolds. The series of double exposure photographs was captured around Philadelphia. Friends came out in support to the 43rd Street and [Read More]

The major budget cuts the School District of Philadelphia had to endure had a direct impact on music and art programs throughout the schools. Established in 2011 at St. Francis De Sales School, Play On, [Read More]

For 41 years, the 14-acre plot on Filbert Street between 37th and 38th streets was home to University City High School, Charles Drew Elementary School and The Walnut Center. Today, those buildings have been erased from [Read More]