When Saquan Dixon walks through the Mantua section of West Philadelphia, he feels a vibe much different from the Kensington neighborhood where he was raised.

Neither Mantua, also known as “The Bottom,” nor his neighborhood in Kensington have sparkling reputations but the 20-year-old Dixon sees a bright spot in Philadelphia’s Promise Zone.

“I’m not too familiar with the neighborhood in Mantua but the people seem pretty cool,” Dixon said. “When I come down here, I see people and they say, ‘Hello,’ ‘Good morning,’ ‘How are you doing?’

Positive interactions aren’t limited to passersby on the sidewalks for Dixon, who comes to Mantua primarily for the services offered by Face Forward 2.

According to the Juvenile Justice Center Family Services website, Face Forward 2 “provides workforce development for young people who have been involved with the juvenile court system.” Additionally, “the program is focused on young people who have an interest in pursuing career-recognized credentials and skills.”

Dixon enrolled in the program several months ago but had to take some time off due to family issues.

“I came back because I know this is a good place for me and because I did succeed with a job while I was in this program,” Dixon said. “I used to work for SafeLink Wireless, which gives free phones to people on welfare and people with medical issues.”

Before attending the program, Dixon said he never knew about resumes or how to create one for himself. Although he no longer works for SafeLink, Dixon has an up-to-date resume and he is actively searching for positions with the help of the staff at Face Forward 2.

“I get a lot of help using the computer … plus I have somebody to talk to,” Dixon said. “If there are some things I don’t want to say out loud, I can go ask them for help because sometimes I might be shy about it and they help me and they say, ‘Don’t be afraid. You need some help? Let us know.’”

Located near the corner of 35th Street and Haverford Avenue, Face Forward 2 began sharing office space with the Mantua Community Improvement Committee in February 2015, shortly after the Juvenile Justice Center in Germantown received approval through the Department of Labor to create three new programs.

With the new programs in need of leadership, JJC looked to longtime employee Sheila Armstrong-McGee to get Face Forward 2 up and running in the Mantua community. 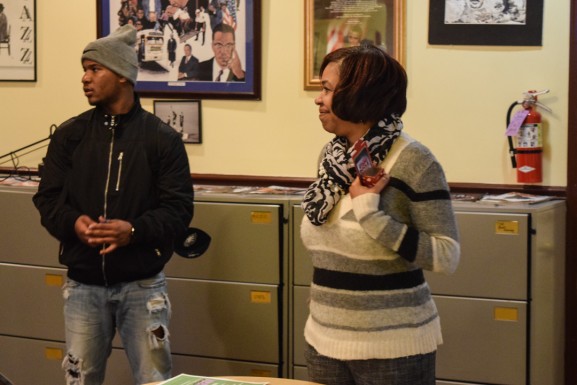 A 11-year veteran of JJC, Armstrong-McGee (above, right), 56, had been running the agency’s Home Based Delinquent Services before being tapped to run Face Forward 2 as its Project Director last February.

“It’s really different because this is the first time I’ve actually been off site from our main office and it kind of feels like a new job even though I’m with the same agency,” Armstrong-McGee said. “It’s a little different being over here in Mantua because I had to learn a lot about the community when I first came here, to get to know the youth that live in this area.”

Armstrong-McGee, who grew up in North Philadelphia near 25th and Diamond streets, was a part of Martin Luther King High School’s first graduating class in 1977 and received her associate’s degree in 1982 from the Philadelphia Training Center, which has since closed.

After earning her master’s degree in human services from Lincoln University in 2005, Armstrong-McGee was hired by JJC as a supervisor.

“I started out working with adults in the domestic violence field and what made me get into the helping people field was just because so many people went through life-changing situations around me when I was younger and I wanted to do something to give back,” Armstrong-McGee said. “So I actually started working with adult females who were being abused and caught up in the web of substance abuse.” 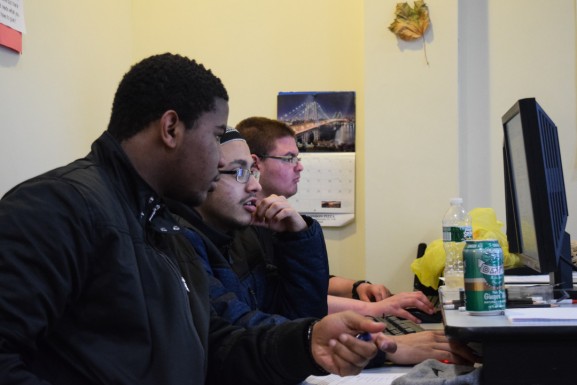 During her 11 years with JJC, Armstrong-McGee has helped start four different programs, with Face Forward 2 being her most recent project.

Face Forward 2 offers a wide range of activities to its participants, including but not limited to a mentorship program, service learning projects, certification classes, case management and a job readiness program led by computer consultant professor and Mantua native Anthony L. Carter Sr. (below, right).

The participants, ranging from ages 14 to 24-years-old, are also eligible to receive stipends, which can total up to $80 every two weeks. 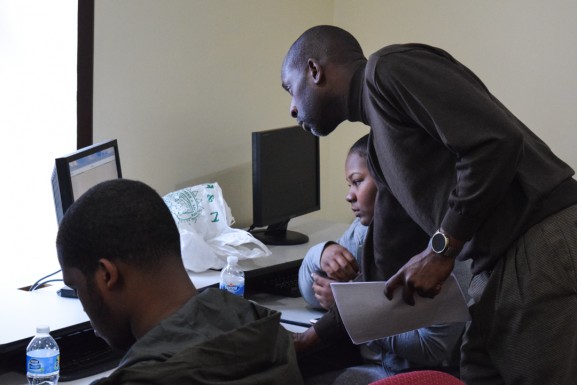 –Video, text and images by Joaquin Jones and Tom Reifsnyder

The changing of seasons can mean many different things, but to West Philly Tool Library, it means a change of inventory. “This time of year we have a lot of gardening tools,” said Kathleen O’Donnell, [continue reading…]

Kensington: Funeral Mansion is a Staple Through Generations

[vimeo 59587492] In the heart of  Kensington  on the 3300 block of G Street stands an architectural oasis. Standing for over 100 years, the building is now the Guckin Funeral Mansion. The massive structure has not [continue reading…]