Philadelphia’s economy thrives off of tourism and service industries and now the city is highly known for its love of craft beer.

The most popular event is always Philly Beer Week, which brings in approximately $16 million directly to Philadelphia. In spring 2016, the city will host the World Beer Cup, a global event that calls itself “the most prestigious beer competition in the world.” 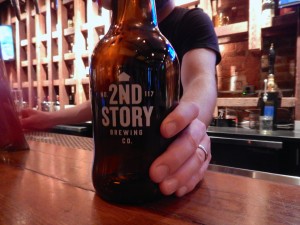 But now, a city with no brewery in Brewerytown, Philadelphia is making slow progress to try and get back into the production of things.

“It would be great if the city weren’t just a beer city, but a good brewing city,” said John Wible, brewer at recently opened 2nd Story Brewing Co., the only brewpub located in Old City.

Don Russell (a.k.a. Joe Sixpack) was able to shed some light on the matter. Russell mentioned multiple complaints he’s heard from small beer startups and investors feeling discouraged by the city’s bar and restaurant bureaucracy.

In 2012, there were hopes the Colorado brewery New Belgium would set up shop in the Navy Yard, but instead the company headed to Asheville, North Carolina. That’s despite Philadelphia offering state and local tax breaks supposedly valued in the millions, and up to $30 million in financing from the Philadelphia Industrial Development Corp., according to the Philadelphia Business Journal. The brewery could have offered around 150 jobs.

The number of American breweries is at a record-breaking high since the first breweries set up shop in 1887. Not far behind California—the state with the most breweries—is Pennsylvania, which tied with Wisconsin in 10th place [continue reading…]

In 2004, Manayunk was faced with a problem. The Philadelphia Water Department needed to put in a sewage overflow tank and had picked Lower Venice Island for its location. However, the island, tucked in between [continue reading…]