“We were thinking of ourselves as a laboratory as much as a performance company, and so the school was really a chance to put our attention on the laboratory – the research, the growth of young artists to develop theater that will change how people perceive theater in the years and decades to come,” said Quinn Bauriedel, school director and co-founder of Pig Iron Theatre Company. 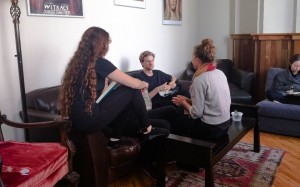 The training program consists of six trimesters that last 10 weeks each. Students typically spend four to seven hours daily in classes. The program requires 26.5 hours of class time per week, totaling 1,590 hours for the complete training.

The program runs on a pass/fail basis and students who successfully finish the program are presented a certificate in Advanced Performance Training.  The school is currently working on developing a master’s level program. Currently, tuition for the program is $12,000 per year, which is likely to rise to $12,500 next year.

Bauriedel and current second-year ATP student Megan Thibodeaux spoke about some of the interesting and unique ways Pig Iron goes about educating its students.

“What I desired the most was a program that gave me the opportunity to get pushed up against material and get my hands dirty,” said Thibodeaux. “In looking at other programs, I felt like the structure and having the certification was less important to me than finding a program that excited and inspired me.”

So far, the school has had a total 45 students: 15 of whom have graduated; 15 in their first year and 15 in their second year.

“It seems 15 is kind of the magic number,” said Bauriedel.

The small class sizes allow for students and faculty to familiarize themselves with one another and to become comfortable collaborating on pieces. 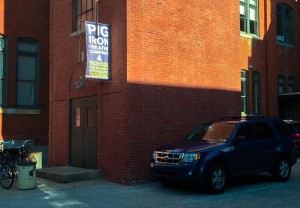 “The school functions well within the groups of 14 to 20 – it’s a school that has a lot of individual attention and work, but we also want to forge these ensembles and figure out how to work in collaboration with others, so that number seems to be the sweet spot,” said Bauriedel.

Bauriedel stated that with the number of students being what it is, faculty members are often very involved in the artistic development of their students. However, he also noted that they are sure not to force their ideas on the students – this allows for personal artistic growth.

“There is a level of the faculty feeling that we are the guides of the journey, of the program,” he said. “We help them and push them day in and day out, but the school is not a space for us to impose our theatrical vision – it’s a place for us to support and light fires under their [the students’] theatrical vision.”

The idea of ensemble theater is to bring together a group of artists to create a collective unit. Cooperative learning is major facet of Pig Iron’s training methods. Students often collaborate to put together artistic pieces.

“In order to make something as a group, there is a sensitivity to all the artists you’re collaborating with, and also learning how to defend your ideas,” said Thibodeaux.

Students work together on movement pieces as well as pieces involving text. The students switch their partners almost every week and get a feel for working with different artists.

“Working with different students almost every week brings different energies together and is one of the catalysts for what kind of a piece comes,” said Thibodeaux.

The process in the school is different in that it requires students to do a little bit of everything. Students at the school are not only actors, but also producers, writers and designers.

“I decided to join the program because there is an openness to people with a variety of backgrounds in the arts,” said Thibodeaux. “I was excited to be in a group of people that was interdisciplinary and multidisciplinary and to push up against new forms.”

Most of the school’s training methods borrow from the teachings of Jacques Lecoq, a French actor, mime and theater instructor well known in the theater community. Many of the instructors at the school studied under Lecoq in the school he established in Paris called L’École Internationale de Théâtre Jacques Lecoq.

The Lecoq method is heavily concentrated on movement and training the body to be expressive on stage. Lecoq teachings also encourage students to examine the movement in everyday life. Starting without scripts and using themes to start the creative process are among Lecoq’s main teachings that the school has adopted.

“When I came here, I was mystified to how I would go into a room with a group of people and nothing else there and make a piece,” Thibodeaux said. “So I think having the freedom and bravery to 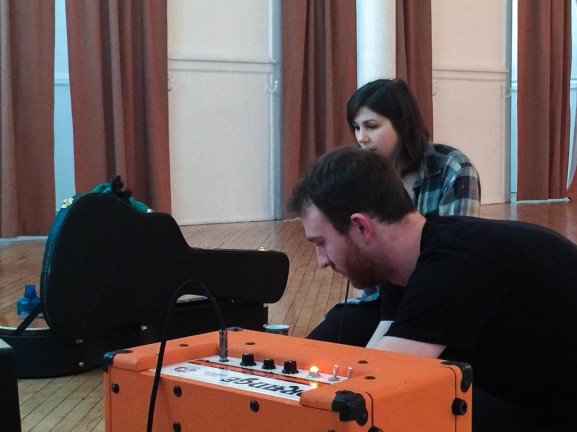 take an idea and explore its extremes is something that the school has taught me is possible.”

Another piece of Lecoq’s method that Pig Iron draws from is the use of commedia dell’arte masks. This form that originated in the 16th century in Italy was adopted by Lecoq and taught in his school.

The first year of training for the students mainly focuses on the mechanics of performance. Students are taught about the expressiveness of the voice and the body.  Also, students learn how the ensemble method of theater works.

“The first year of the program focuses on the things that are unseen,” said Bauriedel. “It’s like the bottom of the iceberg.”

The second-year students explore the different theatrical territories including tragedy, melodrama, clown, bouffon and grotesque. The school also works to combine different aspects of theater like dance and music.

“We work in a way that isn’t conventionally academic,” said Thibodeaux. “We do a lot on our feet rather than over-analyzing things, and I think that’s one of the reasons I’m drawn to this school.”

Bauriedel made it clear that Pig Iron is not necessarily training its students to get to the lights of Broadway.

“The idea of what it means to be famous in our school is a little different than other schools,” said Bauriedel.

With the inaugural class only being out for only one year, Bauriedel is proud of the work they’ve done.

“We’re not really training people to go out and hit it big on the marquee, but to actually make things that are moving and impactful, and that I think will bring its own attention,” he said.

Multiple companies have been formed out of the school that have toured in various parts of the world. They have also had alums that have gone on to work with prominent directors in the industry.

“I had been working with the company [Pig Iron] on the administrative side and saw the inaugural class go through the program, and it was very exciting. I was excited by the type of work they were creating,” said Thibodeaux.

According to Bauriedel, Olde Kensington has been a wonderful home for the school. 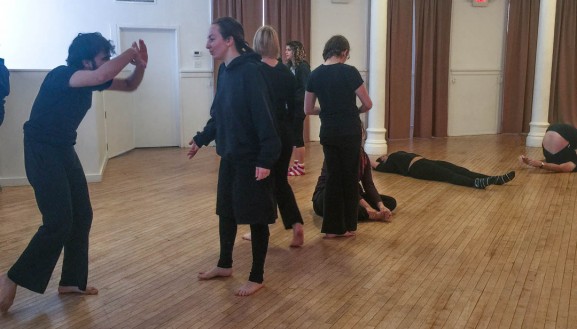 “We’re really happy in this neighborhood—it has been great,” said Bauridel. “It allowed us to have a home base with a lot of studio space.”

In addition to the wealth of space, Bauriedel expressed that the other companies that share the building are making for a blossoming and enriching artistic environment. The building, located at 1417 N. 2nd St., also houses a museum, an art gallery and Raices Culturales, a nonprofit Latino arts and culture organization.

Most of Pig Iron’s students are able to live within walking distance of the school. With the location being near places like Fishtown and Northern Liberties, Bauriedel feels that the neighborhood is becoming somewhat of a hub for artistic creation.

Pig Iron as a company is heavily involved in the theater culture in Philadelphia. Pig Iron School has done work with the Philadelphia Fringe Arts Festival, premiering many of its recent shows there. They have also worked with a variety of artists on an individual basis.

Bauriedel explained that Philadelphia is a great place for the company and school in terms of funding, partnership and having an audience interested in the genres they produce. There are an abundance of well known theater companies in Philadelphia, which also make this location valuable to Bauriedel and the school. Also, Philadelphia’s proximity to major cities like New York and Washington offers its students and faculty opportunities to work and tour in these larger cities. 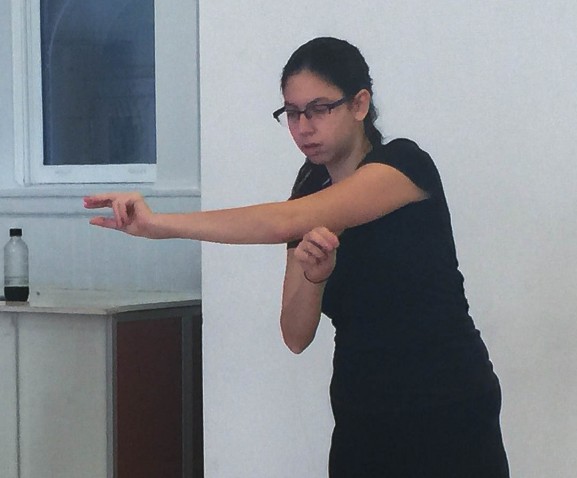 Although Philadelphia is a place where there are various avenues to explore culture and even theater in general, Bauriedel hopes that Pig Iron is a place that is doing it differently. He offered insight on the theater company’s intention in creating the school.

“There’s a level of innovation I think we’re interested in and, not only risk, but also cultivating artists who have something that they want to say to the world,” said Bauriedel. “And I guess [the school] was a chance for us to support that and help that grow.”

Innovation and risk are only two of the many more abstract qualities Bauriedel said he hopes that the school passes on to its graduates.

“I want to have jobs and get artistic work, of course, when I leave here,” said Thibodeaux. “In a way, this is a more personal thing to fuel and inspire my own work. I don’t really have an end goal leaving this program … I just want to continue as an artist and to continue collaborating with others.”

Many of Thibodeaux’s aspirations align with the goals and characteristics Bauriedel hopes to achieve and instill in his students.

“I don’t want the school to be a training ground where there’s a lot of little Pig Iron Companies emerging,” Bauriedel said. “My hope is that people sink their teeth in and they can generate their own artistic vision and go off and make that, and it may look very different than what Pig Iron does.”

Northwest: Enemies of the Wissahickon

William Penn believed that open, natural spaces worked positively on the mind as well as the body, providing respite from the chaotic pace of urban life as well as the unsanitary closeness of quarters. Today, [continue reading…]

The Philadelphia Streets Department announced plans to allocate funding for the city’s first protected bike lane to be built along Ryan Avenue, between Lexington and Rowland avenues, in Mayfair. “We had a councilman who wanted [continue reading…]