It’s a lazy Sunday afternoon in Port Richmond, the day after a messy snowstorm dumped more than four inches on the area. Few people are out on the streets, someone here and there shoveling snow off the sidewalk or away from their car.

People stop on the corners to chat with their neighbor for a minute, while a group of men in their mid-twenties throw snowballs at each other in the street. But otherwise, Port Richmond is quiet.

Dante Porcelli, 23, has lived in this neighborhood for almost two years.

“It’s just a little neighborhood inside of a big city,” Porcelli said. “You don’t really feel like you’re in a big city but you can always go quickly 10 minutes down the road and you’re there.”

The primary mayoral election is coming up in May but most people in Port Richmond do not seem to be paying much attention. Problems persist in addressing key issues that the neighborhood faces, such as a generation gap between incoming younger residents and longtime older residents, and consequentially the direction in which the neighborhood is headed.

John Rajca, president of Friends of Campbell Square, doesn’t have much hope for the next mayor of Philadelphia.

“The last great mayor for this city was Frank Rizzo,” Rajca said. “I do not see anyone approaching that stature in this race.” 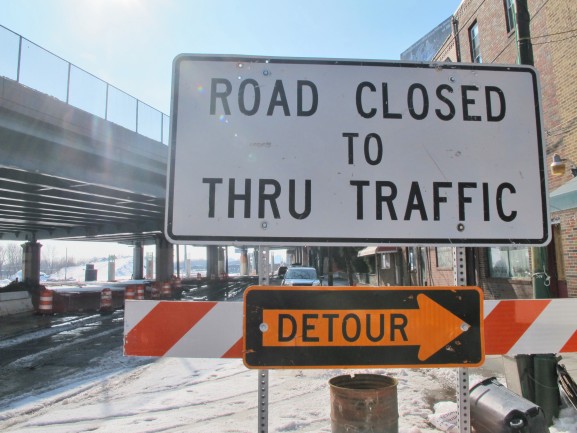 At the end of Richmond Street there is a big detour sign, with large cranes and a huge area of dirt under the I-95 overpass. The construction will extend I-95, as well as add a trolley line to Port Richmond. Along with these new additions will be the Port Richmond Trail, which according to Philadelphia’s Parks and Recreation website will be a “two mile stretch of sidepath trail, which will ultimately be a part of the Delaware River Trail and the East Coast Greenway.”

The construction is a big step in a sleepy river ward. Maryann Trombetta, 61, head of the Port Richmond Town Watch, is optimistic about changes coming to Port Richmond. 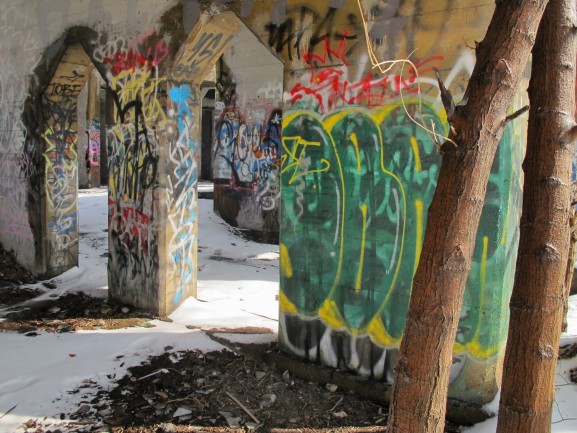 “I am still waiting for this big, gigantic change that’s going to happen in Port Richmond, as it’s happened to Fishtown, parts of Kensington, those kinds of things, where they’re building houses and building up,” Trombetta said. “I think we are the next on that line.”

In last years governor’s election, Philadelphia had the second lowest voter turnout in a gubernatorial race since 1990. In total, Port Richmond has 61 percent active voters.

With younger people moving into Port Richmond and youth voter turnout down, will Port Richmond be able to keep up with the times or will it continue to be an under-the-radar town?

“I got my shit to figure out and I don’t really know what I’m doing with my life yet,” Porcelli says. “I’m just trying to figure out how to pay bills and how to have fun while I’m doing it. I don’t want to get involved in politics. It’s never been my cup of tea.”

Around 70 percent of the voters in Philadelphia between the ages of 18 and 24 are inactive. Many younger residents in Port Richmond feel politics and issues in Philadephia do not directly affect them.

Patrick Sullivan, 25, has lived in Port Richmond for more than two years.

“Many of the families in Port Richmond have been there for generations,” Sullivan said. “A lot of the growth – and contrarily the decline – that happens in the city does not particularly affect the Port Richmond area. Port Richmond is always a quiet town that does not feel a very heavy influence from what goes on in the rest of the city.”

Port Richmond is only reflecting a larger issue in this city. As Philadelphia is gaining an influx of millennials moving to the city, millennials seem to be uninterested in politics.

Most of the candidates running in the upcoming primary mayoral election are regulars in the Philadelphia scene, like Lynne Abraham, former Philadelphia district attorney, and Milton Street, a former state legislator. These candidates may be familiar names but to the younger generation, are behind the times. Without candidates reaching out to young people and in turn, young people participating in politics, will Philadelphia continue to grow?

Port Richmond is an example of what could be.

“It’s tricky because it needs one domino to fall, and then it turns into a Fishtown or Northern Liberties,” Porcelli said. “If one of those things fall, it could be cool. Or it’s just going to stay the way it is and everyone’s going to keep driving by.

– Text and images by Kerriann Raimo and Regan K Abato.