The Lansing Knights Youth Organization provides kids from preschool to high school with the opportunity to play sports and hopefully learn a few lessons about life along the way.

Brian Dunfee has had an active role in the nonprofit since 2008, when he became a board member. Last year, he took on even more responsibility by becoming the president of the organization. He sees firsthand how the league affects its young players because his children have been a part of the Lansing Knights for years now.

“The league teaches them about teamwork and commitment and how to win and lose with dignity in life,” he said. 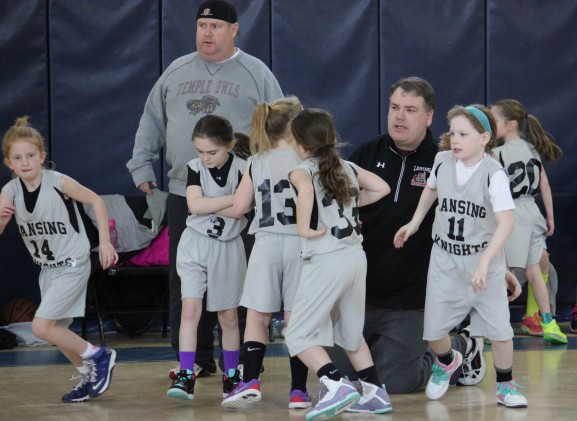 Also a coach for his daughter Claire’s basketball team, Dunfee understands the importance of volunteers to this league. Volunteers are needed to coach the teams as well as help with the fundraisers that occur throughout the year.

Coach of the under 12 girls’ basketball team and mother to player Katie Harmon, Tracey Harmon dedicates her time because of the passion she has for sports and for her players to succeed.

“I want to be able to help all the girls out there get the opportunity I had to play at the next level, whether it is in high school or in college,” she said. “I want to teach the kids never to give up, that hard work does pay off, that their actions matter and school and studies are everything.”

For Jen Cheeseman, assistant softball coach and mother to three Lansing Knight athletes, the league is a family affair. Her husband is a basketball coach and her twin daughters, Bridget and Devon, play U10 softball while their older sister, Morgan, plays under 12 softball. Though Jen Cheeseman grew up in Northeast Philadelphia, her involvement in the league didn’t start until Morgan was 8 years old.

“Playing for the Lansing Knights has made them grow up and gave them a sense of responsibility,” she said.

Friendship is a huge part of the league for both the players and their parents. Jen Cheeseman has become close with other parents from Lansing while her daughters became friends with their teammates. Dunfee hopes that the friendships the kids are making now will last as they get older, just like it did for him.

“I am still friends with people I played with when I was younger,” he said. “These kids are growing up playing on the same teams and becoming friends.”

Players as young as 3-years-old can play for the Lansing Knights, so many have been a part of the league since an early age. Because sports including baseball, softball, basketball, lacrosse and soccer are offered, some even play year ’round.

Tracey Harmon emphasized the importance of the children’s involvement from a young age and how it shapes the league. She coaches with a focus on team unity which is a lesson that can be used in sports and in life.

“We are a very family oriented, tight, caring group at Lansing,” she said. “I believe when the kids get involved at a young age they are taught the values to belong to something and they can make a difference, feel important, on or off the field.”

With so much time spent with each in practices and games over the years, a bond is created between players and coaches and with the players themselves. 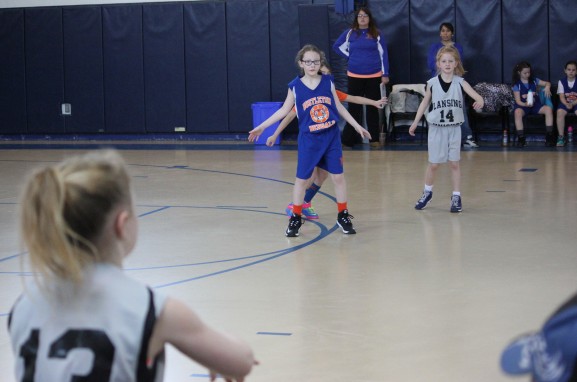 “We go on fun trips and have a great time with friends,” Katie Harmon said. “At the end, we become a family with all the friends and coaches.”

Since the Lansing Knights are a volunteer based nonprofit league, funding can become sparse. Dunfee, along with the board and other volunteers, use creative tactics to get people’s attention – and money. Cow Chip Bingo was a unique fundraising idea that started in 2013. The objective is for the cow to discharge feces onto one of the many squares spray-painted onto a field. If the cow lands on someone’s chosen square, they win a cash prize. The league also uses beef and beer events to raise money.

Aside from fundraisers, the Lansing Knights Youth Organization has the support of the neighborhood to get them by. There are people who donate money to the organization even if they do not have children playing for the league.

“It really is a community effort,” Cheeseman said.

Text, photo and videos by Allie Kachapuridze and Siobhan Redding.

Anita Lyndaker-Studer is the executive director of the Oxford Circle Christian Community Development Association. Originally from Columbus, Ohio, she moved to Philadelphia after she graduated from Cedarville University with a degree in social work and [Read More]

Somerton: Looking Back, Byberry “Got Twisted Along The Way”

It has been a decade since the 2006 demolition of much of what was once the Philadelphia State Hospital, more commonly known as Byberry. The mental health institution, established in 1906, quickly found itself in [Read More]

The Far Northeast is known as an area of religious communities. It’s a place where churchgoers can admire the majestic architecture and history of some of the region’s oldest churches. Pennepack Baptist Church (above), located at 1832 Krewstown [Read More]