Just because a sport is not featured on ESPN does not mean that it does not take incredible athletic ability.

Goalball is one of many sports that blind or visually impaired people play and many compete in it at a high level all around the globe. Originally developed to rehabilitate visually impaired veterans who returned from World War II, goalball has been in the Paralympics since 1976. It is now played in more 100 countries around the world. 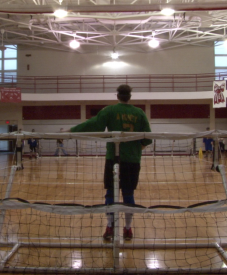 The 2014 IBSA Goalball World Championships in Espoo, Finland showed that goalball’s popularity really is growing. The event was streamed live online and a TV deal was signed for the first time. Finnish TV broadcast the finals live, drawing in an average of 35,000 viewers.

Goalball is played three-on-three with all players required to wear blackout masks. During the two timed halves of the game, each team tries to roll a three pound ball into their opponents goal while defending their own. The ball has bells inside it and the noise they create helps the players track the ball’s movements throughout the game. Silence is of the utmost importance during goal ball so the players can hear the ball as well as the movement of their teammates and opponents.

For 183 years, the Overbrook School for the Blind has been there for the visually impaired of Philadelphia. However,  many visually impaired kids have gone to other schools. Concerned that blind students would miss out on physical education if they switched schools, Dr. Mae Davidow started the Pennsylvania Association of Blind Athletes. Today it is known as the Blind Sports Organization.

Davidow was visually impaired from the age of 10 and later became the first blind person to earn a master’s and doctoral degree at Temple University. She was a blind athlete herself, winning gold medals at the national level even at the age of 75. 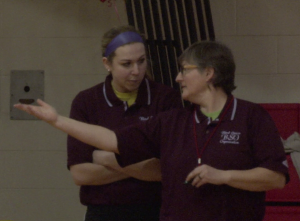 The BSO is still going strong today. Last month, the organization hosted a goalball tournament at the Overbrook School for the Blind. Teams from Pennsylvania, New Jersey, New York and Delaware attended the tournament with their families and friends. Volunteers were there to help the BSO staff and athletes throughout the day but having enough volunteers and adequate funding has been an issue at times for BSO.

“Small, nonprofit organizations always have trouble raising money,” said Sandy White, Davidow’s handpicked successor and current sports administrator for BSO. “Most of our volunteers that you might think could help raise money are coaches with families and full-time jobs. So they don’t want to do anything more than coach. Most of the players have a challenge to do much fundraising.”

BSO has had to resort to reaching out to organizations such as local Rotary Clubs for assistance but so few sighted people know about BSO or blind sports. Many do not realize there is more than just the Paralympics.

“I think some people get to the point when they believe that people with disabilities are not athletes and can’t be athletes,” said Kim Michener, head referee for the BSO goalball tournament and an Overbrook School for the Blind employee. “There’s just not very much publicized information on disabled sports in general in the United States. So, I think that it would be great for sighted people to come out and see the game.”

Despite some struggles to grow BSO and goalball locally, there are high hopes for blind sports as it grows on the international stage. While fundraising is important for BSO, it can’t happen without increased exposure for blind sports in general. Many off the athletes and organizers strongly encourage anyone and everyone to come out and see, or hear, how incredible goalball and all other blind sports are.

Among the various neighborhoods that make up Philadelphia, North Philadelphia harbors many small businesses and institutions that you probably didn’t give much thought to. The following five places serve to better the community and provide [continue reading…]

Online shopping is the new trip to the mall. With the rise of Internet commerce, business owners are capitalizing on digital opportunity. Luba Patlakh, a 26-year-old Ukraine-to-Philadelphia transplant, cut her slice of the pie with [continue reading…]