Chris Wood is a 31-year-old stand-up comedian that grew up in West Deptford, New Jersey and has been making a name for himself in the Philadelphia comedy scene. While working in an auto body repair shop during the day, he performs as a stand-up comedian at night at open mics and showcases around the city.

Wood played hockey as a kid but never liked it too much because of his height.

“I stunk at it,” Wood said.  “I’m too tall, like a high center of gravity. I would get fucked up…Dude, embarrassing, every time. My dad would drive me home afterwards. It would be quiet because he saw his son get wrecked.”

He attended West Deptford High School where he was known as the class clown and always got into trouble because of it. Of course, he got the “Class Clown” superlative when he graduated. 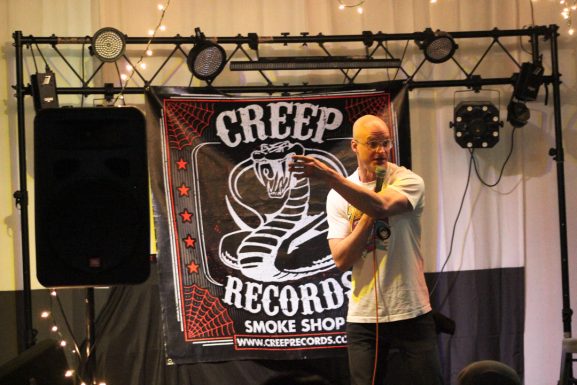 After high school he attended college and majored in political science at West Chester University. He worked as a worker compensation adjuster out of college but it didn’t stick for him.

“You kind of got to be a certain way in those environments and that’s not easy to do eight hours a day,” Wood said.

Wood met Brian Finnell while doing comedy in Philadelphia. Finnell told Wood that he needed a pair of hands in the body shop he worked at. Wood took him up on the offer and found out he enjoyed working on cars.

“I watched him deal with learning stand-up the same way he deals with cars,” Finnell said. “Which means he bombs and then he is just miserable the rest of the day.” 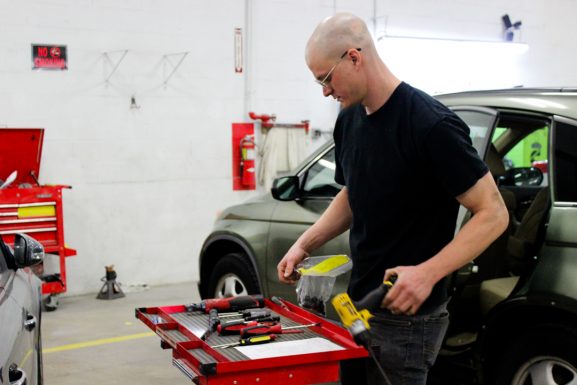 Wood has had a year and a half of improving his skills as an auto body repairman. While he might not be the best auto body mechanic, he is improving and hopes to stay put in this field for some time.

Wood became interested in doing comedy simply because he liked to make people laugh. He has been performing for seven years and counting. Wood originally paid $250 to take a comedy class at The Comedy Cabaret in Philadelphia, which he attributes to helping him get up on stage for the first time.

Wood tries to perform as much as he can each week to practice new jokes and see what reactions he can get out of the crowd. He sits down for about an hour a day, usually at the end of the day when he is tired, trying to come up with new material for his stand-up.

When he is not performing in Philadelphia or working at the shop in Delaware County, he likes to spend time doing tai chi at home some mornings.

“If you don’t do tai chi, do tai chi,” Wood said. “You do feel like an action hero doing it. I definitely am not getting the mental benefits you are supposed to get out of it like, center yourself. I am just out there doing, like, video game moves alone.”

Like many comedians, a lot of his comedy comes from life experiences. A personal story that he’ll sometimes share on stage is how he was diagnosed with alopecia in August of 2017. He said it wasn’t that big of a deal, and that it didn’t affect him negatively at all. 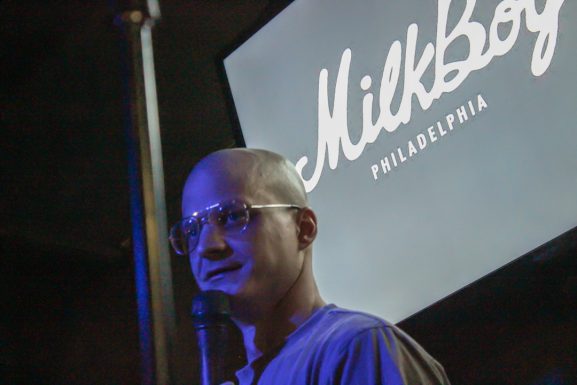 “I had a bad hairline to begin with, so it’s like, hey I didn’t really lose much,” Wood said. “People get that in like middle school. So, I think that’s rough.”

Brian Six is a close friend of Wood and co-creator of the show Nobody Died. The show started two years ago after the two performed at a bad comedy show and knew that they could do better. It got its name because they needed to call it something other than “stand-up stories.”

Their show recently returned at Creep Records, after a year-long hiatus. Themes for the show range from sex to fights and anything in between.

Six has seen how Wood changed as a comedian over the years and enjoys watching his friend perform. 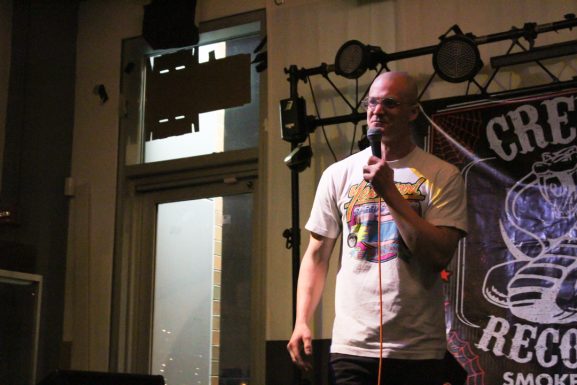 “He has his own way and I respect that,” Six said. “There are so many comics out there that are just doing the same shit. That just blends into the norm. Chris has been a guy that stood out and, you know, that’s why he’s funny.”

While Wood may be a mechanic so he can make a living, that doesn’t diminish how he feels about doing comedy and he hopes to be successful in both.

“Calling it a hobby hurts, I can’t do that I put too much work into it,” said Wood. “But also setting goals of things I can’t control, like – want to be this want to be that – it would be bad, I think. So, I just want to be as good as I can be wherever I am doing it. So just keep working at it.”

-Text, images and video by Chris Linvill and George Means

A now famous 2011 Pew Research poll found that America’s younger population differs greatly than past generations in regards to the notion of socialism. “Today, it has become much easier to talk about socialism,” said [continue reading…]