It takes a special person to coax a smile out of a caffeine addict who has yet to have their morning cup of Joe. Or maybe it just takes a guy named Joe.

Enter Joe Cesa. He has both categories covered. Bonus: He’ll make you coffee.

It’s 10 a.m. on a Tuesday and Cesa is standing on one side of a table that runs up the center of a 2,000-square-foot space in a portion of the former Goldenberg’s Peanut Chews factory. He’s not saying much, which normally wouldn’t be noteworthy for a person on the job, but Cesa is a talkative Italian. He’ll talk about his travels, his love for local businesses, his colorful résumé of food-industry jobs or his social-justice initiatives – somehow always finding the perfect place to slip in a jab at George W. Bush.

But the infectiously chipper Cesa isn’t just a talker.

“Some of us talk and some of us do,” said Andy Toy, a community economic and development leader who had a run for City Council in 2011. “He’s a doer and that’s what impresses me about Joe. He’s an entrepreneur in the best sense of it.” 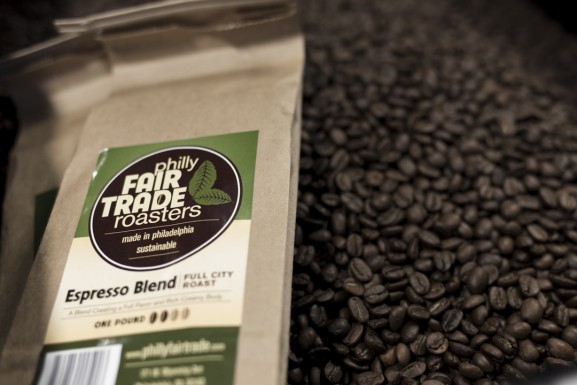 And in Cesa’s workweek, Tuesdays are dedicated to doing. It’s roasting day at his business, Philadelphia Fair Trade Roasters. Cesa, with the help of three other employees, is filling orders for the more than 70 wholesale customers who carry his beans.

It’s an assembly process of sacks-to-scoops to buckets-to-bags. There are scales, stamps and stickers. The contents of his silver travel mug lose volume as more and more packed bags of fair trade, organic coffee get placed on shelves ready to go out for delivery. But the most important part of the process for Cesa happens long before the 155-pound sacks of beans find themselves stacked on palettes in the Feltonville space on Wyoming Avenue.

The 63-year-old (or 107-year-old if you’re going off his calculations) is a big promoter of fair trade. When it comes to the coffee world, fair trade is a partnership that supports sustainable standards of working conditions and wages for coffee bean farmers to ensure they’re not exploited.

“The more I kept reading, the more it seemed like it was the right thing to do,” says Cesa. “I remember growing up watching newsreels of racial problems and social problems, and learning in school that we could do something about it. I’m probably the only kid in the class that felt like he actually could.”

In March 2002 he opened the door to Philadelphia’s first fair trade coffee shop, Joe Coffee Bar, at 11th and Walnut streets. Cesa served Equal Exchange coffee, but would later launch his roasting business from inside the shop and transition into selling his own beans. 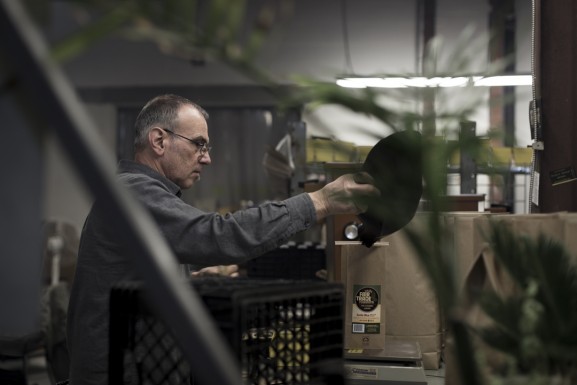 “The majority of people didn’t have a clue [about fair trade]. Some would come in and tell me that I’m crazy or that it’s some kind of scam,” says Cesa, who was inspired to open a café that mirrored the coffee culture in Italy he became smitten with during his travels in the late ’70s.

“I wasn’t running a church, but nothing’s going to change the system except people like me who just keep putting the word out.”

He continued to “do,” taking a trip to Nicaragua in January 2006 to visit two co-ops where he picked coffee with growers.

“Even if you think you know absolutely everything there is, there’s no experience like meeting someone who does this job every day of their life,” he says. “There are people who complain about fair trade, but I don’t want to hear complaints; I want to hear solutions.”

His business plan didn’t pan out as he imagined. He signed the lease to the location the day before September 11, 2001. It was an experience he describes as “a bad joke.” He woke up the next day to an incredibly different economy.

Forty percent of the money he saved evaporated. Nearby retail shops he hoped to rely on for foot-traffic went out of business. His location was next to the Forrest Theatre, which would significantly cut its performances in the years to come.

His emphasis on socially responsible products was ahead of the curve for folks who just wanted “a normal cup of coffee.” Joe Coffee Bar closed in May 2009 but Cesa was offered basement space in South Street’s Pumpkin restaurant to keep his roasting operation going.

His tiny roaster sits in a storage area in the Feltonville space that he’s worked out of for more than two years. 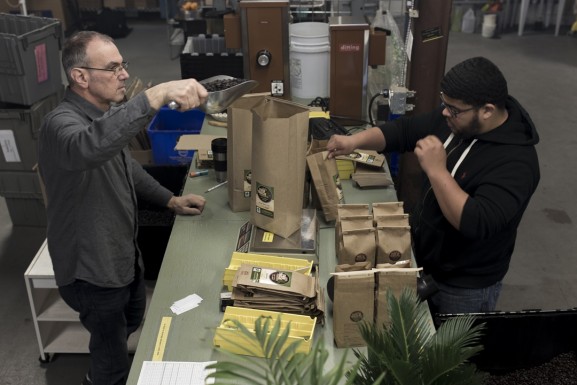 “We’re very fortunate because we’ve known each other for almost 20 years, so we’ve been able to work through the difficulties of running a business when things get difficult,” says his business partner Paul Marcus. “We both respect each other and the roles we play.”

Cesa has built a loyal network of customers and doesn’t mind taking on restaurants that other suppliers don’t find appealing because they’re small accounts. During the week he’s filling mail orders, donating product to nonprofits and dropping in to talk with customers.

“He loves having relationships with customers,” says employee Juan Ortiz (above), 20, who lives right across the street from the roasting space.“He knows how to give advice, and the right advice, to people because of what he’s seen and what he’s been through.”

“There’s nothing like walking in and there’s someone up to their elbows in dough and flour and they’re telling you how enthused they are about their day or week,” says Cesa, perched on a sack of coffee beans he can feel good about roasting.

He jokes that he may have lost most of his hair in the process of growing his business efforts, but feels good knowing he’s opening people’s eyes to make them look at what goes in to making their cup of Joe.

Hair for socially responsible gains? That sounds like a pretty fair trade.

– Text, images and video by Ed Newton and Cara Stefchak.