While walking through Point Breeze, it isn’t difficult to spot The Pharmacy, a coffeehouse on the corner of 18th and Wharton streets. On its outside wall, a large orange head spouting the number “1300” can be seen, signifying the shop’s 1300 S. 18th St. address.

A closer inspection reveals a sign that reads “Black and White Unite” on the window next to the front door, inviting people of all racial and ethnic backgrounds to come together to enjoy some coffee by day and a variety of musical stylings by night.

“The DNC was the busiest week we’ve had, to this day,” said Gary Viteri, the owner and operator of The Pharmacy. “One random day when people were making posters here, that was our poster that we put up there. That was our way of showing that we stand with those folks. In times like this, you may not have a place to go, so I think people appreciate that about this place.”

After moving to 16th and Wharton in 2009, Viteri decided to buy the property two blocks down in 2011. Since the shop’s official opening in 2014, Viteri has added a print shop for creating custom T-shirts in the basement. This past year, The Pharmacy also added a second room used to facilitate even more events and performances each night. 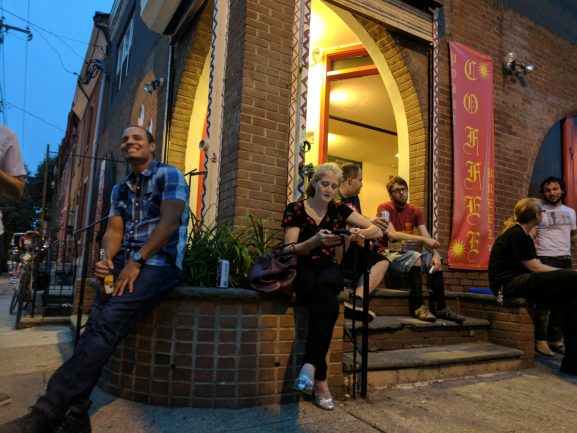 Although The Pharmacy has an active social media presence, it draws customers and concert-goers based on its reputation both in Point Breeze and the city of Philadelphia as a whole.

“I follow them on Instagram, but it’s usually spur of the moment when I decide to come,” said Kitty O’Malley, a resident of Mount Airy who has made her way to The Pharmacy several times. “I always come here when there’s some kind of band playing, whether it’s super loud and rockin’ or just a quiet acoustic show.”

Joe Reno, a musician who lives half a block away from The Pharmacy, is one of the most familiar faces found at the coffeehouse. Reno has played at the venue with multiple bands and has been a frequent presence both during the day and at night.

“It’s such a warm, welcoming place,” Reno said. “That’s one of the things that drew me to it immediately, even when I just came to get coffee. I don’t think it’s still in there, but when they first opened up they had straws and simple syrup and stuff on a broken organ. And they had a piano next to it that sounded janky, but it was awesome. And you could just go in and play it if you wanted.”

Reno knew Viteri through music, playing shows together and working the door at a couple shows Viteri was playing, but the two never got to know each other until the opening of The Pharmacy. Now most of Reno’s visits to the coffeehouse come during the day to get coffee, write music, send emails and spend time with Viteri. 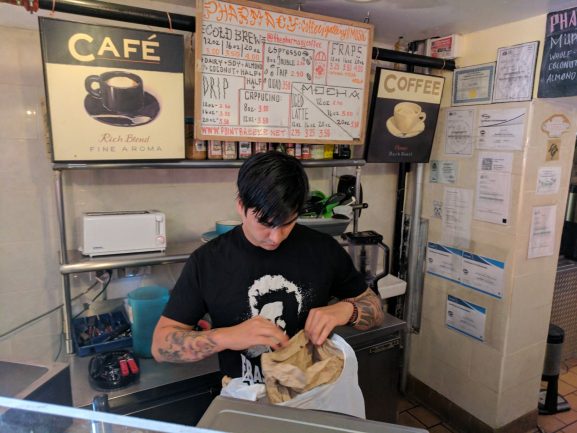 These days, Viteri can most often be found at The Pharmacy during the day, working as a barista and responding to bands looking to book shows at the coffee shop.

Throughout the month of August, Viteri’s band, Le Yikes Surf Club, has been on tour across the country. In the coffee shop’s earlier years, Viteri would close it down while going on tours. Today, however, he trusts his staff to keep things running smoothly at The Pharmacy.

“It’s almost like leaving your dog or your baby at home,” Viteri said. “You have to trust that they’ll be okay when you’re gone. You just have to check in on them.”

The Pharmacy has also been Viteri’s gateway back into the music scene. Following a brief stint as a student at Temple University, he followed his dream of being a working musician. Unfortunately, Viteri’s time in the music industry caused him to feel jaded and burnt out, his passion for music beginning to dwindle. Now, Viteri is once again excited to go on the road with his band, since playing and booking gigs is no longer the only thing he puts his time and energy into. These days, a part of his focus is local.

According to Reno, one of the greatest benefits of The Pharmacy is its ability to promote and showcase the arts in Point Breeze.

“It does a thousand things, but mostly it’s fostering art in a good community,” Reno said. “It’s a place for a bunch of people to go no matter what to enjoy good art and coffee. It’s the best atmosphere you can ask for.” 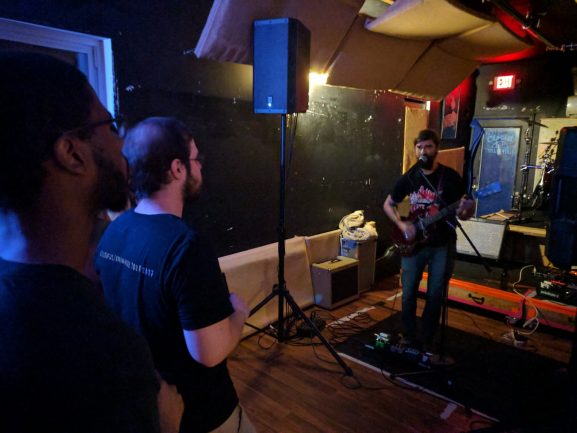 In a neighborhood with young families, twenty-somethings who aren’t far removed from college and residents who have lived in Point Breeze for decades, The Pharmacy strives to be a haven for people of all ages, races and ethnicities to come hear live music, see an art show or just enjoy a cup of coffee.

“There’s always been something that brings all people together,” Viteri said. “That’s the cool part that keeps us motivated. You’ve got an old-head who brings his own beer, and then you’ve got a young kid that’s really into music, and you have some hip-hop guys hanging over here and they’re all here checking out your band. That’s what’s so special, that without us, they wouldn’t even meet.”

-Text and images by Jonathan Ginsburg.

Chatter filled the lime green office that doubles as the entrance to Dixon Learning Academy at 2201 Moore St. in Point Breeze. The office staff busily worked while sneaking in a laugh here and there during the [continue reading…]

The Radio 104.5 Summer Block Party Concert Series has found success at its new home at Festival Pier on the Delaware River waterfront. The concert series, previously held at the Piazza at Schmidt’s in Northern [continue reading…]

Point Breeze continues to change. Redevelopment has led to new homes going up and businesses coming in, slowly replacing the blight and vacant lots that have plagued the neighborhood for years. But the more the [continue reading…]