When the Philadelphia Sports Congress, the Wells Fargo Center and La Salle University bid to host the East Regional round of the 2016 NCAA men’s basketball tournament, they hoped it would have an economic impact on the city of Philadelphia.

The 20,000-seat Wells Fargo Center, designed for big-time events, is anticipated to be sold out for all of the tournament games, organizers said. This will bring additional revenue to the arena and region while the Flyers and 76ers are on the road. Besides the economic impact, the community will also be influenced by the strong history of basketball in the city.

On March 25 and 27, the Sweet 16 and Elite 8 games for the East Region will be played at the Wells Fargo Center, hosted by La Salle University. This will be the 28th time Philadelphia has hosted NCAA men’s basketball tournament games and the first regional championship since 2001.

“Working with the Wells Fargo Center and Sports Congress, La Salle will be responsible for running the tournament from top to bottom,” Bonner said. “That includes hotel lodging for the teams, ticketing, working with the media and running the event.”

The Big Five, made up of Villanova, Temple, La Salle, University of Pennsylvania and St. Joe’s, in recent years has lacked in luring in national attention outside of the Philadelphia region because of its smaller size. Hosting NCAA March Madness games and other NCAA tournaments not only puts the city on display in a positive way but also generates tourism for Philadelphia.

“I think Philadelphia has proven to be a great host for not only NCAA men’s basketball, but also other NCAA sports like lacrosse, wrestling and ice hockey,” said Bonner. “The opportunity brings great exposure to the city. People travel to Philadelphia to support their teams, staying in our hotels, eating in our restaurants and visiting our attractions.”

There are specific factors that will determine just how much of an economic impact the games bring to the city. With a large number of spectators at the games being local basketball fans, the planning committee is hoping for intriguing match-ups, a team with mass appeal playing here, or a dedicated fan base willing to travel to help increase the number of visitors to the city. If the 2015 national champion Duke Blue Devils come to town as they did in 2013, Philadelphia can be sure to expect a large turnout.

Attendance could also benefit from a “Cinderella” team. Comcast SportsNet employee Kelly Ashe watched first-hand in 2013 as the Florida Gulf Coast Eagles upset Georgetown at the Wells Fargo Center, where her employer is based.

“With an upset like that, it drew in even more people for the rest of the games that weekend,” Asche said. “The underdog story is what I think people love most about the NCAA tournament, and seeing it in person brings it to life and keeps people who aren’t even basketball fans coming back for more.”

During the second and third rounds in 2013, the Philadelphia Sports Congress estimated that around 5,000 hotel room nights were booked by visiting teams, fans and media. A congress spokeswoman did not respond to requests for comment about plans for 2016.

Next March, there will be fewer teams traveling to the city due to the later round of play, but the Philadelphia Sports Congress is already estimating an economic impact for the region of $10 million, according to a statement.

With games on Friday and Sunday, visiting fans will have a full day on Saturday to explore the Philadelphia region.

“Philadelphia has a lot of unique tourist attractions like the Liberty Bell and Independence Hall, as well as such a fun nightlife in Center City,” former University of Pennsylvania band drum major Robin Acker explained. “And when you add in a major sporting attraction like March Madness, people are going to go out and spend money.”

This year Villanova University was the only Philadelphia region team to make the tournament, but fans still were drawn out to local sports bars like Fox & Hound Sports Tavern located at 15th and Spruce streets. Hostess Georgina Falcon commented on how crowded the bar has been during tournament games this year.

“We have people who come in rooting for colleges like West Virginia and other people who say we need this game put on and the team isn’t from around here,” said Falcon. “It can get pretty crazy in here during March Madness, and even more so when a game falls on the same day as a $2 pint night.”

Other establishments, including hotels, will see a considerable increase in customers next March. The Holiday Inn, located right next to Citizens Bank Park, as well as others in the area will begin to fill up with reservations when tickets go on presale in October.

The Philadelphia Sports Congress, La Salle University and the Wells Fargo Center have already started planning for the regional round games and will continue to do so to provide a memorable experience for visiting teams and fans next March. 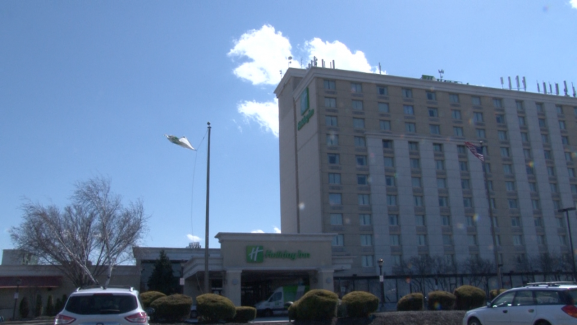 The once neglected park located at 20th and Tasker streets has transformed into a beautiful haven for Point Breeze residents to shoot hoops and plant vegetables. Urban Roots, a nonprofit organization in Philadelphia, collaborated with [Read More]

Philadelphia is known for having some of the most passionate fans in sports. Sometimes that’s a compliment. Other times, Philadelphians intimidate other team’s fans. For Philadelphia residents who are fans of out-of-town teams, gameday can [Read More]